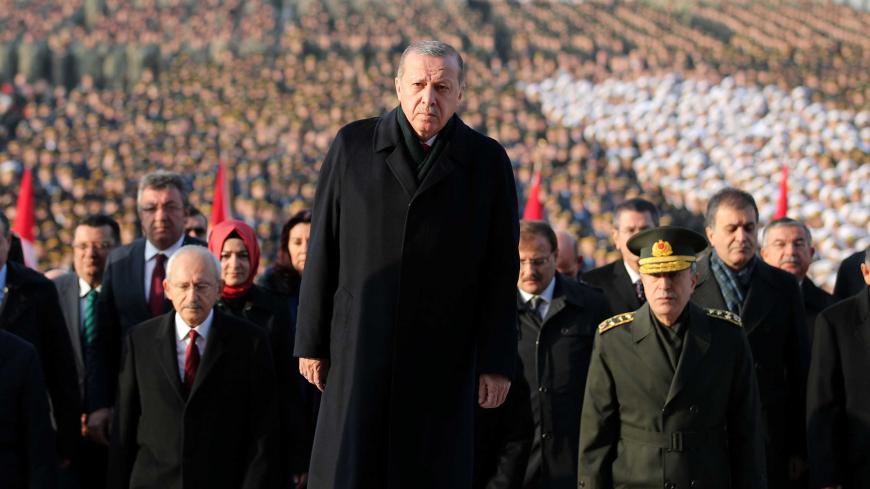 During an hourlong, live TV interview on Nov. 7 at Medyascope.tv — an independent, web-based, Turkish news platform — on the latest developments in the Middle East, I was asked what their impact could be on Turkish foreign policy in the region. The question referred to the recent dramatic steps taken by Saudi Crown Prince Mohammed bin Salman and the unexpected resignation of Lebanese Prime Minister Saad Hariri.

In my response, I characterized Turkey’s recent political moves in the region as a “headless chicken” running around to describe the way Turkey conducts its foreign policy in the Middle East.

President Recep Tayyip Erdogan threatens whomever it may concern, roaring, “We could arrive suddenly one night,” or “From Idlib to Sinjar, we will raze to ground all those who are adversaries. … We would not listen to anybody.”

Erdogan is not at all happy with the relationship and cooperation between Washington and the Syrian Kurds. He says at every opportunity that the latter are terrorists and a security threat to Turkey.

While Turkey — which sees Syrian Kurds as a threat to its unity — shapes up its Syria and Iraq policies and mobilizes its intelligence, security personnel, troops, diplomacy circles and government-controlled media outlets with this perspective, it reaches out to the Gulf and sets up a naval base in Qatar — therefore taking a pro-Doha stand in the conflict between that Gulf emirate and the Saudi Arabia-led Sunni axis stretching from the United Arab Emirates (UAE) to Egypt. It is also active in Somalia in the periphery of the Middle East and North Africa region.

The Turkish hyperactivity emphasized almost daily by the fiery speeches of Erdogan — and with the presence of people in uniform in several corners of the region — looks more and more to be a product of misguided policy, and with this misguided Turkish Middle East policy looking like a headless chicken running around, it is being noticed by an increasing number of Turkey experts.

One of those experts, Nicholas Danforth, a senior fellow at the Bipartisan Policy Center in Washington, tweeted sarcastically on Nov. 8, “After ‘zero problems’ and ‘precious loneliness’ I’d propose ‘angry pragmatism’ as Turkey’s emerging foreign policy doctrine in the Mideast.”

“Zero problems with the neighbors” was a phrase coined by former Foreign Minister Ahmet Davutoglu — the architect of the Justice and Development Party (AKP) government’s Middle East policy — to explain Turkey’s active engagement in the region along with its implicit objective to revive the Ottoman era. In the wake of the Arab Spring uprisings, Turkey’s “zero problems with the neighbors” policy transformed into a posture ironically underlined as “no neighbors without problems.” Erdogan’s spokesman, Ibrahim Kalin, described the situation as “precious loneliness,” referring to the policy of Great Britain in the last quarter of the 19th century — a time known as “splendid isolation.” However, there is no resemblance whatsoever to Britain’s adopted “splendid isolation” — which emanated from a position of strength at the global scale. Turkey’s “precious loneliness,” on the other hand, was a result of its isolated position in the Middle East. Kalin’s characterization had been a subject of mockery among foreign policy pundits.

Now, Turkey's foreign policy is sarcastically being characterized as "angry pragmatism" or the “policy of a headless chicken.” All suggest a misguided policy that displays itself in three spheres.

The first sphere is Syria. Turkey was blocked by a resurgent Russia in Syria following the downing of a Russian fighter jet in November 2015. It was cut off from extending any influence to its southern neighbor. Only after Erdogan’s apology in June 2016 did the reconciliation between Russia and Turkey begin, paving the way for Turkey’s incursion — Operation Euphrates Shield — in Syrian territory in August 2016. Moscow acquiesced to the Turkish presence in a triangular area in northern Aleppo in return for Ankara halting its support to the Syrian opposition in Aleppo.

Aleppo, in a way, was presented to the regime in Damascus via Russia. Russia, which acted with Iran, took Turkey’s hand and carried it to Astana, providing Ankara an image as an important player in the diplomatic arena on Syria. The presence of Turkey in Idlib province is also a product of the Astana talks.

The Turkish presence in Idlib is not to eradicate Hayat Tahrir al-Sham, which controls a vast area. It is to position itself to end the Kurdish self-rule in Afrin next door and prevent the Kurds from getting closer to coastal regions, namely the Mediterranean Sea. Such a goal can only be achieved with Russian connivance — and so far, the Russians have not shown that they will comply with the Turkish demands to dump the Syrian Kurdish Democratic Union Party (PYD) and its armed wing, the People’s Protection Units.

Russian Deputy Foreign Minister Mikhail Bogdanov brushed off Turkish protests regarding Moscow’s invitation to the PYD to attend the Sochi talks, although the date is not fixed yet for talks to be held between the Syrian regime and the opposition. Bogdanov said Russia sees the PYD as a Syrian organization, implying Turkey has no right to object to its inclusion among Syrian opposition groups. The worst rebuff came from Russian Foreign Minister Sergey Lavrov when — after Kalin alleged that thanks to Turkey’s opposition, Russia declined to invite the PYD to Sochi — Lavrov said the PYD will, in fact, be in Sochi.

Seemingly, Turkey’s Syria policy is not eye-to-eye even with Russia on the most crucial issue: relations with Syrian Kurds. It is where Ankara and Washington diverged and pushed the former into rapprochement with Moscow, regardless of the deteriorating ties between Turkey, the United States and NATO.

In the Syrian theater, however, Turkey does not seem to follow an independent policy of its own defined by its strategic interests, and it is increasingly dependent on Moscow’s endorsement or even at its mercy. Turkey looks like it is playing second fiddle to Russia and even to Iran.

The second sphere is Iraq. Turkey’s influence in Iraq was centered in the northern part of the country over the Kurdistan Regional Government. It exerted its influence through its very cordial relations with Erbil, a policy also dictated by economic interests. Kurdophobia prevailed in Ankara prior to the independence referendum on Sept. 25.

Turkey alienated itself from Erbil; in turn, Iran gained the upper hand in shaping the future of Iraq, including Iraqi Kurdistan, much more than Turkey could promote its influence. Turkey, the primary regional player — especially in Iraqi Kurdistan — resigned itself to a secondary position compared to the enhanced influence of Iran in Iraq.

The third sphere is the Gulf region. This is the area in which Turkey could have preserved measured neutrality in order to exert its regional weight when needed. However, by allying staunchly with Qatar, Turkey deprived itself of playing any role in the developments that pitted the Saudi Arabia-UAE-Egypt axis against Qatar. With Saudi Prince Mohammed — the architect of the anti-Qatar and anti-Iran policy of the kingdom — strengthening his grip, Turkey is finding itself in an odd relationship with Qatar and Iran against a Sunni axis supported by Donald Trump’s Washington.

With Lebanese Prime Minister Saad Hariri — who in 2005 bought 55% of the shares of Turkey's formerly state-owned telecommunications giant Turk Telekom and developed close personal ties with then-Prime Minister Erdogan — leaving his post, Turkey is left with no proxy in Lebanon, Syria's backyard.

The daily, fiery rhetoric of Erdogan is surely mesmerizing many Turks, but it remains short of concealing Turkey’s misguided Middle East policy.

It is an unsustainable region where the sands shift daily to reveal the image of a Turkish foreign policy that resembles a headless chicken. Angry pragmatism and anger do not produce lasting results in the Middle East.