Turkey's lira has sunk to a record low as the government lashes out at NATO and implies the United States is out to harm the Turkish economy. 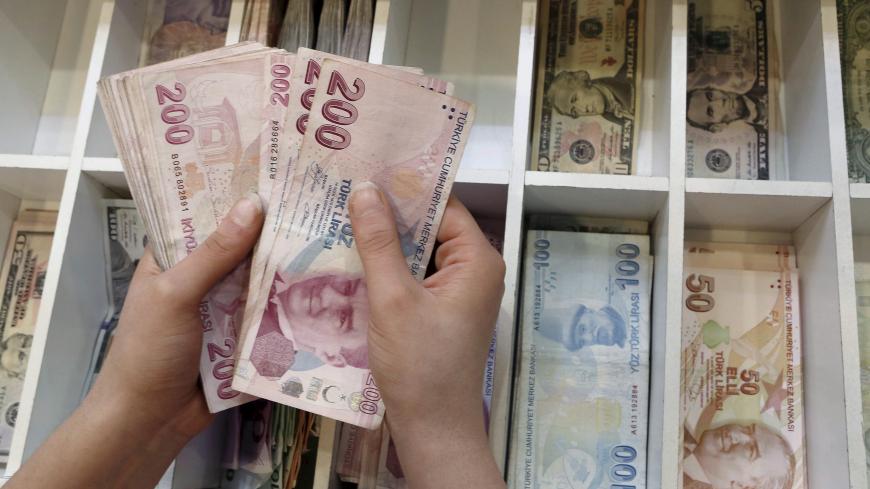 Turkey’s diplomatic feuding with the United States and other allies has unnerved investors, with the lira sliding to an all-time low and circles close to the government see a foreign plot to undermine the economy.

Deputy Prime Minister Mehmet Simsek, who oversees the economy portfolio, sought to reassure jumpy investors as the lira lost more than 2% of its value against the dollar this week, saying the recent sell-off does not reflect Turkey’s strong macroeconomic underpinning. The economy has proven resilient amid previous shocks, public expenditure is declining and the economy continues to grow, he told an economic panel.

“It’s true that there are serious problems in the medium and long term. But the serious fluctuations in the Turkish market need to be clearly understood, and it’s very important to read the picture correctly in a calm manner without panicking,” Simsek said. “The problems with the United States and the European Union are temporary.”

Investors are nervous about the impending trial of Turkish gold trader Reza Zarrab, set to begin in New York next month, on charges he violated US sanctions against Iran. Evidence could emerge that shows government ministers were complicit in a scheme to help Iran trade its gas for gold in 2012 and 2013, opposition parties contend.

Revelations could also prompt US authorities to levy billions of dollars in penalties on Turkish banks for violating the Iran sanctions, news outlets reported last month.

Deputy Prime Minister Bekir Bozdag said Zarrab’s trial was linked to a military coup on July 15, 2016, that failed to topple Erdogan — a frequent refrain from Turkish officials who imply that Washington had a hand in the putsch. “This trial is political, lacking legal basis. It is a plot against Turkey,” Bozdag said on Monday. “What failed on July 15 … is now using a series of economic sanctions, pitting Turkey against a new conspiracy.”

Bozdag’s remarks are the “same old song and dance from Turkey,” State Department spokeswoman Heather Nauert told a press briefing on Tuesday. “Making comments about the United States trying to foment a coup is simply ridiculous.”

A Turkey adrift from its Western anchor is uncharted territory, and investors fear it could unleash political instability and hamper ties with Turkey’s main trade partners, analysts say.

“The daily battle cry from Ankara scares people,” Atilla Yesilada, an analyst at GlobalSource Partners, told Al-Monitor. “Turkey’s decoupling from the West is not a new story [but] this is the cliffhanger effect: Nothing happens until you reach the cliff and stare into the abyss. Now it’s an issue. If there is a separation, it’s not going to be an amicable divorce.”

Erdogan lashed out at NATO this week and withdrew Turkish soldiers from the alliance’s military drills in Norway because his name and a picture of Mustafa Kemal Ataturk, modern Turkey’s founder, were depicted as enemies on a chart. NATO Secretary-General Jens Stoltenberg apologized for the incident, but a senior adviser to Erdogan said it was time to review Turkey’s 65-year NATO membership.

Erdogan has already moved closer to traditional rival Russia in recent months. On Wednesday, he flew to the Black Sea town of Sochi for talks with his Russian and Iranian counterparts on a resolution of the Syria crisis.

Turkey’s sparring with Western partners has cooled investor interest in Turkey because it contributes to a “lack of confidence,” wrote Milliyet columnist Mehmet Tezkan. “The problem is not economic, but political. Foreign investors are not coming because there is not a country left that we are not fighting with,” he said.

Foreign investment is key to financing the government’s lavish budget aimed at stimulating growth after the coup attempt and a widening current account deficit that hit $39.3 billion at the end of September.

The pro-government press railed against what it sees as an orchestrated attack on the economy. Sabah newspaper called it a “dollar operation” aimed at “bringing Turkey to its knees” over its robust foreign policy.

But a main driver in the lira’s fall is actually Turkish residents, Bloomberg reported. Local investors bought more than $250 million worth of foreign currencies in the week of Nov. 10.

The lira’s tumble will hit Turks’ wallets, whether it is higher heating bills this winter, since Turkey imports almost all of its energy, or as companies struggling to make payments on their combined $200 billion in foreign-currency debt are forced to lay off workers. That does not bode well for Erdogan, who has always campaigned on his economic successes, in a presidential election scheduled for 2019.

Already, consumer confidence has sunk to its lowest since last December, when Turkey’s economy was contracting, official data showed on Wednesday. Purchasing power is shrinking, poverty levels are rising, small businesses are closing and wages are not keeping up with inflation, wrote Yalcin Dogan on the independent news site T24.

“I don’t know how much longer the people will stand for this. This picture is one of the fundamental factors behind the alarm surrounding the 2019 presidential elections,” wrote Dogan.