More than a dozen Alevi homes were recently marked with red paint, setting off alarm bells for Turkey's largest minority group, which has a long memory of sectarian violence. 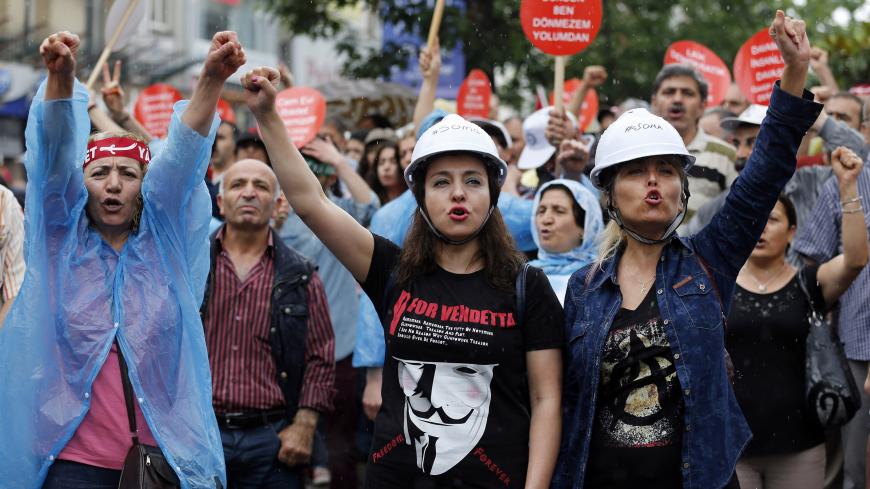 Alevi demonstrators shout anti-government slogans during a protest against the violence in Okmeydani, a working-class district in the center of the city, in Istanbul, Turkey, May 25, 2014. - REUTERS/Murad Sezer

Members of the Alevi religious community are on edge after vandals targeted several homes in eastern Turkey, recalling earlier violence against the country’s largest minority and rousing fears that a surge in nationalism is stoking ethnic tensions.

Late last week, assailants painted an ominous red “X” on 13 homes in the predominantly Alevi district of Cemal Gursel in Malatya, a conservative city of nearly 800,000 people, said the head of a local Alevi group, adding police had yet to make any arrests.

“We know this wasn’t a couple of hooligans because they knew which houses on which streets to target. It was definitely carried out in a deliberate and organized way,” Mehmet Topal of the Pir Sultan Abdal Cultural Association told Al-Monitor. “We have seen these markings before.”

The same tactic was used in 1978 in the nearby city of Kahramanmaras before right-wing gangs murdered 100 Alevis, Topal said. More than a 100 other Alevis were killed in three more massacres over the next two decades.

Minorities in Turkey fear ethnic and religious nationalism — sparked by a resurgence in fighting between the state and Kurdish militants in 2015 and a military coup attempt last year — will make them vulnerable once again to rights abuses or outright violence.

Religious rights have been restricted under the state of emergency introduced in the wake of the coup, the US State Department said in its annual report on religious freedom. Isolated attacks on synagogues and churches since this summer have terrified Turkey’s tiny population of non-Muslims.

“There is a toxic environment in Turkey for all ethnic and religious minorities, especially since the aborted coup with the surge in jingoism,” Aykan Erdemir, a senior fellow at the Foundation for Defense of Democracies in Washington, told Al-Monitor.

“Alevis have also become victims of scapegoating and hate crimes. What compounds the problem is Turkey’s culture of impunity. Perpetrators of hate crimes know that they will be treated extremely leniently by courts and often walk free,” said Erdemir, a former lawmaker in the main opposition Republican People’s Party (CHP) who drafted legislation with tougher penalties for hate crimes that parliament failed to pass.

The Alevis, heterodox Muslims who make up as much as 20% of the Turkish population of 80 million people, have long complained of official discrimination and a lack of government protection. Their faith draws from both the Shiite and Sunni branches of Islam, as well as Sufism and more ancient practices indigenous to Anatolia. They include both ethnic Turks and Kurds.

The state does not grant cemevis, where Alevi men and women pray together, the financial and legal benefits enjoyed by Sunni mosques, despite a 2014 European Court of Human Rights ruling that Turkey discriminates against Alevis by not recognizing them as houses of worship. Turkey has disregarded another order from the European court to amend compulsory religious education, opposed by many Alevis for its exclusive focus on Sunni Islam.

The prospects for such liberal reforms now seem even more remote, said Topal.

“The increase in nationalism and authoritarianism has cast darkness over this nation. Basic freedoms have been suspended under emergency rule, and pursuing your rights is considered a crime,” he said. “Whenever things start to go bad in these lands, Alevis become targets, whether fomenting Alevi-Sunni clashes is intended to create general chaos in the country or to intimidate us to leave our lands.”

A devout Muslim, President Recep Tayyip Erdogan has rolled back some restrictions on the expression of Sunni Islam under Turkey’s secular constitution, pledging to raise a “religious generation.”

“The increasing place of Islam in the public sphere — in the schools and in public discourse — necessarily puts Alevis at odds with the state,” said Howard Eissenstat, a Turkey researcher at St. Lawrence University and a senior nonresident fellow at the Project on Middle East Democracy. “Turkish laicism was never value-neutral towards Alevi [and] Turkish nationalism always had a Sunni tinge … but Alevis recognized that the most likely alternative was something even more self-consciously Islamic — and Sunni.”

Alevis tend to espouse a more liberal lifestyle than their Sunni peers and see secularism as their best safeguard against Sunni dominance. Erdemir estimates that 90% of Alevi voters support the opposition, with two-thirds of those casting ballots for the secularist CHP and the rest backing the pro-Kurdish Peoples’ Democratic Party (HDP). Erdogan’s Justice and Development Party (AKP) traces its roots to a banned Islamist political party.

Erdogan has over the years occasionally sought to win over Alevis, promising “openings” that would expand their rights and, in earlier elections, put Alevi candidates on the AKP ticket. As prime minister, he was the first to visit a cemevi, and he apologized for the 1938 massacre of thousands of Alevis in Tunceli province.

But he has also marginalized the Alevis, denigrating cemevis as “cultural centers” and repeatedly pointing out CHP Chairman Kemal Kilicdaroglu’s Alevi background.

A more overt menace is the AKP’s promotion of civilian loyalists who can turn into vigilante mobs, as occurred during the counter-coup in 2016. In Malatya, where religious and ethnic fault lines lurk just beneath the surface, crowds shouting “Allahu akbar” destroyed a bookstore to protest the coup.

“The AKP's increasing reliance on popular mobilization has increased the potential for violence or mob action,” Eissenstat said. “In a highly volatile and politically charged environment, small conflicts have the potential to escalate dangerously.”

After the recent vandalism, Topal said AKP and nationalist lawmakers expressed their opposition to the incident, and the Malatya police released a statement condemning the attacks for trying “to incite hatred and enmity among people in order to divide them.”

Two days after the Alevi homes were vandalized, an Armenian church association was pelted with stones when the office was empty. Only a few dozen Armenians still live in Malatya; they made up a third of its inhabitants before genocide during World War I annihilated the country’s Armenian population. Turkey denies that those killings amounted to genocide.

More recently, three employees of a Bible publishing house, including a German national, were tortured and murdered in Malatya in 2007. Nine years after the murders, a court sentenced three men to life and two military officers to lesser terms in a case some believe was a conspiracy to destabilize Erdogan’s government.

Minorities worry that they could again be pawns of shadowy forces that seek to exploit the country’s current discontents, said Garo Paylan, an HDP lawmaker and an ethnic Armenian. His family is originally from Malatya.

“They remember what happened to their grandparents, or even their mothers and fathers, and they know that it is in the current kind of environment that crimes can occur,” he told Al-Monitor.

“I’m not saying that the AKP wants that to happen. Some powers use minorities as a form of manipulation against each other [knowing] people are biased against these identities,” he said.