Russia is looking to revive its lapsed status as a major weapons supplier to the United Arab Emirates and to develop collaborative technology projects. 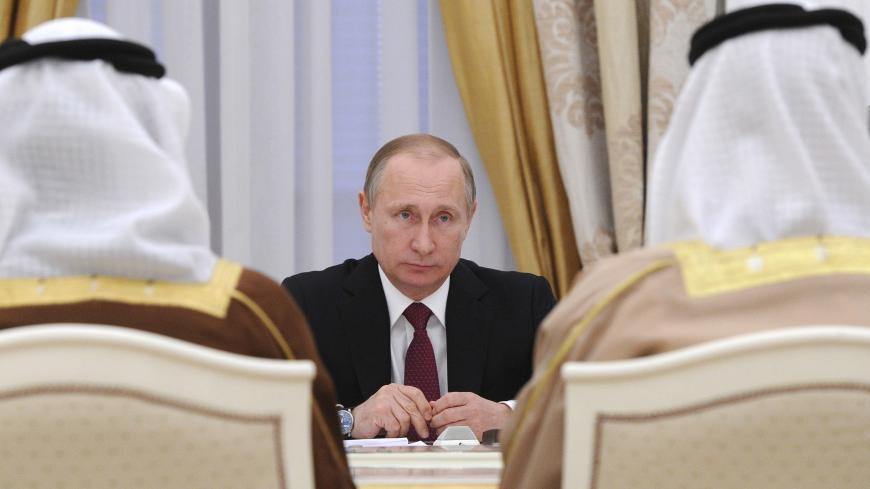 Russian President Vladimir Putin meets with members of a delegation, led by Sheikh Mohammed bin Zayed Al Nahyan, the crown prince of Abu Dhabi and the UAE's deputy commander in chief of the armed forces, at the Kremlin, Moscow, Russia, March 24, 2016. - REUTERS/Mikhail Klimentyev/Sputnik/Kremlin

Russia would like to sign up the United Arab Emirates (UAE) as a customer for its GLONASS (Global Navigation Satellite System) offering, possibly as a prelude to more deals with the UAE. Russian Minister of Industry and Trade Denis Manturov discussed the possibility during his Nov. 26 talks with Abu Dhabi Crown Prince Mohammed bin Zayed Al Nahyan as part of Moscow’s broader military-technical and economic outreach to the UAE.

In mid-November, a Russian delegation led by Vice Prime Minister Dmitry Rogozin and Rostech State Corp. CEO Sergey Chemezov was one of the largest at the Dubai Airshow, the biggest aviation exhibition in Asia. Moscow aspires to greater military-technical cooperation with Abu Dhabi and is keen to overcome the stagnation in this field observed after the 1990s and 2000s, when Russia was a major supplier of arms and equipment for the UAE military.

During that time, the UAE bought several series of BMP-3 infantry fighting vehicles that, according to Russian sources, are still the main combat vehicle in the mechanized brigades. The UAE also bought 9K38 Igla shoulder-fired missiles and BM-30 Smerch heavy multiple rocket launchers. In 2000, Russia agreed to create the Pantsir-S1 surface-to-air missile and anti-aircraft artillery system (SA-22 Greyhound) exclusively for the UAE military. However, that was the UAE's last large-scale military purchase from Russia, as the UAE had mainly finished its upgrades, having also bought tanks and aircraft from France, F-16s and Apache helicopters from the United States, and G6 self-propelled howitzers from South Africa.

At that stage, the UAE started to build a national military industry to produce arms and equipment on its own territory. Russian specialists also took part in this process, helping to build several types of armored fighting vehicles. Later, cooperation between Russia and the UAE military industries became limited, existing mostly as repair and service of the Russian armament already in use. In 2013, Russia agreed to provide the UAE with a new installment of Arkan anti-tank missiles for the BMP vehicles.

At the IDEX-2017 exhibition in Abu Dhabi in February, Moscow and the UAE agreed to develop military-technical cooperation. These agreements should stimulate new projects in bilateral collaboration. However, they should be seen more as declarations of intent, as Russia needs to provide more details that appeal to the emirates. The moves Moscow made at the 2017 Dubai Airshow are a clear step in that direction.

At IDEX-2017, the UAE had discussed only a tentative interest in the Russian Su-35 heavy air superiority fighter. But before the Dubai Airshow, Moscow seemed to shore up some contracts. Particularly, Moscow said the UAE military administration plans to buy 12 aircraft of this type. Rogozin personally showed the Su-35 exhibiting stand to the crown prince, who is also the deputy commander in chief of the UAE Armed Forces. A Russian aerobatic team demonstrated the Su-35 in the sky to double down on the positive impression of the Russian jets. If this agreement is fulfilled, the UAE will become the first Arab nation of the Gulf countries to buy Russian combat aircraft.

Yet the UAE’s actual interest in the Su-35 remains dubious. This aircraft is far from being innovative and is, in essence, a heavily modernized variety of the Su-27 from the 1980s. The UAE has a sufficient supply of combat aircraft and has already arranged the contracts needed for their renovation. The UAE may actually be hoping for a package deal including not only Su-35s, but some other Russian-UAE projects.

The emirates expect to receive technology from Russia that they can use as a basis for creating their own fighter aircraft. Such a project already has been started in collaboration with specialists from Serbia, although Serbian concepts were probably evaluated as insufficient for building a full-blown new generation of combat aircraft. On the other hand, agreements signed at IDEX-2017 reflect the UAE’s interest in collaborating with Russia to create a draft for a fifth-generation light multifunctional aircraft. In this program, Russia will be represented by the MiG Aircraft Corp., which proposes its MiG-35 model as a base for the project’s development.

Moreover, the UAE expects to provide Russia with UAE-built weapons, and this fact may be taken into account during the Su-35 negotiation. For instance, Russia could probably buy the United 40 drone, made by UAE company ADCOM System. Russia has said it's interested in purchasing this drone.

And if the UAE light multifunctional aircraft drafting project gives the emirates access to their partners’ military technologies, perhaps there could also be an agreement to produce the United 40 in Russia by license — which would become a great opportunity for Russia to learn about the world’s modern drone technologies and get access to the newest concepts in this field.

There is basically no political hindrance for Russia and the UAE to develop their military-technical cooperation, especially since the emirates still seek to diversify their pool of arms and equipment suppliers. On the other hand, growth in Russian supplies will be influenced by its timeline to begin regular production of new-generation arms such as the Su-57 fifth-generation fighter, T-14 Armata tank, Kurganets tracked platform, Bumerang APC, 2S35 Koalitsiya-SV self-propelled gun and others. Nowadays the UAE, having the necessary financial means, is mostly interested in purchasing brand-new types of military equipment. The Emirati arms market is virtually closed to the heavily modernized weaponry of the Cold War period that Russia still promotes.