Iraqi security forces seized Rawa, the last Islamic State-held town located in Anbar province, after a circuitous and dangerous journey to their destination. 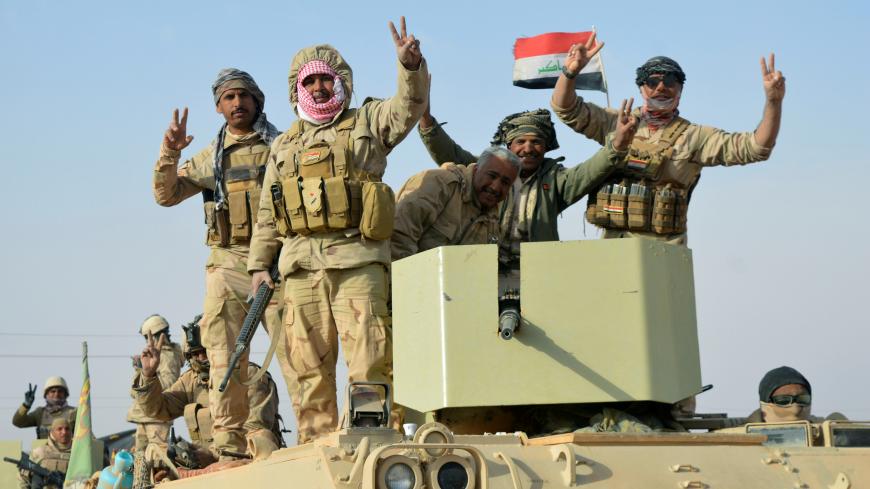 RUMANA, Iraq — After a week of long hauls through threatening desert terrain and villages to take up positions, Iraqi troops and local fighters on Nov. 17 captured Rawa, the last urban bastion held by the Islamic State (IS) in Iraq.

The operation to retake the city and the surrounding area had officially begun on Nov. 11 as part of the fight to recapture all of western Anbar province. The fighting got underway in September, after an initial push in January enabled preparations close to the major cities still under IS control at that time along the Euphrates.

Scores of tanks and armored vehicles, backed by international coalition airstrikes, approached the city on Nov. 14 via a circuitous route from the Jazeera Operations Command in Haditha and the Al-Asad air base in the town of Baghdadi. The journey required several hours of driving westwards on heavily damaged roads to the border town of Qaim, captured a week before, prior to crossing the Euphrates and essentially making a U-turn and heading back toward the east.

The 7th and 8th Divisions of the Iraqi army and local Popular Mobilization Units (PMU) trained by the international coalition were forced to traverse the only bridge in the area left usable for crossing the Euphrates, after years of airstrikes and destruction by IS, and then move toward the city via lengthy desert tracts and low-lying areas near the river. Only shortly before the final push began was a pontoon bridge installed across the Euphrates close to the city to facilitate movement from the southern bank.

Improvised explosive devices constituted a major threat en route, as evinced by signs of recent explosions along the road to the front, plumes of smoke arising from controlled detonations and the death of one member of a PMU militia's media team on Nov. 16. Casualty figures for Iraqi forces are not released as a matter of government policy, so it is not known how many troops were lost to the devices.

Suicide attacks were another significant danger. On Nov. 14, Al-Monitor arrived at the scene of an airstrike against a car bomb roughly 22 miles west of Rawa, along a desert road used by Iraqi forces north of the Euphrates. Bottles of orange liquid, bullets, ripped military attire and charred body parts of two long-haired IS fighters were strewn across the road near the wreckage of the car, which had departed a nearby village taken earlier that morning by Iraqi forces.

A half-hour after this reporter arrived at the front, Lt. Gen. Qassem Mohammedi, the head of the Jazeera Operations Command, told Al-Monitor that another attempted car bomb attack had simultaneously been launched from a different direction, but that it, too, had been thwarted by calling in an airstrike.

The Iraqi forces retook villages and brought in necessary heavy military equipment along dusty desert tracks that IS had been using since 2014 to move its fighters to locations across Anbar and farther afield. The western Iraqi desert has long been known for its precarious security and smuggling, even before the massive assault by the international terrorist group.

The media chief for the Iraqi army’s 7th Division took Al-Monitor to the front on Nov. 14 along these same desert tracks, where various wadis, including Wadi Houran, are infamous for serving as hideouts for insurgents and criminal groups.

Maj. Gen. Numaan Abd al-Zawbaei, the commander of the 7th Division, told Al-Monitor at the front that he had years ago lost parts of several fingers on his right hand during an attack in Wadi Houran when conducting checks at a base previously held by al-Qaeda in Iraq, the predecessor of IS. He said it happened “in 2013, three or four days before IS entered Iraqi territory through the border” with Syria in western Anbar province. IS took Fallujah in early January 2014, some six months prior to its more spectacular seizure of Mosul in June 2014.

Near the Euphrates on the road toward Rawa, corn stalks were high and tubes for irrigation systems lay along the roadside. The sheep and cows looked dazed as dusty convoys blasting “Ya Sattar” and other popular battle songs made their way through villages. Several “Ya Hussein” flags, evoking the historical figure revered by Shiite Muslims, flew from Humvees and armored vehicles alongside Iraqi national flags. Helicopters dove and swirled overhead.

Along the road, a teenage member of the PMU from Rawa under Hajji Muthanna told Al-Monitor that his unit was serving as ancillary security for the Iraqi army. He remarked, “[I've] been waiting for this moment for years.”

Vehicles carrying soldiers and officers wound their way through villages displaying a plethora of torn white sheets, white shirts, anything that could constitute a white flag, which the villagers had been told to put on their cars, homes and cattle sheds. Men with red-and-white checkered turbans and teenage boys and girls under 10 years of age ventured to the road carrying sick infants and toddlers, asking where medical treatment could be found. One officer put a 50-dinar bill into the hand of a man with a bundled, ill infant in the crook of his arm.

Bags of rice, boxes of biscuits and other food items were handed out as two male members of the Iraqi media took photos. This reporter was told by Mohammedi that she was the only journalist from a Western country at the front in Anbar. When asked why others were not present, Mohammedi said that Iraqi media had a presence on all the fronts, but that care was being taken with foreign media. “This is a fight against terrorists from around the world,” he said.

Al-Monitor spent several hours at one checkpoint, repeatedly being told to come back a week later when the operation would be over, and almost an entire day at another checkpoint before being allowed to travel with the media chief of the 7th Division to the front, despite having received prior permission from the Joint Operations Command (JOC) to cover the entire area of operations. No cellphone reception is available in the area.

Victory was declared on Nov. 17. Lt. Gen. Abdul Ameer Rasheed Yarallah said in a JOC statement that Iraqi forces had “liberated Rawa entirely and raised the Iraqi flag over its buildings.”

Part of the desert near the Syrian border remains outside the Baghdad government's control, but the taking of Rawa marks the de facto end of IS' territorial control in Iraq.