Newly released Pentagon figures show a surge in US troops deployed across the Middle East this summer. 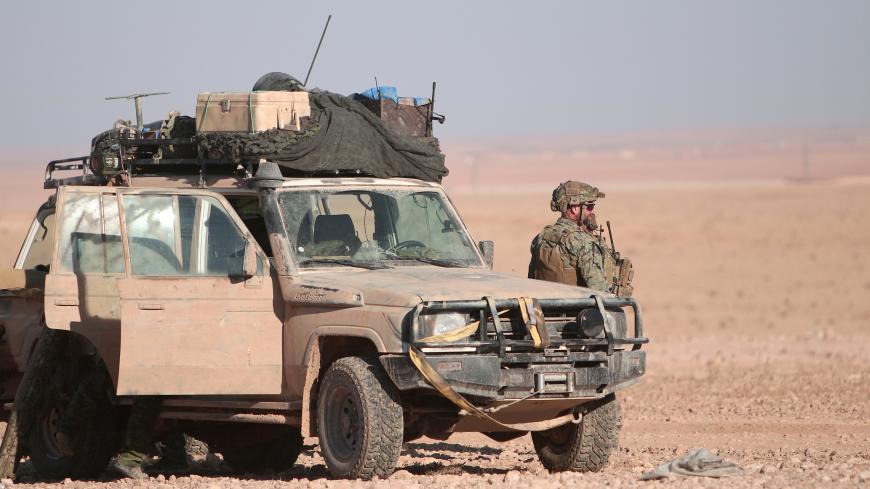 A US soldier stands near a military vehicle, north of Raqqa city, Syria, Nov. 6, 2016. - REUTERS/Rodi Said

The number of US soldiers and civilian support staff deployed to Syria and the broader Middle East surged by more than 30% over the summer, according to Pentagon figures.

A quarterly personnel report released late last week indicates that 54,325 US troops, reservists and civilians were stationed in the Middle East and North Africa during the three-month period that ended Sept. 30 — about 33% more than during the first two quarters of 2017. The increase holds true for combat zones such as Syria and Iraq as well as neighboring countries that host US military bases.

Until this summer, data produced by the Defense Manpower Data Center (DMDC), an in-house Pentagon organization, had consistently shown around 40,000 US troops, reservists and civilians in the region since the 2014 launch of the US-led mission to defeat the Islamic State (IS). The surge in Syria, however, predates this summer, with the number of US troops and civilians gradually increasing from 279 at the end of the Barack Obama administration by increments of 500 or so every three months under President Donald Trump, for a total of 1,723 in the third quarter of 2017 — six times last year's figure.

The most recent report counted a total of 1,723 personnel in Syria and 9,122 in Iraq between July and September, of which 1,547 and 7,402 were active duty troops, respectively. That's a sharp increase over the statistics for the first two quarters of the year and well above the numbers that the Defense Department publicly acknowledges. 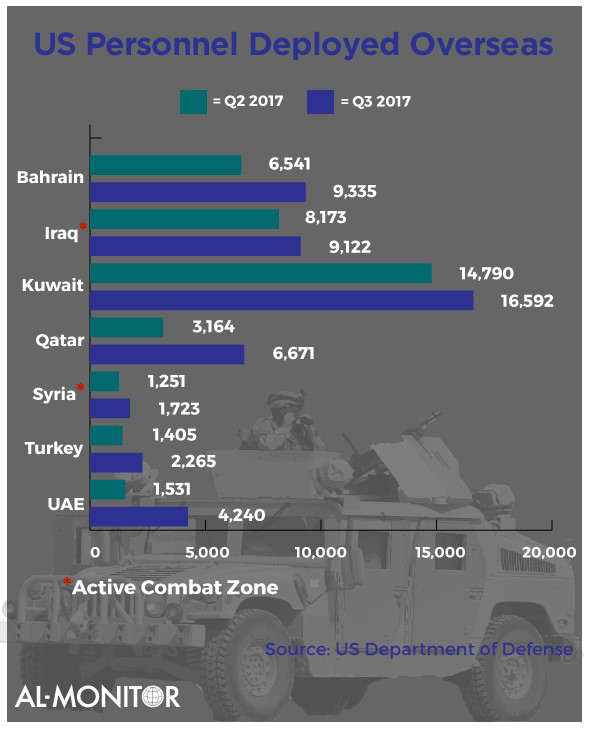 The Defense Department officially indicates that 5,262 US troops are serving in Iraq and 504 are in Syria under force management levels, which account for troops and units assigned to a specific mission. In August, Joint Staff Director Lt. Gen. Frank McKenzie and Pentagon spokeswoman Dana White said they planned to provide a more accurate public count of US troops in Iraq and Syria, including troops that rotate in and out on an as-needed basis, but Pentagon officials have yet to release those figures.

The force management figures do not count the hundreds of temporarily deployed personnel, such as US special forces that the Pentagon relies upon to advise US allies in the fight against IS, such as the Iraqi Security Forces and Syrian Democratic Forces.

While the quarterly reports are sent to congressional oversight committees, “there is a difference between minimally reporting military programs and activities to the oversight committees, and making them actively aware,” Zenko told Al-Monitor. “Just as members [of the House and Senate Armed Services Committees] seemed unaware of some Niger activities, I suspect that they did not know the extent of the silent surge to the region.”

Pentagon spokesman Eric Pahon told Al-Monitor that the data center’s accounting provides an unclassified estimate of personnel, mostly permanently assigned troops and civilians, but is not an official count, as the Pentagon and geographic combatant commands don’t centrally track temporary deployments. The quarterly accounting, Pahon added, can also over- or under-report “when there are delays in the systems for capturing the arrival or the departure of temporary deployed personnel.” That means the data center figures could indicate a larger US force presence by over-accounting for activity and movement of US troops, as opposed to their permanent deployment.

“This is a snapshot in time and isn't an accurate picture of troop levels in the Middle East,” Pahon said.

Still, the activity, given the regional context, is a significant uptick from previous Defense Manpower Data Center reporting.

In addition to the troop increase in hot spots like Syria and Iraq, the data center figures show the US could be rounding out contingents across countries with US bases that provide support for the anti-IS campaign.

According to the report, 2,000 troops surged into Bahrain, where the US 5th Fleet bases two aircraft carriers and 20 other ships.

Kuwait, where Al-Mubarak air base serves as a major staging area for US forces in the region, also got an influx of 2,000 US troops. The 82nd Airborne Division — a paratrooper regiment that took the lead in the train-and-equip mission in Iraq for most of 2017 — shipped in March.

And despite a Saudi-led blockade of Qatar, more than 3,000 US troops arrived in the country this summer. Qatar is home to al-Udeid air base, which provides long runways for US B-52 bombers to drop the Pentagon’s largest bunker-busting bombs against IS.

Nearly 3,000 American soldiers also poured into the United Arab Emirates, where Al-Dhafra Air Base serves as a major base of US air operations. Finally, an additional 840 US personnel surged into Turkey, home to Incirlik air base.