Israel, Jordan, the Palestinian Authority and other countries participated in a two-day firefighting exercise to build a regional disaster response system, yet some Palestinians criticized the drills as increasing normalization with Israel. 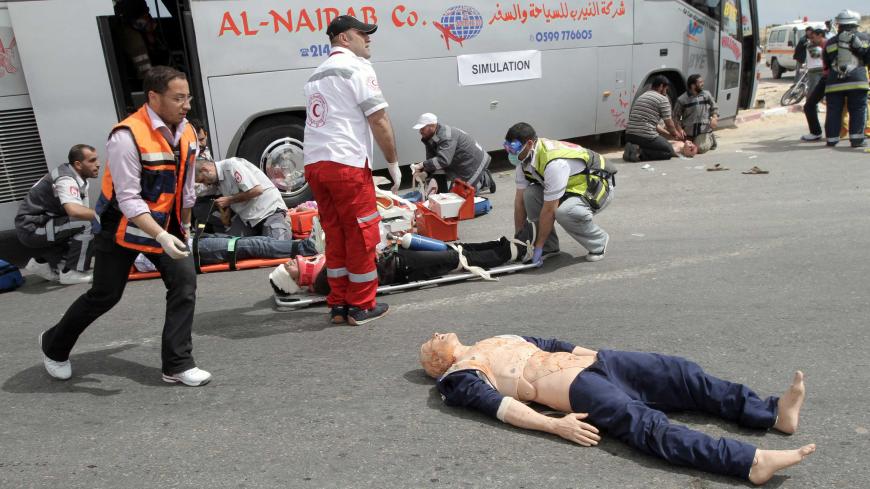 RAMALLAH, West Bank — A joint training on Oct. 24 in Israel between the Palestinian, Jordanian and Israeli civil defense units has been stirring accusations in Palestine of normalization. This training was held amid frozen security coordination between the Palestinian Authority (PA) and Israel, which was halted in July following security measures at the Temple Mount. Coordination fully resumed between the two sides on Oct. 27.

More than 400 people from Jordan, Israel, the Palestinian territories, Spain, Italy and France participated on Oct. 24-25 in a two-day, wide-scale exercise dubbed "Middle East Forest Fires" between Hebron in the West Bank and Beersheba within the green line. The event was held under the auspices of the EU and aimed at beefing up mechanisms to address natural disasters.

The exercise is a simulation of huge fires that might result in regional catastrophes; it demonstrates methods of cooperation among humanitarian relief teams to improve performance and exchange of information in emergencies among the region’s countries. The ultimate goal is to save lives and preserve nature, without allowing national affiliations to get in the way.

Palestinian political parties, bodies and committees have always criticized cooperation between the PA and Israeli institutions. This joint training received its share of criticism, as the Boycott, Divestment and Sanctions movement (BDS) condemned the Palestinian and Jordanian cooperation in the training as an act of normalization.

The BDS statement added, “The allegations claiming such normalization projects have their advantages are refuted by Israel’s exploitation of these projects to serve its settlement and occupational ends. Such projects give the impression that normal ties between Israelis and Palestinians under occupation are possible.”

BDS general coordinator Mahmoud Nawajaa told Al-Monitor, “The joint exercise is tantamount to normalization with Israel because there is no emergency. The Palestinian Civil Defense does not have to take part, and worse yet, its participation encouraged Jordan to follow suit.”

Meanwhile, Shadi Othman, the communication and information officer at the European Commission in Jerusalem, told Al-Monitor that “the joint exercise is part of a regional project under the EU auspices to extinguish fires and preserve nature in the region’s countries, regardless of the political circumstances.”

He added, “A single country cannot face a huge fire alone. This was the case of the Mount Carmel fire in 2010 and the 2016 fires in Israel, which necessitated the aid of neighboring countries, including the Palestinian Authority (PA).”

Othman further noted, “The project focuses on promoting coordination to face disasters. It is in line with the EU’s vision to bring about change in humanitarian issues and natural disasters like volcanoes, earthquakes and arson.”

The EU supports the Palestinian civil defense through occasional aid programs that included the two-phase capacity building program. The first phase consisted of handing over five vehicles for a quick response, nine vehicles for administrative support, 12 mobile lighting units and 15 generators in June 2015. Phase two that took off March 16 consisted of handing over 12 fire engines and ambulances.

Izza noted that the joint exercises are in the best interest of Palestinians. He told Al-Monitor, “As Palestinians, we have an interest in participating in such exercises because we have geographic links with Israel. If disasters occur or fires break out in Israel, we would be harmed. We should have the experience to face such prospects and to deal with aid and international aid teams. The various firefighting teams should be aware of their role and work mechanism regularly.”

Forest fires are the second most dangerous on the risk and priority scale of the Palestinian Civil Defense after earthquakes. The PA is trying to face this by forming a national team and system to manage the risks of disasters and crises. Izza said, “Forest fires are classified second on the scale of risks because most Palestinian regions have a geographic connection to forests with biodiversity. We are responsible for their protection. Floods, rain and snowstorms come in third place.”

Izza added, “The focus on coordination in road accidents stems from the Palestinians’ and Israelis’ use of the same roads and vehicles and facing the same risks. It is not possible to side with one party, religion or ethnicity at the expense of another when it comes to saving people’s lives.”

The Civil Defense refuses to implement exercises related to road accidents inside the West Bank. Izza said, “We hold our [joint] exercises within the green line areas. There is a political decision not to hold joint training in the settlements in the West Bank or their byroads. Besides, exercises have not been held before inside the West Bank, as the field work there is impractical."

Palestinian sources told Al-Monitor on condition of anonymity that Palestine, Jordan and Israel are inclined to build a regional team and a system to respond to disasters and dangers that might break out in the three countries.The sources indicated that the exercise will not be the last but will be followed by joint exercises in different fields in the coming months. “If a natural disaster happens, the three countries will coordinate together at the field level,” the sources said.