How much will it cost for Lebanon to reforest after wildfires?

Lebanon’s Civil Defense fought, with limited resources, a series of wildfires that ravaged the country. 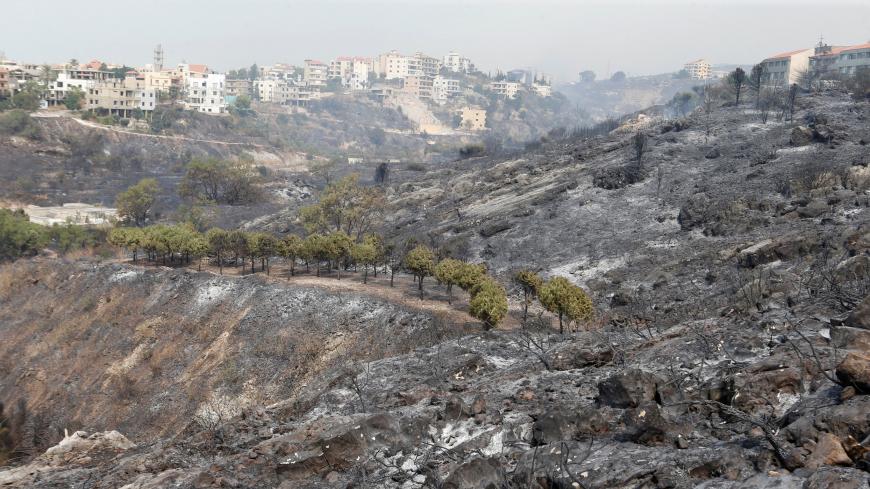 BEIRUT — Lebanon was ravaged by a series of wildfires Oct. 14 around dawn. Active firefighting operations ended Oct. 17, with Brig. Gen. Raymond Khattar, the head of the Lebanese Civil Defense, announcing that Lebanon had overcome "the crisis that resulted in a very sad environmental disaster."

Lebanon has not seen such wildfires for decades. Thousands of hectares of green areas were destroyed as the fires spread. The most dangerous fire was in al-Mushrif in the Chouf district. The fire spread to neighboring areas and was followed by a huge fire in the woods of Mazraat Yachouh in the Metn district.

Khattar announced Oct. 15 that there were 103 fires, with around 200 Civil Defense vehicles working to extinguish them.

As the fires spread overnight and throughout the day, they reached homes, cars and factories, causing severe material damage. Residents evacuated, and one Lebanese, Salim Abu Mujahid, died of suffocation while helping extinguish the fires.

Some high-voltage power lines were isolated to facilitate firefighting and maintain public safety, causing power cuts in some areas. For the Lebanese, the scene was frightening amid the smoke, burning trees and flying ash.

The rains on Oct. 15 helped quell the fires. Civil Defense volunteer Youssef al-Mallah told Al-Monitor, “The fires in Lebanon have subsided, but we are still keeping a close eye for the moment so we can intervene to extinguish any fire that may break out again.”

Minister of Interior and Municipalities Raya al-Hassan announced on her Twitter page the establishment of an operations room at the Grand Serail to follow up on the fires. President Michel Aoun, in an Oct. 15 statement, instructed concerned citizens to help the Lebanese who had to leave their homes.

Prime Minister Saad Hariri chaired a meeting of the National Authority for Emergency, Crisis and Disaster Management. He declared that he had contacted several countries to send helicopters to extinguish the fires, and stressed that investigations were underway to hold those responsible for the fires accountable, refusing to accuse anyone in particular.

Lebanese officers faced the fires and rescued civilians with scarce logistical equipment. The crisis worsened as wildfires took over amid a heat wave that began Oct. 13. The wind also played a major role in spreading the wildfires, said Sawsan Bou Fakhreddine, an adviser at the National Disaster Risk Reduction and Management Unit.

Lebanese newspaper al-Akhbar pointed out that an investigation conducted by the Lebanese army was based on three observations: First, it is unlikely that natural factors caused such fires, although such factors contributed to their spread; second, the fires began in specific spots in the middle of forests; and third, the fires spread in clear, determined lines.

Bou Fakhreddine said several factors indirectly led to the fires spreading, most importantly the neglect and lack of maintenance in the forests. The land was in need of clearing, so that dry brush was not so close to the trees. She added that low ground humidity, high temperatures and wind speeds of 50 kilometers per hour also contributed to the fires. Bou Fakhreddine said that other potential causes could be farmers setting fire to dry land and landfills, or someone tossing out a cigarette or grilling during a picnic.

“People have realized that the fires can reach a level that threatens their safety and their lives," she said. "Prevention is the key to reducing the fires. Forests must be cleared of dry [brush] before every summer. The proof is that no fires broke out in locations that were cleaned last year.”

Bou Fakhreddine said that land mines also prevented Civil Defense officers from reaching fires in some areas. She said that Lebanon also lacks special aircraft to put out some of the fires in the valleys. Army aircraft, she said, cannot operate at night, around power lines or in high-speed winds. Technical reasons made their intervention limited.

“The environmental cost will inevitably be high, especially as Lebanon is witnessing a rapid decline in forest areas and green spaces, which need many years to be replaced," she said. "Between 1,200 and 1,500 hectares [4.6 and 5.7 square miles] were burned out in a single day of wildfires. This is a very large number, as it is the equivalent of Lebanon’s annual rate of land lost in fires. Meanwhile, the economic cost cannot be calculated since the damage is so great as many forests, lands and agricultural crops have been destroyed. Farmers endured major losses, while properties, cars and houses were damaged, and the Civil Defense has exhausted its equipment.”

President Aoun instructed the High Relief Commission to compensate the families and owners of the facilities affected by the fires and to initiate an afforestation campaign.

Environment Minister Fadi Jreissati said Oct. 15, “The army commander has set up eight helicopters to extinguish the fires. A delegation will travel to Spain to buy two special aircrafts, other than the Sikorsky ones.”

Former Interior Minister Ziad Baroud said that the state “bought three Sikorsky aircrafts in 2009 to put out fires in coordination with the Lebanese army. They were used in 2013, but are now unusable due to a lack of maintenance.”