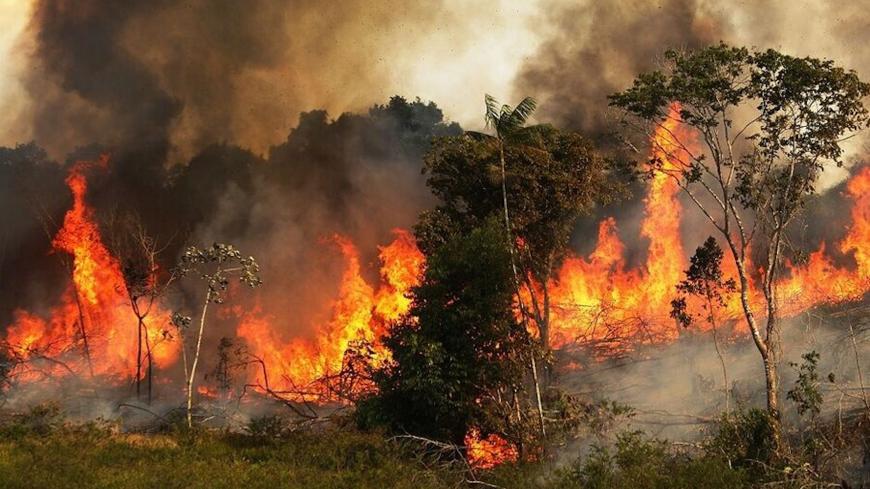 This image uploaded June 2, 2020 shows a fire in forests of the Zagros Mountains in Iran. - TWITTER/montaghe

Wildfires broke out in southwestern Iran during the last week of May and clawed their path up north and west, spreading across much of the Zagros Mountains and leaving behind a trail of irreparable destruction to the already endangered environment.

The flames have died down, but there is a heated debate among Iranians about the wildfires. Were they a natural disaster or the result of arson? Who is to blame for the government's slow response? What are the implications for the Iranian environment? And what could be done in the future to avert such a blow?

The Khaeez protected area in Kohgiluyeh and Boyer-Ahmad province was identified as the origin of the fires. Officials in the province announced that the initial flames were ignited by one of two local farmers engaged in a land dispute. The two, according to a local activist, were in custody no longer than one day.

But the fires, fanned by typical seasonal winds of the mountainous area, grew faster than expected, ravaging the green ranges and burning to death an unspecified portion of the wild population. Photos and videos quickly went viral of the threatened animals, including of partridge chickens desperately seeking shelter under rocks. Emotional calls from citizens and environmental activists “to do something before the mountain inherited from our ancestors dies in the fire” were shared on social media in an attempt to prompt timely action from the central government.

Local activists, some of had worked to extinguish the fires nearly barehanded, called for an institutional response, including the use of helicopters and air tankers. Mohammad Dasmeh, who has been involved in volunteer work as the secretary of a local nongovernmental organization and is an environmental lawyer in Khuzestan province, complained that no such helicopters were dispatched to the fire sites despite all the distress calls for several days. He blamed this on the “incompetence” of officials who stood by at a time activists needed “fans and fire flappers to put out the flames.”

Under Iran's laws, the country’s Defense Ministry and other armed forces are obliged to come to the rescue of the Forests Organization, affiliated to the Agriculture Ministry, at times of all disasters, including wildfires. Based on an earlier agreement, helicopters are required to be on standby in 16 designated stations to respond at any moment.

In the recent fires, however, a financial dispute between the Defense Ministry and the Forests Organization is widely believed to have hindered a workable response. According to Masoud Mansour, the head of the Forests Organization, the Defense Ministry refused to dispatch its firefighting helicopters because the department had failed to pay off its accumulated debts of 300 billion rials (approximately $1.7 million calculated on the free market exchange rate). Calls from activists to prioritize a rescue plan, therefore, remained unheard in the raucous blame game and amid bureaucratic hurdles.

After dayslong exchanges, the Planning and Budget Organization, as the higher authority allocating each government institution their share of the state budget, intervened by agreeing to shoulder half the amount owed by the Forests Organization. The move, nevertheless, was seen as too little, too late to handle a crisis of that magnitude. The amount, an environmental journalist reminded everyone, was the value of a fancy apartment building in Tehran’s affluent north and just another indication of the little importance Iranian officials attach to environment protection. For years, those activists have lamented that environment institutions are kept underfunded due to the official mindset, which typically has too many other sectors to prioritize.

Thousands of hectares of forests were burned in eight provinces along the Zagros range, which supplies 40% of Iran’s water demand and is a habitat for diverse wildlife, including at least 240 species of mammals, such as the rare and endangered Persian leopard, 200 bird types and 39 reptiles.

There also were reports about fires in several large parks and resort areas at locations disconnected from the Zagros Mountains.

Iranian experts have warned that the damage could be irreparable: It could take up to 80 years for the eroded soil and its lost organic matter to be revived, and half a century for the oak trees to thrive again, not to mention the vegetation barrier. The fires could also have a negative effect on water resources, which are fast dwindling in Iran.

As the smoke from the latest wildfires disappears, Iranian environmentalists worry that it’s only a matter of time before another domino-style wildfire returns with even greater magnitude. For years, the first responders to such disasters have been volunteers battling the unequal war by themselves. One of them, Alborz Zarei, has been receiving treatment at the intensive care unit of a hospital in the central city of Isfahan after suffering severe burns putting out the fires near Khaeez.

Part of the problem is that many people who fight for the environment have repeatedly faced accusations of advancing a political agenda “under the guise” of protecting nature. Over the years, volunteers, activists, NGOs and even employees working for the government-affiliated environment institutions have been closely watched by the security and intelligence apparatuses through a lens of suspicion.

A number of well-educated and prominent environmentalists were arrested in 2018. At least eight are still languishing in prison on suspicion of “espionage” and other political charges. One of them, Kaveh Madani, had returned to Iran in 2017 at the government’s invitation to serve as the deputy head of the Department for Environment. His mission to find a remedy for Iran’s water crisis remains woefully incomplete.

He did, however, manage to leave the country while temporarily released on bail. Currently a senior fellow at Yale and a visiting professor at the London Imperial College, Madani, addressing the recent wildfires, relentlessly criticized Iranian authorities he said were “doing nothing” and sitting idly by as mere “onlookers.”