The mountains of Iraq's Kurdistan region are threatened by man-made and natural wildfires that are difficult to control because of a lack of firefighting resources and manpower. 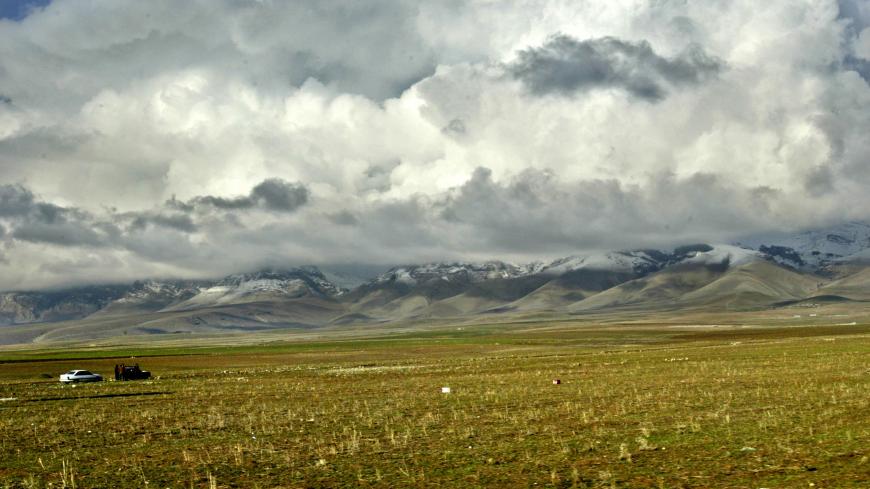 A general view of the mountains next to the town of Sulaimaniyah, Kurdistand Region of Iraq, Jan. 31, 2004. - REUTERS/Faleh Kheiber

SULAIMANIYAH, Kurdistan Region of Iraq — Hawraman Sajadi nearly lost his life a year ago trying to help firefighters during a forest fire in the Bafri Miri Mountains, in Iraq’s Halabja region, bordering Iran.

When fire broke out on that hot summer day last July, Sajadi and two friends had set out on foot to take food and water to the two dozen firefighters battling the fire. They were unfamiliar with the terrain. As they walked along, one of them spotted a sand-colored anti-personnel mine. Terrified, the group then noticed several more mines around them.

“We could see the fire raging in the distance, but we were trapped in a minefield,” Sajadi said. “We walked carefully along the dirt road, trying to avoid the land mines and hoped for the best.” There are 3,440 minefields across the Iraqi Kurdistan region, remnants of the Iran-Iraq War (1980-1988), according to the Iraqi Kurdistan Mine Action Agency.

The group survived and even managed to deliver the food and water to the firefighters. By the time the fire was extinguished, hundreds if not thousands of trees had been destroyed, Sajadi estimated.

“The [forestation and environment] police have no equipment for the mountains and use shrubs or branches of trees to put out the fires,” Sajadi, an environmentalist and wildlife activist in Halabja, told Al-Monitor. The firefighters lack personal gear, transport vehicles to get to the top of mountains, helicopters, hoses and adequate manpower.

“It is not only trees that burn,” said Sajadi, who has devoted the last 10 years of his life to trying to protect forests and wildlife. “A destroyed forest means snakes, grasshoppers, wild beehives, turtles and birds, including partridges, have been burned alive.” The World Wildlife Fund reported in 2014 that in the last 40 years, the world has lost half of its wildlife.

Wildfires are common in Iraqi Kurdistan, a scenic region where many Iraqis seek refuge from the summer heat. Several fires broke out across the Kurdistan mountains in June, burning acres of land and forests and wreaking havoc on animals. The region has considerable rainfall in spring, but the mountains, covered with lush vegetation and trees, are susceptible to accidental or deliberately set fires in the hot and dusty summers.

Forest fires have become a global issue. The Guardian cited data from Global Forest Watch asserting that the world lost more than one football pitch of forest every second in 2017. The destruction, some of it caused by wildfires, “poses a grave threat to tackling both climate change and the massive global decline in wildlife,” the report said.

The man-made decline in the forestation of the Kurdish highlands started several decades ago, when the Kurds took up arms in a guerrilla campaign against the central government. The mountains became a battlefield, with forests and vegetation going up in flames as a result of the fighting. Today, Iran and Turkey, which regularly stage attacks against the Kurds on the very same mountains, are destroying wildlife in the area.

While the Kurdistan Regional Government (KRG) has to an extent invested in the protection of the environment, establishing protected national parks and arresting poachers, who often cause wildfires, veteran activists like Sajadi say the KRG needs to do more.

“We went there to protect the trees last July, but we had no tools so we just broke off branches of the trees and started battling the fire,” Captain Zanyar Omar, a firefighter in Halabja, told Al-Monitor. “We are equipped for urban areas but not these mountains.”

Omar said that his department had asked for proper equipment for the mountains, but was told that the KRG is facing an acute financial crisis. There is no other option at the moment than to wait.

Not all the fires are in the region's mountaintops or distant valleys. Driving out of Erbil, Dahuk or Sulaimaniyah on summer evenings, one sees hundreds of cars parked by the side of the road, the driver and his mostly male friends having set up a table, opened a bottle of araq and fired up the barbecue. These fires, along with campfires, however, often result in disaster when they are hit by the gales in Sulaimaniyah, called the “black wind of summer.”

Two years ago, a fire destroyed almost half the pine trees on Goizha Mountain overlooking Sulaimaniyah. Two people were arrested. In the aftermath of the fire, a volunteer group planted 3,000 pine trees and dwarf oaks on the hill, and authorities took some limited measures to protect the area, such as mobilizing more firefighters and constructing protective strips cleared of flammable material and shrubs. Regardless, it likely remains only a matter of time before another fire breaks out.

The Bradost and Sidakan Mountains are home to nomads and their villages. They breed sheep, goats and cows, and some also harvest gum from trees, including Pistacia atlantica, which is ubiquitous across the Kurdish mountains. The fires often destroy these trees and pastures, with dire economic consequences for the nomadic communities.

Bakhtyar Bahjat, head of Halgurd-Sarkan National Park in the lush Balakayati Valley, near the Iran, Turkey and Iraq border triangle, is frustrated by the permanent damage being inflicted on the environment and the pristine forests in his area. “The burning of the forests on the mountains is a huge loss and has dire impacts on the ecosystem,” Bahjat told Al-Monitor by telephone. “We in Kurdistan are not very mindful of the environment. Tourists, shepherds, nomads and farmers sometimes cause fires accidentally.”

Military factors are also contributing to the environmental disaster. “The presence of Kurdish opposition armed groups has given Turkey and Iran excuses to shell these areas and start fires in the rugged mountains,” Bahjat said. The shelling is a punitive measure against the local population, as it seldom causes harm to the insurgent groups.

“In the dispute between humans, the wildlife and the vegetation are the victims,” said Bahjat, who also organizes sightseeing expeditions around the national park for international and local visitors. He remarked that the number of visitors wanting to climb Halgurd Mountain has dropped, due to security concerns and fighting in the area between Kurdish opposition groups and Iranian and Turkish forces.

With the fires of summer already beginning to engulf the mountains, Sajadi said, “I will continue to fulfill my civic duty, but the [KRG] government needs to take immediate action and provide adequate equipment to the forestry service as well as launching awareness campaigns about protecting the environment and wildlife.”