Secret amendment of Israeli order could cost 300 Palestinians their homes

Two years ago, Israel quietly amended a 2003 directive banning the construction of unauthorized settler outposts to include Palestinian homes and is now working to enforce it. 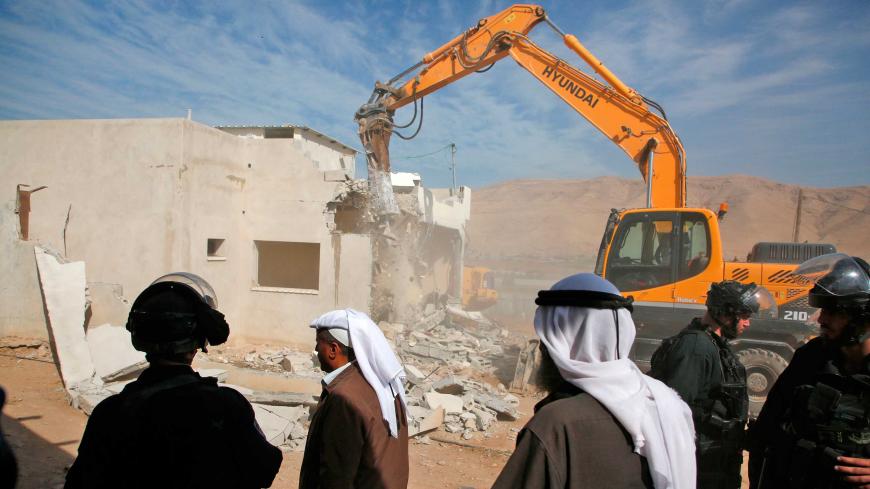 RAMALLAH, West Bank — Around 300 Palestinians in the northern Jordan Valley are anxious about their fate after the Israeli authorities decided to evict them from their homes.

Haaretz reported Nov. 13, “This is the first time the army is using an eviction order against Palestinians based on a military order meant to enable the evacuation of unauthorized settlement outposts." The order in question is known as the “order regarding unauthorized buildings.”

On Nov. 9, the eviction notice, dated Nov. 1, was left near primitive houses in the Ein el-Hilweh and Umm al-Jamal regions, inhabited by their residents since 1967. It ordered their evacuation within days and referenced the residents’ right to appeal within a period not exceeding eight days of the date of issuance.

“Israeli authorities tried to deny the residents this right by giving out the notice nine days after its issuance,” Nabil al-Jamal, a farmer in Umm al-Jamal, told Al-Monitor. “They broke into the area on Nov. 10 and photographed the houses and barns. When they left, we found the notice with a map of Umm al-Jamal and Ein el-Hilweh near one of the houses. By that time, the deadline for raising an objection had elapsed.”

Jamal and his family of 12 live in a tin house because the Israeli authorities ban the residents in Area C from building cement structures. Like other residents, he suffers daily harassment impeding him from making his living by herding sheep. Israel does not allow residents to lay down water pipes, bans grazing, closes roads and allocates land only to settlers.

Perhaps what most pains Jamal — who insisted that he and his family will not leave their home and land despite the Israeli measures — is that the directive under which the eviction notice is issued was initially dedicated to the evacuation of unauthorized Jewish settlements.

“My father and my ancestors settled in this land before the establishment of Israel. We are now being treated as illegal settlers and being denied the right to object to this eviction decision,” he said.

It should be noted that this military directive was drafted in 2003 to ban the construction of unauthorized settler outposts and was amended on Nov. 20, 2015, to apply to Palestinians. On Nov. 18, Haaretz was the first to reveal the amendment introduced in 2015, and it was only after an Arabic translation was published that the news made its way into the Palestinian press.

“Under this directive, the Israeli army commander of the area was empowered to enforce the eviction decision without advance notice, whenever he wanted and by force. This is dangerous to all villages in Area C, not just to Umm al-Jamal and Ein el-Hilweh,” said Moataz Bisharat, the head of Jordan Valley affairs in the province of Tubas.

He told Al-Monitor that the province turned to a committee of lawyers to object in the name of the residents. These lawyers argued that the 2003 military directive applies only to the settlers and not to the indigenous population in the Palestinian territories.

However, the appeal does not seem to be helping the residents, who face a tougher battle against the 2015 amendment of the military directive to apply to Palestinians in Area C.

For his part, Antoine Shalhat, the director of the Madar Center for Israel Studies, made a connection between the timing of the eviction notice and the unprecedented pro-settlement activities of the Israeli Cabinet.

He told Al-Monitor that Israel is trying to resolve the issue of these areas in favor of Israeli settlement activity in anticipation of any regional political development that could lead to resuming direct Palestinian-Israeli negotiations.

Shalhat said, “This order was formulated in 2003 to stop the phenomenon of building illegal settlement outposts and to end the construction of settlements by radical settlers in areas where Palestinian attacks were being carried out against settler targets. The order authorized the Israeli army commander in the area to evict the settlers violating the laws of the Israeli government regarding settlement in the West Bank.”

He noted that the newly revealed amendment includes Palestinian residential communities deemed illegal by Israel, such as the communities concentrated in villages and towns in Area C, mostly in the Jordan Valley and the northern mountains of Jerusalem, home to the Bedouin communities.

Shalhat explained, “This directive is dangerous, as it provides the legal mechanisms to allow Israel to take hold of these areas by deporting the entire residential communities, despite the existence of documents and aerial photographs proving that they are the indigenous population and legal owners of the land.”