Hamas strongly opposes the Palestinian Authority's insistence on bringing back the 2005 Agreement on Movement and Access at the Rafah crossing, seeing it as tantamount to imposing Israeli and European guardianship on their crossings again. 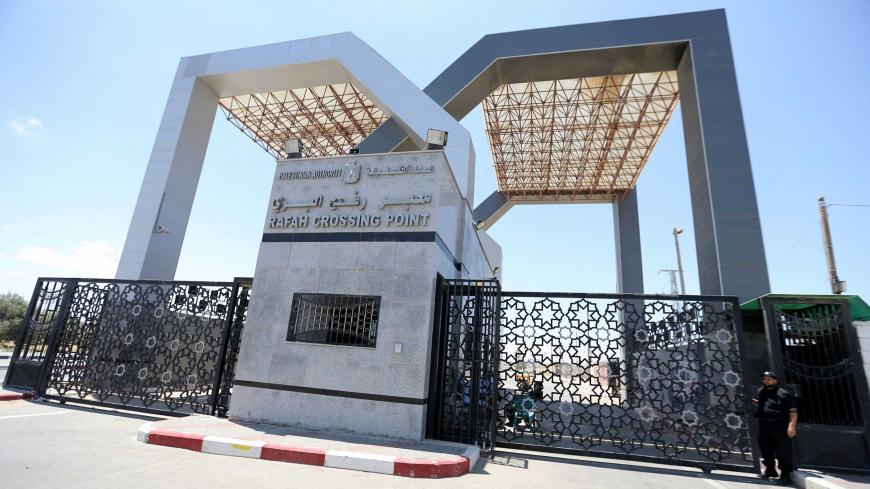 A member of the Palestinian security forces loyal to Hamas stands guard at the entrance of the Rafah border crossing between Egypt and the southern Gaza Strip, May 19, 2016. - REUTERS/Ibraheem Abu Mustafa

GAZA CITY, Gaza Strip — The Palestinian Authority (PA) wants to resurrect an old deal it made with Israel, but the pact is no more popular with Hamas today than it was 12 years ago.

As part of the recent Palestinian reconciliation between Hamas in Gaza and Fatah/PA in the West Bank, the PA took over administration of the Gaza border crossings on Nov. 1. The PA insists on reviving the 2005 Agreement on Movement and Access (AMA), which sets restrictions on the use of Gaza Strip crossings. Hamas roundly rejects the idea.

The AMA, which the European Commission supported, covered all Gaza Strip border crossings, including the Rafah crossing into Egypt, but was suspended in June 2007 immediately after Hamas took control of the Gaza Strip and expelled the PA’s security officers. As a result, the commission withdrew and Israel announced that the AMA was no longer in effect.

The PA says the AMA is needed now to guarantee security at the crossing. Hamas says the pact unnecessarily invites Israel and the European Commission to interfere in Palestinian concerns and will impede individuals' movements through the crossing.

Mustafa al-Sawwaf, a political analyst and former editor of the local Felesteen newspaper, believes the PA’s quest to revive the AMA is a bid to flirt with Israel and demonstrate that the PA is committed to the agreements signed between them. He told Al-Monitor that the PA’s insistence on cooperating with Israel is a betrayal and was labeled a crime under the failed 2011 reconciliation agreement.

“This is a Palestinian-Egyptian crossing, and Israel has nothing to do with it. So why is the PA insisting on the AMA?” Sawwaf asked.

Hussein al-Sheikh, head of the PA's Civil Affairs Authority, said in an Oct. 31 press statement that the PA will meet all the requirements to open the Rafah crossing, in accordance with the AMA, in mid-November.

Well-informed Palestinian sources in the Gaza Strip told Al-Monitor on condition of anonymity that Hamas and other factions are developing suggestions for how to operate the crossing without the need for the AMA. This will be discussed in dialogue sessions to be held in Cairo on Nov. 21.

Palestinians in Gaza can only hope the factions can persuade the PA to change its mind during those sessions. The AMA was used to prevent many Palestinian faction members from traveling through the Rafah crossing in 2005 and 2006.

Azzam al-Ahmad, a member of Fatah’s Central Committee, told Sawt Palestine radio Nov. 1, “All required arrangements have been made on the Palestinian side of the Rafah crossing, and the European police will be present in accordance with the 2005 AMA. The presidential guard will be deployed along the border with Egypt and will ensure the security of the crossing.”

A delegation from the European Commission visited the Rafah crossing Oct. 25 at the request of Kenneth Deane, head of the EU’s security commissions. Deane visited Israel and the Palestinian territories and met officials from both sides to discuss the crossing's future.

Nazmi Muhanna, the PA's director general for border crossings, told Al-Monitor the PA would not mind if the EU Commission returned to work at the crossing.

Shadi Othman, a spokesman for the Office of the European Union Representative in the Palestinian Territories, confirmed to Al-Monitor the EU Commission is discussing possible AMA implementation with the PA, Egypt and Israel, but so far no AMA signatory party has submitted a formal request for the commission to return to the Rafah crossing.

Israel's involvement is repeatedly cited as the deal-breaker to the AMA. Kayed al-Ghul, a member of the political bureau of the Popular Front for the Liberation of Palestine, told Al-Monitor, “The AMA must be suspended once and for all, especially since it restricts the Palestinians’ movement and reflects a direct Israeli presence at the crossing. The AMA confers to Israel the power to decide who gets to enter and leave Gaza.”

The AMA states, “The PA will notify the Israeli government 48 hours in advance of the crossing of a person in the excepted categories — diplomats, foreign investors, foreign representatives of recognized international organizations, and humanitarian cases.”

Ghul added, “The presence of the European Commission at the crossing aimed to ensure Israel's control of the movement of individuals. The computers and cameras that are inside the crossing are operated by Palestinians and Europeans and electronically linked to the Israeli army’s computers, enabling it to directly see everything that goes on at the crossing.”

Ghul pointed out that breaking free of the AMA is necessary because the Rafah crossing is located at the Palestinian-Egyptian borders, so Israel has nothing to do with it.

In the same vein, Yahya Moussa, a Hamas leader and member of the Palestinian Legislative Council, told Al-Monitor the PLC refuses to resume use of the AMA since the agreement is devoted to what he called Israeli dominance and guardianship of the crossing.

“In the last 10 years, the crossing would operate intermittently under the Palestinian-Egyptian administration without ever resorting to the AMA. This is why we find the PA’s insistence to adopt the AMA surprising because it only lasted for a year and can only be renewed with the consent of both parties of the agreement," Moussa said.

The presence of the European Commission at the crossing favors Israel, allowing it to control who gets to pass through the crossing and who does not, he said: “In the past, Israel would instruct the commission to withdraw [from the site] whenever it felt like it and close the crossing."