Palestinian factions, including Hamas, and the European Union have expressed support for reopening the Rafah crossing on the Gaza-Egypt border with the return of the Palestinian Presidential Guard and EU observers to oversee the movement of people and goods. 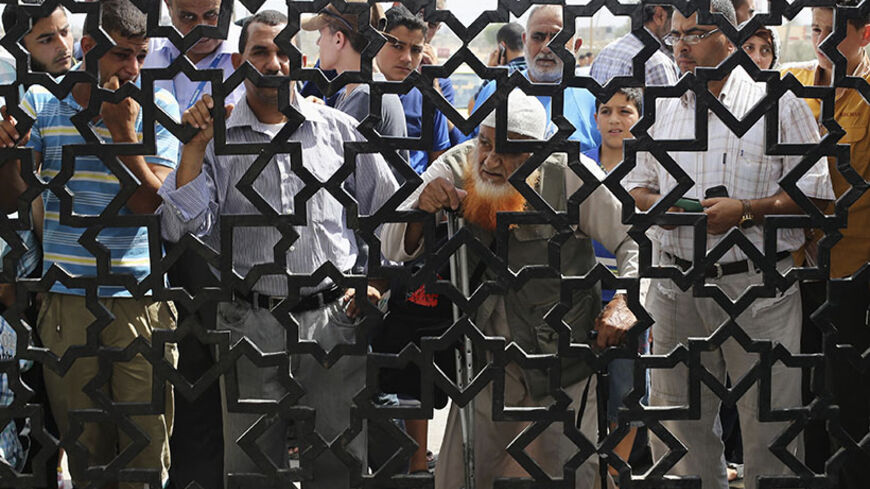 People hoping to cross into Egypt stand behind a gate at the Rafah crossing between Egypt and the southern Gaza Strip, Aug. 5, 2014. - REUTERS/Ibraheem Abu Mustafa

One word has been missing from the Egyptian-sponsored indirect Palestinian-Israeli talks and the various leaks about them: Rafah. The town along the Gaza-Egyptian border has become synonymous with some of the worst examples of Arabs' indirect contribution to the illegal siege on the Gaza Strip.

One of the main features of state sovereignty is the ability to manage customs for incoming goods. Even if Gazans were able to freely move goods in and out through Egypt, it would not be allowed to do the same in regard to Israel or the occupied West Bank because of the significant differences in the tax and customs code. At present, as a result of the 1994 Paris Protocol, Israel collects customs fees on behalf of the Palestinians and delivers them to the Ramallah-based government.

When the Gaza-Egyptian tunnels were in operation, this issue was irrelevant. With the tough anti-tunnel policies of the Abdel Fattah al-Sisi government, however, the legal transfer and assessment of customs on goods entering Gaza must now be readdressed.

Palestinians and Israelis have removed discussion of Rafah from the indirect talks, correctly arguing that it is a Palestinian-Egyptian bilateral issue. Palestinian negotiators have stated that they expect the 2005 agreement on movement and access, and the Rafah annex, to be the reference point for reinstating the crossing.

In a sign of its potential reactivation, the European Union (EU), which previously had been responsible for international supervision of the crossing in coordination with the Ramallah-based Palestinian government, has moved to approve the reinstatement of the EU Border Assistance Mission at Rafah. The Presidential Guard and EU observers had manned the Rafah crossing for two years, between 2005 and 2007, before Hamas took control of Gaza and kicked out security personnel loyal to Abbas. Gaza's various Palestinian factions, including Hamas, have publicly declared their acceptance of the return of the Palestinian Presidential Guard and the EU border mission.

The reopening of Rafah, however, will take some time. Palestinian security and customs officials have to be trained to handle their responsibilities. The Maan News Agency, known to be close to the government of Palestinian President Mahmoud Abbas, ran a long feature on the Presidential Guard, which is awaiting a decision by Abbas to begin training for posting in Rafah along with the EU observers.

Once a permanent cease-fire agreement is reached for the Gaza conflict, it is expected that the activities at the Rafah crossing will quickly be reinstated. Separate negotiations between the Egyptian and Palestinian governments will most likely begin the day after a cease-fire takes hold. A scheduled Abbas visit to Cairo on Aug. 22 — and the possibility of Hamas leader Khaled Meshaal accompanying him — will most certainly provide impetus to the talks on reopening the crossing. EU observers have already received a mandate from Brussels, and the Palestinian guards will most certainly get the nod from Abbas.

With or without the movement of goods, the reopening of Rafah on a 24-hour basis after the implementation of a permanent cease-fire would have a profound effect on the besieged residents of Gaza, who would consider it the most visible sign that the war and the siege of Gaza are finally over.