Jordan must decide whether to eliminate the government subsidy on bread to receive assistance from the International Monetary Fund. 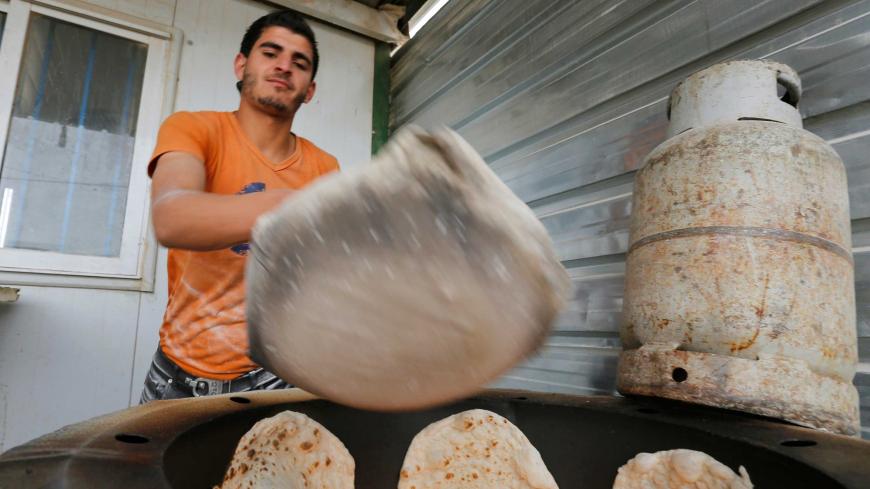 AMMAN, Jordan — Budget-cutters in Amman have bread subsidies in their crosshairs once again, as the government tries to satisfy the conditions of an International Monetary Fund (IMF) agreement designed to help the economically strapped kingdom. The subsidies have come under government fire numerous times over the years, with each episode sparking protests and riots. This time around, authorities are trying to justify their intentions by claiming that 3 million non-Jordanian residents benefit from subsidized bread, in addition to 7 million Jordanian citizens.

On a talk show that aired Oct. 28 on the Roya satellite channel, government spokesman Mohammad al-Moumani said, “A total of 140 million dinars [around $197 million] is spent to subsidize bread consumed by 3 million non-Jordanian residents.” He also alleged that some bread is wasted and some of it is smuggled into other countries to take advantage of the price difference.

With Jordan struggling under an economic crisis, the country's leadership is striving to meet the requirements of the IMF agreement signed in August 2016 to extend Amman $723 million in loans over three years to support the country’s economic and financial reform program. The requirements include removing budget distortions and lifting subsidies on goods within the scope of the economic adjustment programs developed by the IMF since 1989. Jordanian economists and opposition figures say such programs have dictated the economic policies of successive Jordanian governments.

“The IMF is imposing its policy on debtor countries, including Jordan,” the economist Fahmi al-Ktout told Al-Monitor. “It requires these countries, in exchange for obtaining new loans, to lift subsidies on goods, liberalize markets and trade, and raise direct and indirect taxes.” According to Moumani's statements on Roya TV, however, the IMF is just an adviser, while the government has the final say on lifting and distributing subsidies.

Previous Jordanian governments led by Prime Minister Fayez al-Tarawneh in 2012 and by Abdullah al-Nisour during 2014-16 attempted to lift subsidies on bread, a critical staple for Jordanians. Ultimately, the high political and social costs of those efforts thwarted their plans, amid the emergence of a nationwide protest movement after the outbreak of the Arab Spring in 2011.

“The IMF is asking the government to raise its revenues by certain percentages, and the government is thinking about the measures it can take to do so,” Salama al-Derawi, an editor and columnist with the Maqar news website, told Al-Monitor. Derawi estimates that lifting the bread subsidy would add about $100 million to the treasury. He also believes that revenue generated by raising the sales tax to 16% on some items currently taxed at 4% and 8% and some that are not taxed at all could produce an additional 500 million dinars ($705 million) toward the 2018 budget.

The Ministry of Finance expects the 2018 budget to total 9 billion dinars (about $12.7 billion), of which 7.5 billion dinars (about $10.6 billion) are current expenses, mostly allocated to pay public servant salaries. The indicative budget was estimated for next year amid unemployment rates that jumped in the first quarter of 2017 to 18.2%, up from 14.6% for the same period last year, according to the Department of Statistics.

In an interview with Al-Monitor, Jordanian political activists warned that the government's economic measures, including the removal of bread subsidies, will ignite popular protests like those in April 1989 and the bread price protests of 1996 against poor economic and political conditions.

Basil al-Bashabsheh, a political activist in Karak, told Al-Monitor, “Lifting subsidies on bread would harm Jordan’s middle and poor classes,” warning of “social protests and chaos,” especially in the south, where the economy is reeling. He accused the government of “resorting to intimidation maneuvers, in light of the violence in neighboring countries, forcing the Jordanian citizen to choose between security” and bread.

Trade union activist Mohammed al-Snaid also fears the repercussions if bread subsidies are removed. “This government decision could ignite popular protests and a revolution of the hungry,” he asserted to Al-Monitor. “The citizens’ economic and living conditions are going from bad to worse because of the economically fruitless government policies that further increase the burdens on the broadest and poorest class. The government ought to address the causes of indebtedness and not hold the society liable for its debts.”

Tamer Bino, spokesman for the National Alliance for Reform, a 15-member parliamentary bloc, doubts the government will raise fees and taxes to generate revenue for the treasury, opting instead for other economic alternatives. “The government should take into account the [public] reaction to the decision of lifting bread subsidies,” he told Al-Monitor.

Bino said the public probably cannot rely on parliament to keep bread subsidies in place, while also speaking of “official interventions” in the work of parliament members, some of whom might succumb to pressure or bribes or be “manipulated by the government and act as its executive arms.”

Meanwhile, Moumani asserted to Al-Monitor, “The government has not yet decided whether it will lift subsidies on bread or provide cash subsidies to Jordanian citizens.”

By one account, Jordanians are estimated to consume 10 million pita-sized loaves of bread per day, with their per capita annual consumption of bread estimated at 90 kilograms.