Israel in no hurry to enter Saudi-Lebanese fray

Israel is not at all interested in opening a front against Hezbollah just to please Saudi Arabia. 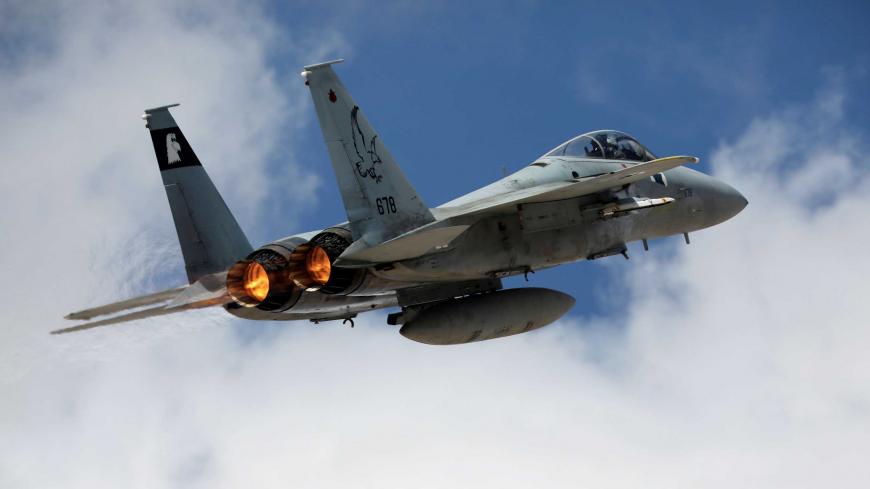 An Israeli F-15 fighter jet takes off during a joint international aerial training exercise hosted by Israel and dubbed "Blue Flag 2017" at the Ovda military air base in southern Israel, Nov. 8, 2017. - REUTERS/Amir Cohen

Lebanese Prime Minister Saad Hariri’s resignation Nov. 4 caught even Israeli intelligence by surprise. His disappearance in Saudi Arabia made the incident all the more mysterious. Embarrassingly, no one in Israel's intelligence community had a precise explanation in real time for this series of remarkable events, which caught the entire Middle East off guard.

"There is contradictory intelligence regarding financial debts," a senior Israeli intelligence official told Al-Monitor last week on condition of anonymity, in the middle of Israel's ongoing efforts to unravel the mystery surrounding Hariri's resignation. On Nov. 13, a senior Israeli Cabinet member told Al-Monitor on condition of anonymity, "Based on what we know, Hariri got into some trouble with the Saudis for his behavior. He also owes them lots of money. It is possible that he promised to deal with Hezbollah for them, but he didn't actually come through on this. At some point, they got fed up with him."

As to the question of whether he is being detained in Saudi Arabia against his will, the senior minister responded, "They handed him an offer he couldn't refuse. They also asked him to decide where he stands."

When asked whether the Saudis are trying to get Israel entangled in a war against Lebanon and Hezbollah, the minister refused to answer explicitly. "In principle, the Saudis don’t take anyone else into consideration. The crown prince is trying to lead a progressive and aggressive new policy," he responded.

Top Israeli security sources said on condition of anonymity that Israel had no plans to get entangled in a war with Hezbollah just because the timing is right for the Saudis. Earlier this week, the Israel Defense Forces (IDF) deployed Iron Dome anti-missile batteries throughout the country, but the reason was not tensions along the northern front. Rather, it was in preparation for an escalation of tensions on the southern front, along the border with the Gaza Strip. It came in the wake of Israel's detonation of a Palestinian Islamic Jihad terror tunnel Oct. 30, which cost that movement and Hamas 14 lives. Israel has intelligence that the Islamic Jihad is planning to launch a major retaliatory attack against Israel as quickly as possible. There has been a bevy of public warnings issued by Israel's top spokespeople, and the Cabinet decided not to take any chances and deployed Iron Dome anti-missile batteries to try to pre-empt any possible trouble.

At the same time, no one in Israel has any doubt that the main threat to stability in the region and the greatest chance of pitting the two main alliances against each other can be found along the northern front. Israel has the same strategic interests as the Sunni alliance, which includes Saudi Arabia, Egypt, Jordan, the United Arab Emirates and other Sunni states. Syria and Lebanon are part of the Shiite alliance, led by Iran. At some point, somewhere, these two alliances are likely to make the transition from guerrilla warfare and limited clashes in the region's more remote areas to a veritable War of Armageddon at its very heart. The Saudis are interested in having Israel do the dirty work for them, but as it turns out, not everyone in Israel is as excited about it.

As one senior security official in Israel told Al-Monitor, Iran is not an Arab state, but it is so influential that it can be said to dominate four important Arab states today: Iraq, Syria, Lebanon and Yemen. As the Israeli security apparatus is well-aware, this situation challenges the stability of the Middle East and sets the Sunni alliance's blood pressure soaring.

Over the past few years, Israel has been pushed to fill the vacuum that has been created by serving as the mainstay of the Sunni alliance. It did this by taking advantage of the Barack Obama administration's tendency to drag its feet and the ensuing US policy of ignoring the problem. Now Israel is learning that it will have to pay a "membership fee" because of its common interest with the Sunni alliance. It finds itself in the role of the stick, with which Sunni leaders threaten their mortal enemies, the Shiites.

Israel despises this role. The IDF knows that the next conflict with Hezbollah will almost certainly be joined by a recovering Syria and Iran, making it unlike anything Israel has seen so far. Exercises conducted by the IDF over the past two years include simulations of the recapture and liberation of Israeli localities, occupied briefly by Hezbollah. That group's concentrated firepower, backed by Syrian President Bashar al-Assad and Iran, can create a situation in which Israel's enemies are not the only ones to pay a steep price for getting into a conflict with it. So would Israel itself. That is why right now, no one in Israel, least of all Prime Minister Benjamin Netanyahu, is in any hurry to ignite the northern front. Doing so would mean getting sucked into the gates of hell.

According to reports, Israel's current involvement in the Sunni-Shiite conflict focuses mainly on intelligence gathering. Israel's intelligence capacities have a justly deserved reputation in the West, as well as throughout the region. On the other hand, Israeli's military support and the strategic umbrella that it provides remain, for the most part, in the realm of the theoretical. While there are quite a few reports of real Israeli military activity in the "Sinai District" of the Islamic State and on behalf of the Jordanians in the northern triangle, where the borders of Jordan, Israel and Syria converge, Israel has never confirmed the veracity of any of these reports or that it is engaged in such activities.

An Al-Monitor article a week ago reported that Israel had announced for the first time since the war in Syria erupted that it would not hesitate to intervene in order to protect the Druze residents of the Jabal al-Druze region in Syria near the Israeli border. On the other hand, this was a single, specific response with no real strategic revelations.

At this stage, Israel has no reason to collaborate with those forces trying to ignite the region. Israel's military might is considerably greater than its immediate rivals (Syria and Hezbollah), but it is still very vulnerable. In other words, Israel has a chance of winning, but it also has the most to lose. The country's economy is thriving like never before, with unprecedented, rapid growth. Its high-tech industry is soaring, and its cyber industry is taking off. But that is only possible because of the relative calm in matters of security. If that is interrupted, Israel will find itself caught in a very different game, one that it does not want to play.