Fixing Palestinian elections for 2018 offers Hamas some time to negotiate the preservation of its military forces in the Gaza Strip. 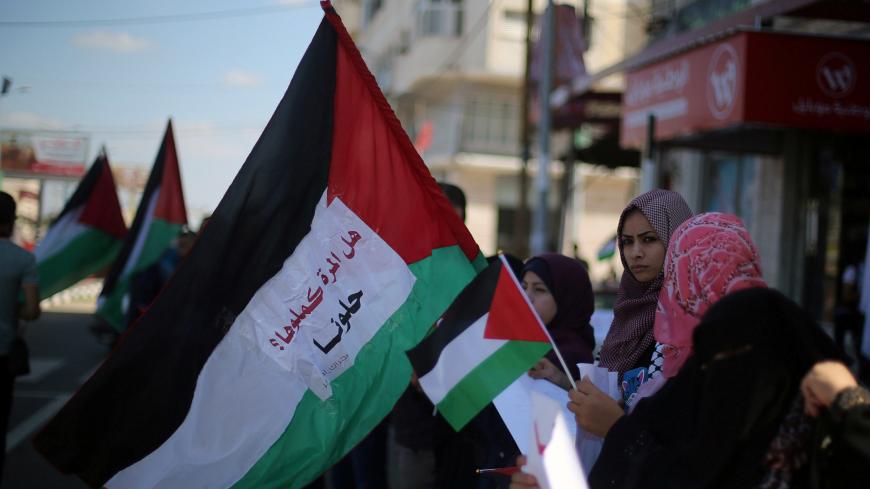 The credibility crisis between Hamas and Fatah regarding the reconciliation agreement signed by both parties Oct. 12 can no longer be ignored. Differences of opinion have deepened, and in the last round of talks in Cairo on Nov. 21, the post-signing smiles were replaced by anger and open recriminations. It would seem that the gaps between the sides cannot be bridged.

The first to express his frustration and announce that the reconciliation had reached a dead end was top Hamas official Salah Bardawil, the delegation member representing Hamas in the Cairo talks. In a video clip he disseminated (and then deleted shortly afterward, evidently under Egyptian pressure), Bardawil grumbled that Fatah is trying to sabotage the reconciliation. The Hamas official decisively declared that the talks had already failed, though his movement was determined not to adopt any drastic steps in the meantime.

On the other hand, Hussein al-Sheikh, the Fatah delegation member to the talks, accused Hamas as the party guilty of placing obstacles in their path. Sheikh contended that the Palestinian government was not given responsibility for even 5% of the Palestinian Authority's (PA) civil spheres of responsibility in the Gaza Strip, and that the weapons issue has not been resolved at all. Sheikh argued that Hamas does not really accept the "one weapon, one law" principle, where the PA is the sole governing and security authority.

Israeli observers are keenly following the talks taking place between the sides. As my colleague Ben Caspit wrote in Al-Monitor, while Prime Minister Benjamin Netanyahu made statements against the reconciliation, Israel has been actually trying to do what it can to make the reconciliation succeed, almost from the moment the plan was conceived. Israel supported the reconciliation due to Egyptian and American pressure. And there was probably also the component of Israel's clear interest in resolving the humanitarian crisis in Gaza.

Members of Israel's security system hold that in spite of Egypt’s efforts to promote the Palestinian reconciliation and in spite of Egypt's threats to both sides, both Hamas and Fatah are trying to stonewall the talks so as not to be blamed for the failure of the reconciliation. Beyond that, Hamas longs to maintain the breath of fresh air offered by Egypt to Gaza by opening the Rafah crossing on condition of reconciliation. Palestinian President Mahmoud Abbas, for his part, desperately needs Egyptian President Abdel Fattah al-Sisi's support for his planned diplomatic actions at the end of his tenure. Therefore, despite the distrust between the sides and the clear understanding that neither side is really and truly ready to forfeit or compromise on its iron principles, Hamas and Fatah continue to go through the motions of discussions and debate.

According to an Israeli security source who spoke to Al-Monitor on condition of anonymity, Hamas' actions are especially interesting because it teaches us about its intentions on the ground over time. Research analysis, said the source, shows us that the central pillar of the strategy adopted by the Hamas leadership is that of stalling for time in order to survive until the winds change direction.

Hamas, said the source, is a movement whose DNA requires it to take a break when its situation deteriorates. Thus, for example, every time that Hamas was felled by the Israel Defense Forces and weakened almost existentially, it initiated a "tahidya" (calm) that allowed it to survive, rehabilitate itself and then strengthen itself.

The source said Hamas leaders now seek an internal and regional tahidya that will allow the movement to survive the difficult days in the first stage and then consolidate its vision for the future in the second stage. The source said Hamas' goal is to conquer the central Palestinian government, which would enable the movement to maintain and preserve its important assets, mainly its military wing. In other words, it seems that the Hamas movement has its eyes fixed on conquering the West Bank.

In October, it was publicized that Jordanian King Abdullah II rejected the request of Khaled Meshaal, the former head of Hamas' political bureau, to open a Hamas office in Amman, evidently as part of the plans of the former leader to conquer the PA presidency in the post-Abbas era.

At the onset of the Cairo talks last week, both sides announced that they had come to an agreement on holding PA elections at the end of 2018. It was the Hamas delegation that had pushed to quickly set a date for elections, even before resolving the major issues. From Hamas' point of view, that is enough time for it to take advantage of the tahidya to organize itself and plan for the elections.

According to the security source, Hamas' vision has adapted itself to the dead-end reality in which the movement finds itself, including Abbas' iron-clad demand that Hamas disarm itself as a precondition for reconciliation. As Hamas sees it, its only option is to conquer the PA, just like in 2006 when Hamas took over the Gaza Strip. At that time, Hamas also had its back to the wall and came to the conclusion that its only option left was elections, although Hamas at the time did not imagine it would achieve such a rousing victory.

Toward the end of the second intifada (March-April 2004), Israel began a series of targeted killings of Hamas' diplomatic leadership. Within a month, Sheikh Ahmed Yassin and his successor Abdel al-Rantisi were eliminated. The movement's leadership, headed by Meshaal, was forced to make a historic strategic agreement: to stop the suicide attacks against Israelis, stop the intifada (Hamas was one the intifada's prime leaders) and transform the movement's center of gravity to politics instead of terror. So to survive, Hamas decided to organize itself toward elections. Today, it may have come to the same conclusion for the very same reasons.

A future victory in the 2018 elections, when the "one weapon, one law" option is on the table, will allow Hamas to retain its assets. Until then, all that remains for it to do is to play reconciliation games.

"In this long time span, anything can happen," the source concluded. Like in the Yiddish tale, "either the nobleman will die or the dog will die." In other words: Either Abbas will resign or something else dramatic will take place that will cause the public to forget all about the dismantling of the military wing, Hamas' pride and joy and bastion of strength.