When visiting Jerusalem 40 years ago, Egyptian President Anwar Sadat had a vision for Israeli-Palestinian peace, but he was led astray. 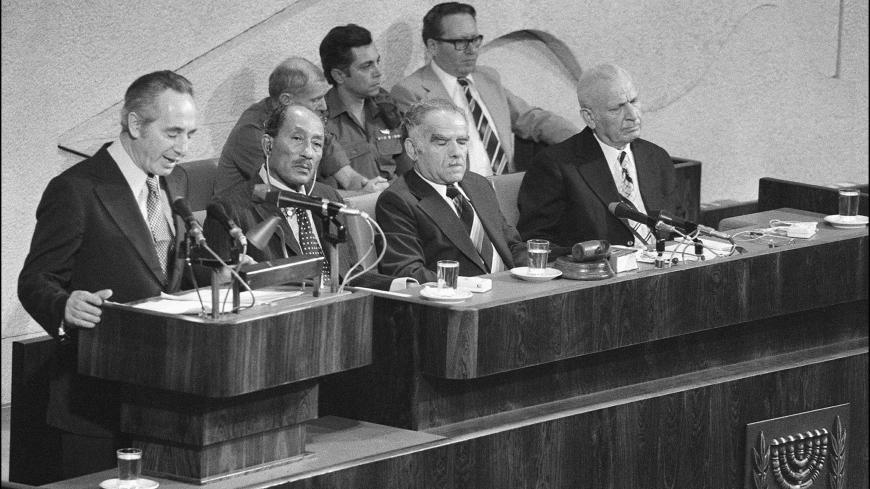 “We are turning Israel into a rising global power,” Prime Minister and Foreign Minister Benjamin Netanyahu bragged on Nov. 13 in the Knesset plenary. “There has never been anything like this in our history.” Indeed, let us look at what Israel's illustrious statesman has done in just one week, as he outlined in his speech.

He met with an envoy of Japanese Premier Shinzo Abe who brought with him an invitation for Netanyahu to visit his country. He received a warm missive from “another friend,” US President Donald Trump, who thanked Israel for its support of his position on the Iranian nuclear program. Netanyahu received a congratulatory note from Chinese President Xi Jinping for the burgeoning special relationship with Israel. He also made preparations for a visit to India and spoke with Russian President Vladimir Putin. In addition to all of the above, Netanyahu had time for a call to the Egyptian President Abdel Fattah al-Sisi to discuss “important security matters,” of course. What else could they talk about? A Palestinian state? Renewed negotiations with the Palestinians?

Netanyahu’s dialogue with Sisi was conducted over secure phone lines. Netanyahu and his ministers are not welcome in Egypt. It took the assassination of an Israeli prime minister, Yitzhak Rabin, in November 1995, for an Egyptian president, Hosni Mubarak, to visit “unified” Jerusalem, to take part in the funeral. The Egyptian government is even refusing to dispatch a senior envoy to mark the 40th anniversary of the historic visit by President Anwar Sadat to Israel. His widow, Jehan Sadat, announced that she has no interest in taking part either. Israel will have to make do with the Egyptian ambassador, Hazem Khairat, at a Nov. 22 event at the official residence of President Reuven Rivlin.

In Israel’s view, Sadat was the first Arab leader in the modern era who came to the Jewish state bearing a message of peace. From Egypt’s perspective, Israel led Sadat astray, and he sold Israel peace with the largest Arab nation in return for a pittance. From the Palestinians' perspective, Sadat sold them out.

Forty years have passed since Sadat declared in his landmark Knesset speech, “Even if peace between all the confrontation States and Israel were achieved, in the absence of a just solution to the Palestinian problem, never will there be that durable and just peace upon which the entire world insists today. … In all sincerity, I tell you that there can be no peace without the Palestinians.” Nonetheless, the Israeli occupation of Palestinian territories continues and even deepens, while the Egyptian flag is hoisted daily under the Tel Aviv sky. Four decades after Sadat announced from the Knesset podium that he had not come to make a separate peace, it turns out that mighty Egypt and little Jordan have forged peace with Israel, leaving the Palestinians behind.

Yet, Israel complains about the cold winds blowing from its southern neighbor. Rarely does one hear an Israeli diplomat pointing an accusatory finger at his country’s leadership, but it happened at a Nov. 8 conference sponsored by the Begin-Sadat Center for Strategic Studies at Bar-Ilan University and the Foreign Ministry to mark the 40th anniversary of Sadat's visit. Shalom Cohen, a former Israeli ambassador to Egypt, said, “Even as we rail against Egypt for a lack of normalization [in ties with Israel], we must look inward, at ourselves as Israelis, and ask what the Israeli government has done to change this state of affairs.” Cohen then lashed out, “I don’t recall that we did much.”

The only thing that could fundamentally change the state of the Israeli-Egyptian relationship for the better would be an end to the Israeli-Palestinian conflict, which would extricate the flags of Egypt and Jordan from their isolation in Tel Aviv. Netanyahu, however, is doing everything in his power to perpetuate the Israeli occupation as well as the separate peace with Egypt and Jordan. He is even mobilizing the peace agreements with them in the struggle against the Palestinians.

At his historic June 2009 speech at Bar-Ilan University, Netanyahu praised the peace treaties with Egypt and Jordan, which resulted in an end to various disputes with Israel and of the conflict with them. He called on Arab leaders and the Palestinians to follow the road taken by Sadat and Prime Minister Menachem Begin and by Rabin together and Jordan’s King Hussein. Netanyahu neglected to mention that Sadat had insisted that the article regarding the West Bank and Gaza precede the article on Egypt in the Framework for Peace in the Middle East agreed to in the September 1978 Camp David Accords.

The agreement’s preamble sets out that the agreed upon basis for the peaceful resolution of Israel's conflict with its neighbors is UN Security Council Resolution 242, “in all its parts.” The resolution, which marks its jubilee on Nov. 22, stipulates that Israel must withdraw from “territories” — as per the English version, or “the territories,” in the French version — that it conquered in June 1967. Professor Mati Steinberg, a Palestinian affairs researcher and Middle East expert, underscores that there was good reason that Resolution 242 referred to Israel’s “neighbors” and not “between Israel and the Arab states.” The language was designed to denote that the resolution includes the Palestinians too.

In the same breath in which Netanyahu called on the Palestinians to follow in the footsteps of Egypt and Jordan and end the conflict with Israel, he added a fundamental precondition for ending the conflict with Israel's occupied neighbors: “the public, binding and sincere Palestinian recognition of Israel as the national homeland of the Jewish people.” Steinberg believes that if Israel had demanded of Egypt and Jordan to recognize it as the state of the Jewish people, peace agreements with them would not have been achieved. Steinberg reminds that Begin removed from his agenda the demand that Egypt severe its alliances with Arab states and grant clear preference to its agreement with Israel, a demand that Israel repeatedly raises in talks with the Palestinians.

At the conference on the Sadat visit, Ambassador Khairat said, “The entire region has undergone many changes, and there are interests of various players who are taking advantage of the situation of chaos and terrorism for their own ends. Despite this, at these moments, there is a chance for important cooperation.”

The envoy further asserted, “In Egypt we learned that it takes a statesman, not a politician, to make peace.” Some of his listeners thought the Egyptian ambassador was referring to an Israeli politician, Netanyahu. They remembered a prime minister standing in the same place on June 2009 to reveal to the world that his vision of peace is for “two free peoples living side by side in this small land, with good neighborly relations and mutual respect.” During the bad eight years since that event, the politician Netanyahu has turned the statesman Netanyahu’s vision of peace into unrealistic dreams. Israel could very well be, as Netanyahu said, a “rising global power.” It is too bad that he is not interested in using this global power and finishing what the statesmen Sadat and Begin started.