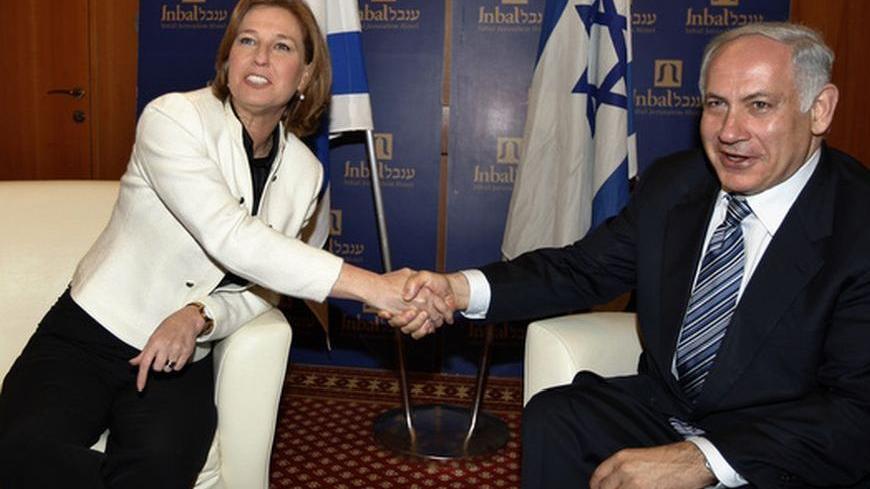 The citizens of Israel have the right to realize at long last what is hiding behind the peace mask of Israeli Prime Minister Benjamin Netanyahu. And there is only one person who can expose once and for all his true face — Tzipi Livni.

There is not a single political commentator in Israel who believes that on January 23, the day following the upcoming election to the Knesset, Netanyahu will have to pack up his stuff and leave the Prime Minister’s office. The big question of the forthcoming parliamentary election is who's going to sit around the government table next to the ministers of Likud Beitenu. The favorite candidates are the parties known as “the natural partners”: the far-right, nationalist alliance of HaIchud HaLeumi-HaBayit HaYehudi and the ultra-Orthodox parties, Shas and Yahadut HaTorah. Most probably, Netanyahu will not make do with this limited list of coalition partners. His first tenure as prime minister (1996–1999) taught him that in order to lead a tough, nationalist political line à la Likud Minister Ze'ev Binyamin Begin, he would have to put on a sheep’s clothing. In his present term in office as prime minister, it was Defense Minister and former leader of the Labor party Ehud Barak who provided Netanyahu with the sheep’s clothing, along with a certification label testifying to its authenticity.

However, now that Barak has crushed the Labor party and subsequently dismantled his splinter party when announcing his intention to retire from politics, Netanyahu is in need of a new sheep. He will apparently offer the vacated position to the Labor party, led by Shelly Yachimovich; to the Hatenua party, led by Tzipi Livni and/or to Yesh Atid, led by Yair Lapid. If Kadima manages to pass the qualifying electoral threshold, its leader Shaul Mofaz, too, will most likely receive a generous offer.

It stands to reason that none of them will reject the deal proposed by Netanyahu. In the Labor party leadership, they have already started dividing the spoils. Lapid, for his part, rushed to explain that he had not entered politics to sit in the opposition. As to Mofaz, not too long ago, he demonstrated that he found no fault in sitting around the government table between Netanyahu and leader of the Yisrael Beitenu party Avigdor Liberman.

Tzipi Livni, too, would not rule out the possibility of joining a government led by Netanyahu. However — and here’s the big difference — she is considered to be of another league and much more is thus expected of her.

It turns out that many in the Israeli left, as well as quite a few who identify themselves as politically centrist, are critical of Livni. They disapprove of her failure to rule out collaboration with someone whom she herself branded in her election campaign as no less than a “disaster.” They expect the leader of the only one of the four centrist parties that is waving the banner of peace at the top of its political agenda to commit herself at this stage to having nothing to do with the leading candidate in the race for the premiership.

Alas, such expectations testify to a lack of political wisdom at best or to outright dishonesty at worst.

Second, a priori refusal to hold negotiations with Netanyahu on account of his political positions would make it possible for Likud Beitenu to charge that Livni’s rejectionist attitude left it no choice but to set up a coalition with the far-right parties.

However, there is an even weightier consideration to be taken into account in this context: The coalition negotiations will give Livni a unique opportunity to remove the mask from Netanyahu’s face — the way Barak claims to have done to then-Palestinian Authority Chairman Yasser Arafat at the 2000 Middle East Peace Summit at Camp David. Representing Israel at the time in his capacity as prime minister, Barak coined the phrase “there is no partner” to negotiations, which has been haunting the Israeli left ever since.

Similarly, Livni can and should expose what is really hiding behind Netanyahu’s peace speeches and his repeated calls on Palestinian President Mahmoud Abbas “to return to the negotiating table.” All that Livni will have to do is to present Netanyahu with the text of the famous address he delivered in June 2009 at Bar-Ilan University.

She should request him then to include this text in the basic policy guidelines of the new government and to require all coalition members, without exception, to commit themselves in writing to support this fundamental clause.

It is not hard to guess how leading Knesset members like Danny Danon, Zeev Elkin, Moshe Feiglin, Tzipi Hotovely and David Rotem are going to react when confronted with the following passage from Netanyahu’s speech: “In my vision of peace, in this small land of ours, two peoples live freely, side by side, in amity and mutual respect. Each will have its own flag, its own national anthem, its own government. Neither will threaten the security or survival of the other.” One can only imagine what Minister of Education Gideon Sa’ar and Likud Knesset Member Miri Regev are going to say when asked to sign the declaration made by Netanyahu at Bar-Ilan University three and a half years ago, which reads as follows: “If we receive this guarantee regarding demilitarization and Israel's security needs, and if the Palestinians recognize Israel as the state of the Jewish people, then we will be ready in a future peace agreement to reach a solution where a demilitarized Palestinian state exists alongside the Jewish state.”

There is no need for too much speculation. The likely response of the majority of the Likud Beitenu members may be surmised from the statements made with reference to the issue by Minister Ze'ev Binyamin Begin, a member of the forum of eight ministers, who was pushed to an unrealistic spot at the bottom of the Likud Beitenu electoral list due to his supposedly “moderate” views. Last March, at a closed meeting with students at the Hebrew University of Jerusalem, Benny Begin said, commenting on Netanyahu’s Bar-Ilan speech: “I do not accept this notion [of a two-state solution]. It is no mere chance that no resolution to this effect has been passed in the Israeli government of which I am a member.” Begin further said at that meeting, which was covertly recorded: “The issue has never been raised for discussion in the government, and it will never be submitted for debate. This is by no means the government's position.”

Begin went on to state that a sovereign and demilitarized Arab state as requested by Netanyahu in his Bar-Ilan speech was “an oxymoron,” noting that the Palestinians would never agree to a limitation of this kind.

Benny Begin, who has made a name for himself as an honest politician, told the Hebrew University students that Netanyahu’s statements in his Bar-Ilan speech “were intended for foreign ears alone.”

In fact, the American administration and the European leaders welcomed the speech, describing it as “an important step” toward the establishment of a Palestinian state. At the same time, the speech served as an “iron dome” for the Labor party, whenever it was criticized by the left over its alliance with the Likud and the parties further to its right.

Furthermore, the professed willingness voiced by Netanyahu in his Bar-Ilan speech to lend a hand to the establishment of a Palestinian state, which presented him as a peace advocate, spearheaded the propaganda campaign against Palestinian Authority Chairman Mahmoud Abbas, who was shown accordingly as “a peace rejectionist.”

Yachimovich and Lapid are riding the wave of “there is no Palestinian partner” coined by Barak, that has been conveniently serving Netanyahu’s ends. As for Livni, she should reach out to Netanyahu and once and for all tear off the mask hiding his true face.

Akiva Eldar is a contributing writer for Al-Monitor’s Israel Pulse. He was formerly a senior columnist and editorial writer for Ha'aretz and also served as the Hebrew daily’s US bureau chief and diplomatic correspondent. His most recent book ( with Idith Zertal), Lords of the Land, on the Jewish settlements, was on the best-seller list in Israel and has been translated into English, German and Arabic. In 2006, the Financial Times named him among the world’s most influential commentators.