Iranian media reported on the trilateral meeting between the presidents of Iran, Russia and Turkey in Sochi as a step toward a new Middle East. 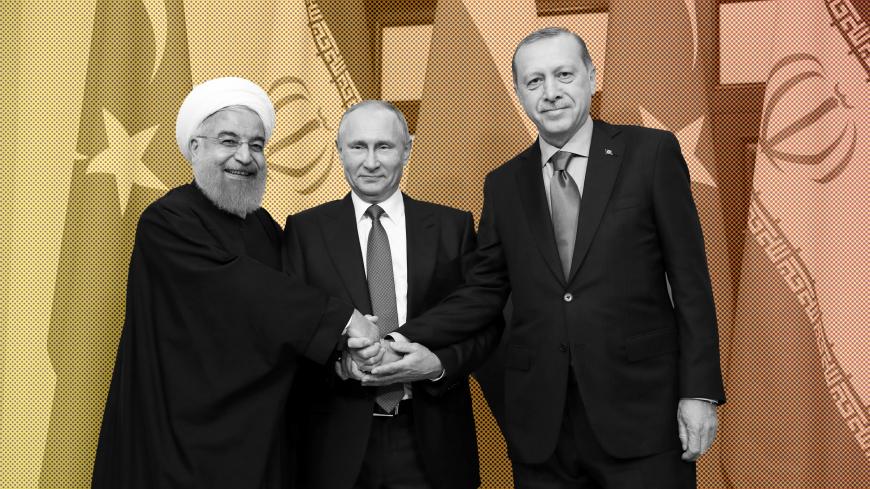 On Nov. 22, Iranian President Hassan Rouhani traveled to the Russian Black Sea city of Sochi for a trilateral meeting with his Russian and Turkish counterparts. The summit has been described as highly important for the future of Syria, particularly given the three leaders’ call for a Syrian congress to be formed to discuss the future of the war-torn country.

Meanwhile, Iranian parliamentary Speaker Ali Larijani, who is on a trip to Turkey, said that the Sochi summit is a "turning point" in the region.

Larijani stated Nov. 21, “Iran, Turkey and Russia [have formed] a good and complementary group that if they pursue [this process], [they] can play a more important role in Asia, because the performance of these countries in Syria and the work they did in Syria calmed down the atmosphere and almost destroyed the terrorists.”

He added, “Now it is time to establish stability in the region, and the Sochi summit is being held with the aim of stabilizing the situation in Syria and is very important.”

Meanwhile, Iranian newspapers and news sites described the Sochi meeting as a process leading to a “new Middle East.”

In this vein, Reformist Shargh daily wrote Nov. 22, “This summit indicates that the unity among Iran, Russia and Turkey is more prominent than in the past and these countries are engaged in a joint road map that is designed for Syria, and has been pursued in various summits. … Today, Iran, Turkey and Russia are drawing a road map for the new Middle East.”

Moreover, Bahar, a Reformist daily, argued Nov. 22, “It seems that the results of all seven rounds of negotiation and summits in Astana will be finalized in the meeting of Turkey, Russia and Iran’s heads of government in Sochi. In reality, seemingly the three countries are planning to reach important final agreements on the Syrian crisis in this meeting.”

Quoting a source, Bahar daily added, “Two goals are pursued in the trilateral meeting: First, Tehran, Ankara and Moscow are planning … to state the importance of the achieved agreements and trilateral cooperation between them on Syria. Second, they are attempting to reach a final agreement based on what they have negotiated in Astana, and then design a joint plan for the Geneva negotiations that is agreed on by all sides.”

In addition, Reformist Etemad newspaper highlighted the importance of the presence of the Turkish president whose main demand has been the removal of Syrian President Bashar al-Assad since the beginning of the crisis in Syria.

“[Recep Tayyip] Erdogan will meet today with Rouhani and [Vladimir] Putin, and Iran and Russia’s leaders will pressure him to [accept] a political solution [for Syria] and the presence of Bashar al-Assad [in the future of Syria]. But Saudi Arabia … is supposed to state its view through choosing the chairman of the Syrian opposition,” reported Etemad daily Nov. 22.

Mentioning the Sochi talks, Hossein Sheikh al-Islam, an adviser to Iran’s foreign minister, told Shargh daily, “The developments in Syria are happening [with a view] toward [reaching] a political solution. Following the military victory in Syria against Daesh [Islamic State] and after Daesh forces and terrorism’s defeat, their last organized base in the region collapsed. Other opposition to Bashar al-Assad is present in Idlib, and now Syria has stepped toward the political dialogue more than before, and this victory has turned into a political solution.”

Meanwhile, conservative Khorasan daily emphasized the presence of the chief of staff of the Iranian Armed Forces in Russia, writing Nov. 22, “While Daesh has no official presence in any Syrian cities, and prior to the meeting of Iran, Turkey and Russia’s leaders, the highest ranking military officials of the three countries … reached an agreement over increasing the cooperation for destroying the remaining terrorists in Syria’s post-Daesh [era]. … Enhancing the transition process and solving the crisis in Syria was one of the issues discussed.” Of note, Iranian Chief of Staff Maj. Gen. Mohammad Bagheri left Tehran for Russia on Nov. 20.