Iranian Reformist media outlets are pointing the finger at former President Mahmoud Ahmadinejad for the high death toll from the recent earthquake in the western part of the country. 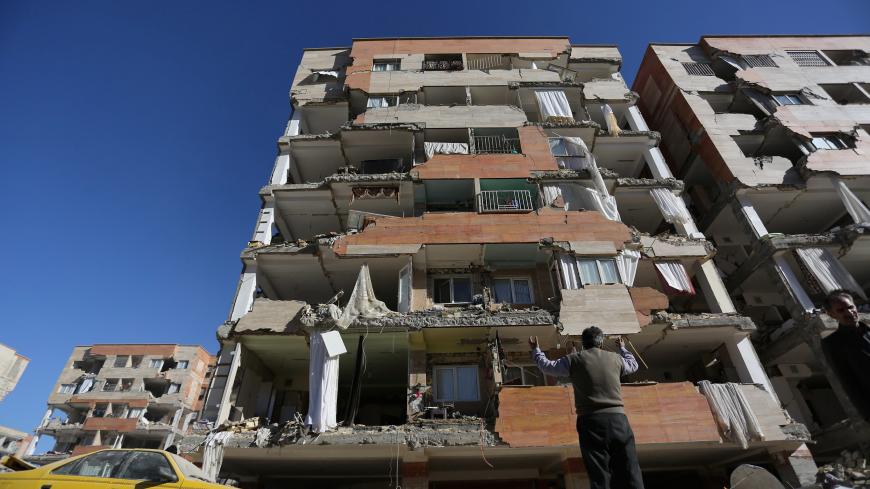 A man reacts as he looks at a damaged building following an earthquake in Sarpol-e Zahab in Kermanshah province, Iran, Nov. 13, 2017. - REUTERS/Tasnim News Agency

On Nov. 11, a 7.3 magnitude earthquake rattled the border region between Iran and Iraq, causing extensive damage and the death of at least 530 people in the western part of Iran. The highest casualties occurred in the town of Sarpol-e Zahab, situated in Iran’s Kermanshah province.

The population of Kermanshah and the area that was affected by the powerful earthquake is mostly Kurdish. This captured the attention of Iranian media and newspapers, leading a number of them to take the step of writing their headlines on their front pages in Sorani to demonstrate their empathy and sympathy.

Of note, almost 6 million Kurds live in Iran, constituting both Shiites and Sunnis.

On Nov. 14, President Hassan Rouhani traveled to Kermanshah to oversee the situation himself. Upon his arrival, Rouhani vowed that his government would solve all the problems that arose following the earthquake.

While a lot of houses have been fully destroyed and the weather is becoming cold, the need for tents and other essential aid, including mineral water, is essential. This has prompted a number of media outlets to slam the government for its slow action in providing initial relief to the people in Kermanshah province who are now homeless.

Iranian security forces, including the regular army, and the Islamic Revolutionary Guard Corps are on the ground helping those affected by the earthquake.

Famous athletes and artists have separately begun campaigns to collect money and aid for the people of Kermanshah. Ali Daei, a former captain of Iran’s national soccer team, is among those well-known figures who have initiated campaigns.

Meanwhile, it has been reported that a large number of apartments that were destroyed and damaged in the earthquake were built under former hard-line President Mahmoud Ahmadinejad (2005-2013), which has been confirmed by First Vice President Eshaq Jahangiri.

During his presidency, Ahmadinejad initiated a major plan to provide low-cost housing across the country — an initiative that has long faced many criticisms for the quality of construction and other issues.

After taking office in 2013, Rouhani, who was among the critics of the Mehr Housing Scheme, said that despite his opposition to the plan, he was committed to completing the homes that had been promised. Minister of Roads and Urban Development Abbas Akhoundi also attacked the scheme, calling it an “absurd plan” with negative effects on Iran’s economy and an undeniable element behind the prior surge in house price.

Now, while conservative newspapers and outlets have kept their silence regarding the Mehr Housing Scheme and are complaining about the government’s lack of speed in aiding people, Reformist newspapers are pointing the finger at Ahmadinejad as the man who caused the many deaths in Kermanshah.

In this vein, Reformist newspaper Hamdeli wrote Nov. 14, “The Mehr Housing [Scheme] is precisely the example of mismanagement of an administration that sought to announce at any price that it was in favor of poor people.” The report added, “Mahmoud Ahmadinejad and all the people involved in building the Mehr Housing [units] and all the contractors who have been part of these projects must be put on trial.”

In addition, under the headline “The nightmare of Mehr Housing,” Reformist daily Shargh argued Nov. 14 that in the wake of the earthquake, people who live in Mehr Housing apartments in other parts of the province have left their homes as they have become worried after witnessing the ruins of Mehr Housing in Sarpol-e Zahab.

Deputy Minister of Roads and Urban Development Hamed Mazaherian told Shargh Nov. 14 that this is only the beginning of the problems of the Mehr Housing Scheme and that other social, cultural and economic dimensions of these problems will surface in the following years.