Al-Monitor travels to the towns of western Iran, where a 7.3 magnitude earthquake has left at least 452 dead and many more homeless. 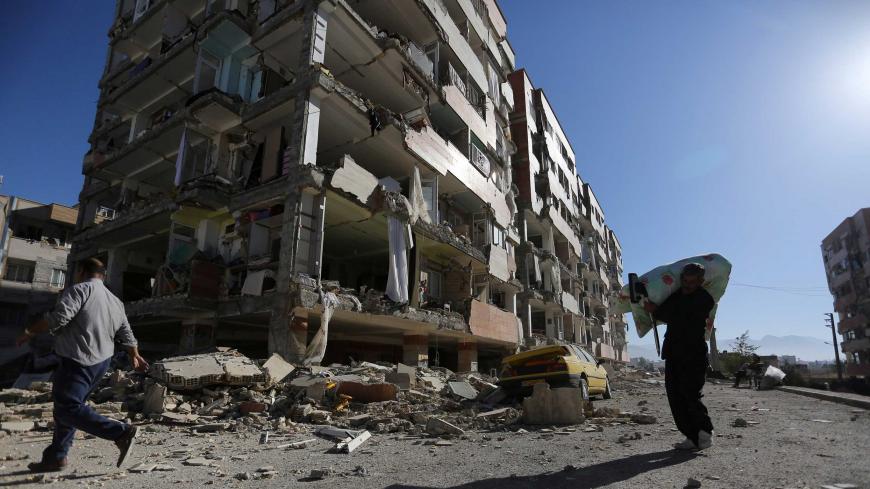 KERMANSHAH PROVINCE, Iran — Across Iran’s western Kermanshah province, tents can be seen in parks and along roadsides. Some tents are for people who lost their homes in the Nov. 12 earthquake, and other tents are for those who fear that another earthquake might strike. The city of Sarpol-e Zahab was the most affected by the powerful, 7.3 magnitude quake that has killed at least 452 people, but other cities and towns, such as Eslamabad-e Gharb and Qasr-e Shireen, were also hit hard.

Upon entering Eslamabad-e Gharb, the first thing one sees are white tents in the main park. While the devastation in this city, which has a population of around 80,000, is less than elsewhere in the province, the facade of its main hospital and some buildings in the western part of the city were badly damaged. “This building was only finished two years ago,” said a resident of a damaged apartment building. “It was God’s mercy that none of the 15 families living here were killed.”

His neighbor, Mr. Mohammadi, was celebrating his daughter’s birthday when the quake hit. Traces of the party could be seen along the apartment’s cracked walls, where balloons and decorations still hung. “We were in the living room when everything started to shake," he said. "We felt as if the building was falling on our heads. It was just the kids everyone was concerned about.”

Some residents of Eslamabad-e Gharb complained that they weren't treated as a priority. “The government is focused on Sarpol-e Zahab, and they forgot about those in other cities," said a man who had taken refuge in the city park. “There are thousands of people in the streets. We know the tragedy in the other city is big, but we too need help.” A man with a bandaged arm smiled at these comments, saying, “Just go there and you yourself would forget about here. The ground has turned upside down there.”

The road to Sarpol-e Zahab runs alongside high cliffs. When the quake struck, rocks fell from the cliffs and onto the main roads, damaging them. Upon approaching the stricken city, the scene was of tents and people in shock. The Iranian Red Crescent provided some of the tents, but other tents were just regular ones used for camping. Closer to the outskirts of town, the scene became clearer: The city had become a giant refugee camp.

“We still need more tents, more food, more water, blankets,” said a man whose apartment was destroyed by the quake. “I have nothing to return to. My family had a few seconds to leave. It was a miracle that we made it, but we are without a home anymore. I would rather have died than to see myself and my family in a tent.”

In the center of the city, the scenes of destruction were more obvious. Entire neighborhoods had been wiped out. Some people wandered among the rubble, searching for their belongings, mostly valuable items like jewelry, electronics and rugs. While accompanying a family to their home, Al-Monitor heard a woman shouting, “There might be someone alive here!” Soldiers and members of the Red Crescent rushed to the scene: a three-story building turned to rubble. A rescue dog was brought to the scene to check for signs of life, while others searched among the rubble for documents that might provide residents' phone numbers or identification. Scattered certificates and papers revealed that a 25-year-old woman named Fatemeh lived there, but no phone number was found.

On the ground nearby was a drawing of an Iranian flag with a note in Persian, “How beautiful is our Iran?” Other scattered items attracted Al-Monitor’s attention: a book written by slain Syrian cleric Mohamed Ramadan al-Bouti; a magazine with a picture of Sayyid Qutb, a prominent Egyptian Muslim Brotherhood figure who was executed in the 1960s; an excerpt from an Arabic text by late Lebanese poet and author Mikhail Naimy. The search continued.

At the scene, Al-Monitor met Mohammad Zaeri of the Iranian Red Crescent. He explained that his organization went on alert during the first hours of the disaster. “We mobilized all our teams in the region and from far away," he said. "In a few hours, we were ready and doing our duty. Still, it’s a big operation. The number of affected people is big, but we are able cope with the situation with the help of the army, the [Islamic Revolutionary Guard Corps] and other governmental institutions.”

The Red Crescent and the National Emergency Center, with the help of the army, set up a field hospital by the city’s main hospital, which was heavily damaged by the earthquake. Dr. Motamedi, the health officer of Kermanshah province, told Al-Monitor that the field hospital was ready in less than six hours and had received more than 6,000 patients in 48 hours. “People are in need of medical help," he said. "This helped keep the medical situation under control. We are distributing thousands of medications and attending to people with different situations, from nervous breakdowns to surgeries.”

Ordinary Iranians also rushed to the quake-hit areas to help their fellow citizens. Several initiatives on social media succeeded in gathering money to help those affected. In an Instagram post, famous Iranian actress Niki Karimi called on people to donate, as did social media celebrity "Mr. Taster," who managed to raise thousands of dollars for earthquake relief.

The final toll of the quake is not yet clear. But given the extent of destruction and the power of the earthquake, it’s clear that Iran narrowly avoided a disaster that could have echoed the 2003 earthquake in Bam that claimed up to 30,000 lives.