While ordinary Iranians’ response to the deadly Nov. 12 earthquake has been a show of national solidarity, it also displayed mistrust in authorities. 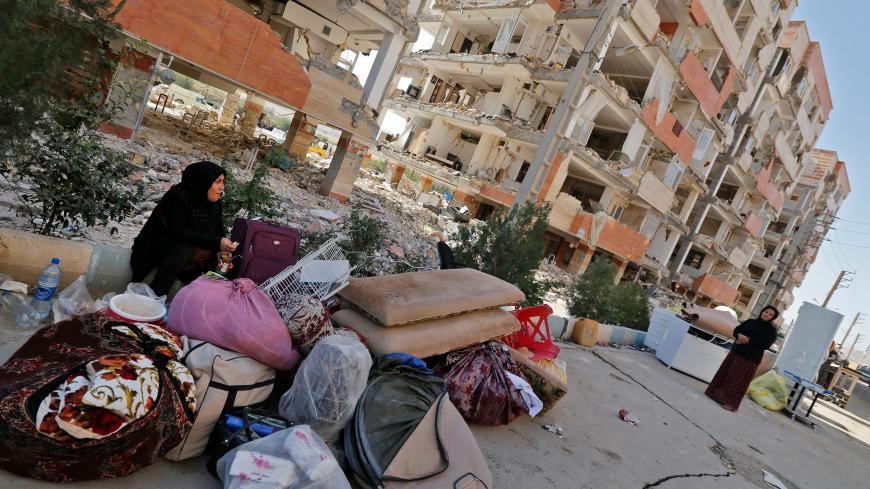 Iranians sit outside damaged homes after salvaging furniture and household appliances in the town of Sarpol-e Zahab, Iran, Nov. 15, 2017.

A powerful 7.3 magnitude earthquake struck an area straddling the Iran-Iraq border on Nov. 12. Iran’s western province of Kermanshah was the hardest hit with over 400 fatalities. Sympathies immediately began pouring in from across Iran, with many taking direct measures to help the victims. Many of these efforts, however, only created more difficulties in the delivery of aid to quake-stricken regions.

Iran’s social media networks were abuzz from the initial hours after the earthquake, with people asking how they could help. Very few suggested government-affiliated organizations, such as the Iranian Red Crescent Society, which, at times of disaster, is the largest entity involved in providing relief efforts in the country. Instead, most Iranians seemed interested in finding nongovernmental organizations that could deliver their aid and donations to victims.

Iran’s celebrities responded to this call, assuring people that they knew just how to do this. Former soccer player and national team coach Ali Daei was one such example. In an Instagram post Nov. 13, Daei — who also used to play for Germany’s Bayern Munich — asked the public to send their nonmonetary donations to him so he could make sure it was delivered to the victims. Later that same day, Daei posted a bank account number and said that because public support had been massive, he would also accept monetary donations.

Sadegh Zibakalam, a professor of political science at Tehran University, also took a similar approach. On Nov. 15, Zibakalam — who has a large presence in Iranian media and on social networks — posted an account number on Instagram and said he knew some reliable people in Kermanshah who could make sure the aid was delivered to the victims.

The donations transferred to these two prominent figures were beyond what most probably imagined. In a Facebook post Nov. 21, Zibakalam said he had collected 23 billion rials ($652,850) in donations up until then. He also added that the figure was rising and noted that because the donations had exceeded his expectations, he would personally travel to Kermanshah to assess the situation at hand. Daei also posted a video message on Instagram Nov. 21 and said, “[To this point], 15 trucks and trailers carrying nonmonetary aid have been dispatched to the victims. Also, 62.8 billion rials [$1.78 million] have been donated.”

Yet regardless of the massive public support, there were still many difficulties in providing relief efforts for the victims. The huge number of people that had opted to personally help the victims resulted in the aid not always being distributed in a logical, just and coordinated manner.

Fahime Hassanmiri, a journalist covering social affairs who traveled to Kermanshah to report on the situation firsthand, told Al-Monitor, “In some instances, you could see a lack of coordination in assisting the victims. Those villages that received more media coverage also got much more aid than needed, while there were shortages of tents and blankets in other villages. I also had a chance to see the Red Crescent in action and saw their management and organization in helping the victims. However, the persistence of [ordinary] people in personally sending donations through trusted figures or those they knew in the region not only created difficulties in aid distribution but also caused massive traffic jams on the roads leading to these villages, and so what normally was a half-hour drive took several hours because of the traffic.”

On Nov. 17, a few days after the earthquake struck, Kermanshah’s deputy police chief urged the public to refrain from driving to the quake-hit regions with their own cars since it would only lead to heavy traffic and create problems in the delivery of aid.

Meanwhile, Iran’s Red Crescent Society urged people on Twitter to cooperate with the organization so that the aid could be provided to the victims in the best way possible. The Red Crescent Society made the same appeal to domestic and foreign charity organizations Nov. 19. Two days later, the organization tweeted, “Over 2,000 bank accounts have been introduced on Telegram alone for collecting donations for the earthquake victims. How can there be any oversight in such a situation?”

Regardless of all this, there were significant donations made to Iran’s Red Crescent Society as well. In a tweet Nov. 20, the organization announced, “[To this point], the aid has been about 350 billion rials [$9.96 million].”

Private charitable organizations, like Raad Charity, were also very popular with the public when it came to making donations. Elnaz Zargham, the manager of human resources at Raad Charity, told Al-Monitor, “About 3 billion rials [$85,154] have been collected in addition to 22 trucks of essential goods that have already been dispatched to the victims. Also, a portion of the warm clothing donated by people has been stored in a depot to be distributed among the victims in the upcoming cold months when attention [on their plight] moves away from them.”

Why do so many Iranians prefer to make their donations through private organizations or even individuals instead of government-affiliated organizations? Leila Ashouri, a sociology lecturer at Tehran University, told Al-Monitor, “News stories of billion toman embezzlements in some government organizations have worried many people, and so they prefer to transfer their donations to the victims via figures they trust. At the same time, some individuals and celebrities are using the current situation to create a more favorable image and position for themselves in society. Of course, there are some like Daei and Zibakalam who do not need such attention. But we have seen others who are using the situation to make their mark by taking pictures and sharing them on social media.”

With the severity of the damage caused by the recent earthquake, which completely destroyed some villages, what seems to be of urgent need for the victims are perhaps temporary shelters followed by the rebuilding of their homes. This is something that government organizations can take care of better than can individual figures or celebrities.