In addition to causing extensive damage and loss of life, the recent flooding in Iran has also made it more difficult for some Iranians to trust government organizations when it comes to aid and relief efforts. 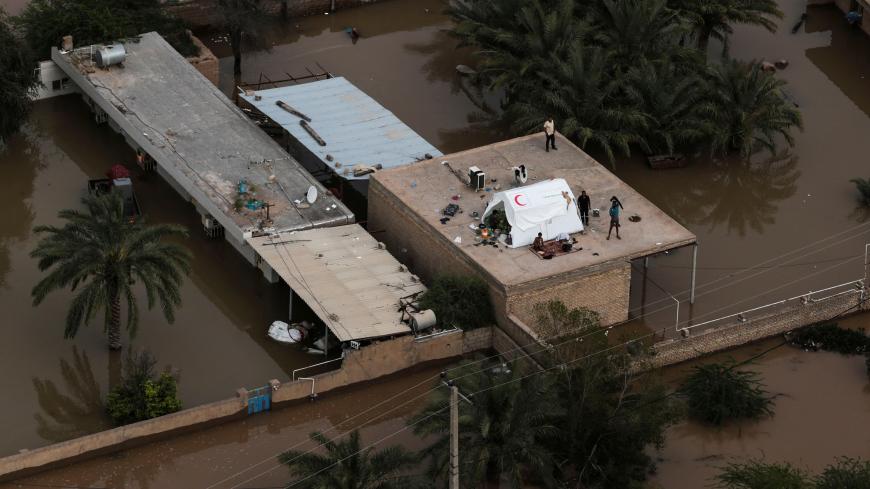 This year, the Nowruz holidays in Iran were accompanied by unpleasant events. Heavy rainfall in the final days of March caused massive flooding in different regions across Iran, especially in the northern province of Golestan, the western province of Lorestan, the southern province of Khuzestan and some regions in the east.

The Iranian Red Crescent Society soon announced a bank account where Iranians could make donations, and also offered to collect nonmonetary contributions. Yet many Iranians chose to go through channels not associated with the authorities to make donations. This approach, which has quickly become a trend in Iran, was not only seen during the recent flooding but also in the aftermath of the deadly earthquake that hit western Iran in November 2017.

At that time, some Iranian celebrities announced their own personal accounts and invited people to make their donations to these accounts to ensure their delivery to the real victims of the quake. This approach, which had brought a certain level of credibility and public praise for some figures in the world of sports and the arts, especially during the 2017 quake, prompted many similar initiatives during Iran’s recent flooding.

While the celebrities themselves provided no financial aid to the victims of these disasters, they relied on their reputation to collect the public’s donations. However, most of these individuals also did not provide transparent reports of how these donations were spent. This is why many elites in media and the cultural arena have asked people to only give their donations to expert organizations and refrain from transferring money to personalities and celebrities.

As such, a group of mainly Reformist political and cultural activists issued a statement April 9 that said, “This is the time to show empathy and solidarity to help our flood-stricken countrymen.” The statement added, “Now is the time to demonstrate national solidarity and provide relief, rebuild and reduce the pain of our fellow Iranians. Thus, it is necessary that we line up all our society’s social, civil and institutional resources for this purpose.”

Meanwhile, a few days earlier, on April 6, Ali Asghar Peyvandi, the head of the Iranian Red Crescent Society, announced that the public had donated about 400 billion rials (about $9.5 million) to the organization for aid and relief efforts, adding that given the extent of damage caused by the floods, he expected this amount to go much higher.

However, some Iranians still prefer to do things their own way. A quick search on the more popular social media networks among the Iranian public, such as Telegram and Instagram, showed that rumors of government organizations as well as organizations associated with the authorities not being trustworthy for receiving public donations was still very hot.

Masoud, a fruit store owner in Tehran, was one such distrustful individual. “I don’t trust any of these government organizations," he told Al-Monitor. "We have heard so much news about thefts and embezzlements that we have to be stupid to give our money to these organizations again. You give money and the next day, someone like [Mahmoud Reza] Khavari [former chairman of Bank Melli of Iran who fled to Canada after embezzling about $2.6 billion] shows up and opens a restaurant or a casino in Canada with the money [he stole] from these simple people.”

One problem with people pursuing their own approach when it comes to relief operations is the lack of proper expense reports. Also, celebrities lack the needed expertise in providing relief efforts. This has led to aid not reaching the victims in an expert manner, not to mention that the presence of these individuals on the scenes of a crisis can create difficulties in the relief efforts of the Iranian Red Crescent Society.

Alireza Beiranvand, goalkeeper of Iran’s national soccer team and the Persepolis Club, invited people on Instagram to bring their non-monetary donations to him so he could personally deliver them to the flood-stricken people of his home province of Lorestan. Beiranvand also vowed to auction off the gloves with which he caught superstar Cristiano Ronaldo’s penalty kick at the 2018 World Cup to help the flood victims. Soon after, videos appeared of several sport sheds filled with massive public donations, all based on Beiranvand’s name and reputation. During aid delivery, however, this goalkeeper was only present in the route between Tehran to Lorestan province, after which he had to leave to join his club’s training camp. As a result, the responsibility of distributing the public donations was handed over to some unknown and nonexpert individuals, such as managers at Persepolis, who do not have much expertise in this area.

One reason why celebrities have shown interest in aiding natural disaster victims is the public credibility they gain through such measures. Sociologist Maryam Siami-Namin told Al-Monitor, “Obtaining social status and dignity is one of the needs that individuals are naturally seeking to acquire, and the reason for this is how public opinion welcomes such acts. For example, [former soccer star] Ali Daei’s presence and relief efforts for the victims of the [2017] Kermanshah quake and the measures he took to build housing for these victims increased his social status much more than before.”

But this desire for fame and attention also creates some problems in providing relief efforts. Fahimeh Hassan Miri, a journalist covering social affairs, told Al-Monitor, “The presence and assistance of nonexpert forces can even add to the difficulties since sometimes the balance of aid is disrupted and, for example, one village receives more than its need of water donations, while another village receives more bread.”

Hassan Miri, who was in the western province of Kermanshah in the aftermath of the 2017 quake and provided on-site reports, added, “Nonexpert forces generally have less patience and tolerance. Most of them are after taking pictures and sharing them on social media. Therefore, their output is naturally not too significant.”

Yet it seems an important gap has been created within Iranian society — one that has the potential to impact more extensive issues. With the expansion of unofficial and unprofessional media outlets — many of which promote fake news — the general public is likely to believe stories that are not completely true.

Meanwhile, the inefficiencies of government organizations should not be forgotten, with billions of dollars of embezzlements constituting a significant portion of the Iranian public’s mistrust of the political establishment. At the same time, the restrictions placed by this same establishment on the flow of information have prompted the rapid rise of unofficial news channels that are only concerned with getting more clicks. As a result, a key part of Iranian society has become less trustful of elites. This, in turn, has opened the way for opportunists to maneuver. As such, it appears that these gaps can in the future be accompanied with more extensive repercussions.