Kayhan, the mouthpiece of Iran’s hard-liners, has been suspended for two days after a headline suggesting that Yemen’s Houthi movement will attack Dubai. 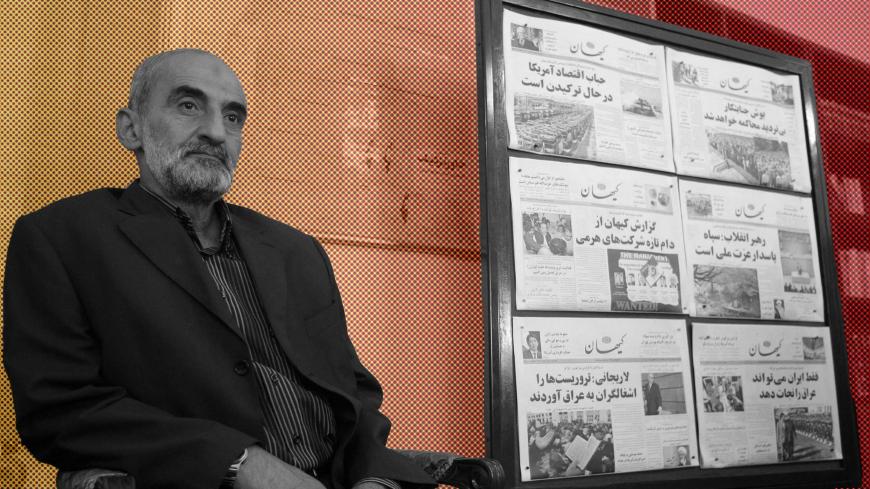 Hossein Shariatmadari, the editor-in-chief of the hard-line Kayhan newspaper, sits next to issues of the newspaper at his office in Tehran, Iran, Sept. 16, 2007. - BEHROUZ MEHRI/AFP/Getty Images

The hard-line Kayhan daily was ordered suspended for two days Nov. 8 after receiving a warning from the Ministry of Culture and Islamic Guidance about a controversial headline.

The headline, “Ansar-Allah’s missile fires at Riyadh, the next target, Dubai,” prompted many in Iran to slam the influential newspaper. Kayhan had gone against the position of both Iranian political officials as well as the Islamic Revolutionary Guard Corps, whose commander denied Saudi and US allegations about Tehran’s role in the Nov. 4 Yemeni missile strike on Riyadh’s airport.

The editor-in-chief of Kayhan is appointed by Iranian Supreme Leader Ayatollah Ali Khamenei. Of note, Jomuri-e Eslami newspaper, whose editor is also appointed by the supreme leader, criticized Kayhan for its headline. Thus, the remarkable step of its suspension by the judiciary indicates that the political establishment wants to signal that Kayhan is not the spokesman of the Islamic Republic. The Ministry of Culture and Islamic Guidance is controlled by moderate President Hassan Rouhani's administration.

In other news, a former senior Iranian diplomat has revealed that hard-liners at one point sought to put Mohammad Javad Zarif, who has served as Iran’s foreign minister since 2013, on trial. It is unclear precisely when this occurred, but Sadegh Kharrazi, a former ambassador to the United Nations and France, was speaking about the Reformist era (1997-2005) when he made the remarks about Zarif, indicating that such pressure may have arisen after the collapse of Iran’s nuclear negotiations with Europe in 2005, which coincided with the election of hard-line President Mahmoud Ahmadinejad.

Speaking at a conference in Iran focused on the country’s relationship with the United States, Kharrazi said Nov. 7, “There was no period like that of the Reformist era in which we made efforts in foreign policy, but [hard-liners] went so far that they sought to put the best people of this country, including Dr. Zarif, on trial.”

Speaking about the nuclear deal, Kharrazi said the path that resulted in the Joint Comprehensive Plan of Action (JCPOA) would have been pursued regardless of who won the 2013 presidential elections in Iran. The vote brought Rouhani to power.

“[The negotiations leading to the JCPOA] had begun via Oman before Rouhani’s administration [took office]. Mr. [Ali Akbar] Salehi, [then foreign minister and current head of the Atomic Energy Organization of Iran] began these talks.”

However, Kharrazi said that the way the talks were arranged and the performance of Rouhani ultimately paved the way for the nuclear deal, which was signed in 2015.

Noting the hard-liners’ current attacks against Zarif, Kharrazi said, “The problem of some figures [within Iran] was that Zarif [was the one who achieved the nuclear deal], and unlike his predecessors who attended the talks with general directors [of P5+1 countries], raised the talks to the ministerial level.”

The former Iranian diplomat added that the Rouhani administration has enjoyed a good working relationship with the head of the Quds Force, Qasem Soleimani.

Commenting on ties with Washington under the previous US administration, Kharrazi added, “There was this assumption that [based on] messages that were sent by [President Barack] Obama, [US] policy toward Iran would change, but in the end, this didn’t happen and Obama’s tone was different from America’s actions. … On the one hand, [they] spoke of peaceful coexistence, and on the other hand, they pursued the idea of overthrowing the Islamic Republic of Iran.”

Speaking about the current US administration, Kharrazi said, “Today, we should look at Iran's foreign policy issues, and especially Iran-US relations, realistically. And it's better for us to speak about reality, not about our own beliefs." He continued, “Since the day [the Islamic] revolution was triggered in Iran, our relationship with the United States turned into a special [issue] and was not based on international custom and its rules.”