In a lecture series reminiscent of Gamal Abdel Nasser's socialist indoctrination program, the Egyptian government is forcing judges and other members of the judiciary to undergo training in "strategic and national security studies." 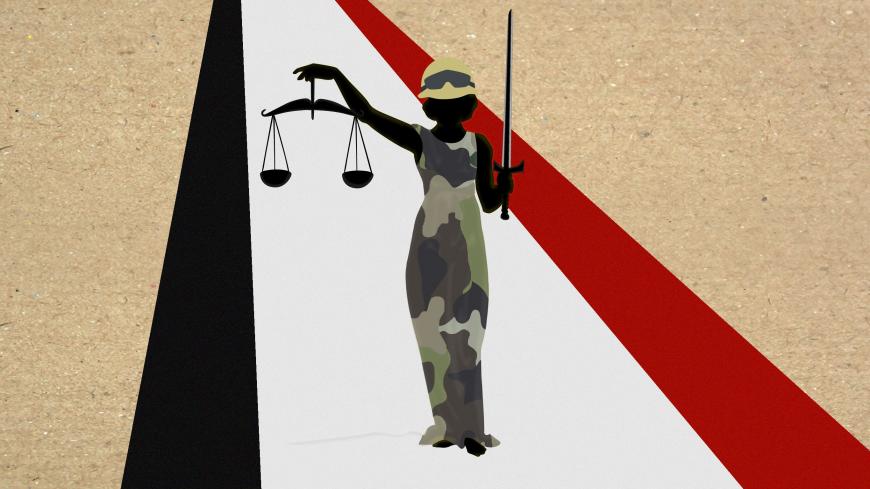 CAIRO — The Egyptian regime has been trying to enroll judges and members of judicial authorities and committees in training sessions in strategic and national security studies at the Nasser Higher Military Academy, a judicial source that attended one of the sessions told Al-Monitor. The sessions, which started three months ago, are ongoing and will target all judicial committees and authorities in Egypt.

The Nasser Higher Military Academy was established by presidential decree in 1965. It was set up as a training program for senior civil servants across various state sectors to prepare them for leading positions. Many journalists and ministry officials as well as heads of some key institutions were required to complete the training to occupy such positions.

A judge who is a member of an Egyptian judiciary committee told Al-Monitor that he had been ordered to take the training session in strategic and national security studies at the Nasser Higher Military Academy in Dokki district in Giza. He noted that attendance has become mandatory for all members of the judicial authorities.

The source, who preferred to remain anonymous for safety reasons, explained that the two-week session entails six training hours per day, saying that principles and strategies of national security are taught in addition to the importance of information security.

The source added that the sessions are intended to “unite the ranks of judges and introduce them to the principles of national security and the importance of confidentiality and privacy.”

The source said the trainees were warned about the dangers of critical coverage of their work by journalists as well as their monitoring by social media users. The judges were specifically warned not to talk to media correspondents, be they Egyptian or foreign, and to restrict their communications to official spokespeople of the parties concerned.

The sessions consist of lectures given by generals in the Egyptian army as well as former diplomats and media and communication instructors. Maj. Gen. Jamal Hawash lectures about crisis management, constitutional Sharia, the role of the law in defending the state and protecting Egypt’s national security from breaches.

Maj. Gen. Mohammad Hosni Azb lectures about information systems and the importance of confidentiality and privacy and withholding negative information about any institution.

A political affairs researcher told Al-Monitor on condition of anonymity that the Egyptian authorities are forcing judges and members of the judicial authorities to attend the lectures. “This reminded people of [President] Gamal Abdel Nasser’s practices in establishing the Socialist Vanguard System as a secret system within the judiciary to lure its members to political and organizational ideas of the Arab Socialist Union,” he said.

The researcher added, “The main roles of the Socialist Vanguard System included recruiting members in different state institutions by instructing them to protect national security and the fledgling revolution from remnants of the feudal system and those who are biased toward the royal system, which was overthrown by the Free Officers Movement in 1952.”

The researcher added that through these sessions, the state is now seeking to recruit judges rather than force them to join a covert organization.

These sessions were not the Egyptian authorities’ only attempt to control judges. On April 28, President Abdel Fattah al-Sisi issued a law amending the way heads of judicial committees are appointed, giving the security authorities the power to vet judicial appointments and the president to appoint them directly. The State Council voiced its opposition to the law, and three prominent judges appealed it on the grounds that their seniority had been disregarded.

Other such efforts have included salary raises. In 2015, former Minister of Justice Ahmed al-Zend succeeded in paying the judicial staff's overdue medical allowances, estimated at 3,000 Egyptian pounds ($169) for each judge and prosecutor. On June 15, the Supreme Judicial Council decided to increase the salaries of prosecutors and judges of various ranks by 30%.