The Egyptian government has promised to investigate the conditions at the Tora Maximum Security Prison following complaints by prisoners’ families and nongovernmental organizations. 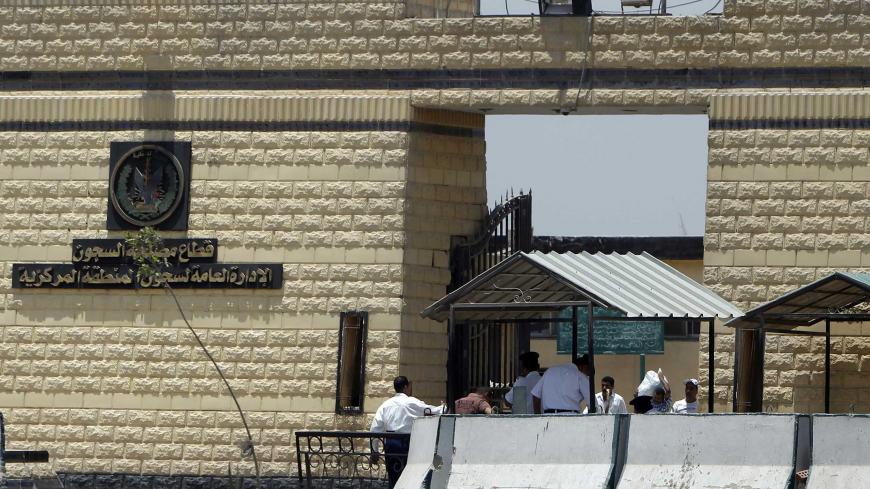 Policemen and other people walk in front of the main gate of Tora prison on the outskirts of Cairo, Egypt, June 4, 2012. - REUTERS/Amr Abdallah Dalsh

The decision came after complaints filed by prisoners’ families and nongovernmental organizations called on the government to shut down the prison. The State Commissioners’ Committee, which is part of the country’s administrative courts, approved the complaints and assigned Cairo University to set up a tripartite committee comprising specialized experts in the fields of medicine, engineering and human rights in order to prepare a report about the prison.

The report, the committee said, should include the capability of the prison’s buildings and its annexes, especially the hospital, to receive inmates and whether the prison provides suitable living conditions, including clean water, healthy food and proper health care, for prisoners.

Human rights activists have praised the committee’s decision, saying that it gives hope to the prison’s inmates and highlights the state’s willingness to improve its human rights record.

George Ishaq, an activist and a member of the state-run National Council for Human Rights, said that the decision by the State Commissioners’ Committee is a move in the right direction. “It is a decision that should have been taken a long time ago,” Ishaq told Al-Monitor.

Ishaq noted that in a previous visit to the Tora prison he had observed inappropriate living conditions inside the prison. He highlighted the lack of beds and poor health-care services. “The prison is not a place for humans,” the veteran politician said. “That's why it is sound to take such a decision,” he added.

Egypt has recently been criticized for human rights violations. In September, Human Rights Watch released a report, accusing the Egyptian authorities of systematic torture in prisons.

In a statement, the Egyptian Foreign Ministry lashed out at the Human Rights Watch report, saying that it harmed the reputation of the country and ignored the recent progress made by the government in the field of human rights.

“It is lamentable that an organization claiming to be defending freedoms and human rights in the world adopts an approach that contradicts with such values. The report has lent a deaf ear to all aspects of progress that were achieved in the field of human rights in Egypt in recent years,” Foreign Ministry spokesman Ahmed Abu Zeid said in a statement.

In a September meeting with Mohamed Fayek, the head of the National Council for Human Rights, Egyptian President Abdel Fattah al-Sisi asserted the state’s determination to pursue its efforts for fostering human rights and guaranteeing principal freedoms. This, the president said, comes in line with efforts to combat terrorism and extremism as well as protect the national security from various risks that Egypt and the region are subject to at present.

Fayek presented to Sisi a report that called for improving living conditions for prisoners, upgrading the level of detention centers and paying due attention to the role played by the civil society. The report also included recommendations that go in line with Egypt’s international commitments regarding human rights as well as with the provisions of the Egyptian Constitution. The recommendations included the organization of events aimed at spreading the culture of human rights in addition to continuing the improvement of economic and social conditions for citizens.

The Egyptian parliament also debated this year the introduction of a subject on human rights in the Egyptian curriculum in order to eliminate extremist ideology and raise awareness among young people about their political rights and their national duties.

“It is always used against Egypt because there is a lack of a good mechanism that can address the West or the media and is capable of clarifying the true picture of what is happening in Egypt abroad,” Azer told local media. The parliamentarian suggested the launch of a specialized channel that can clarify the visions of the Egyptian state and all sticking points to the West.