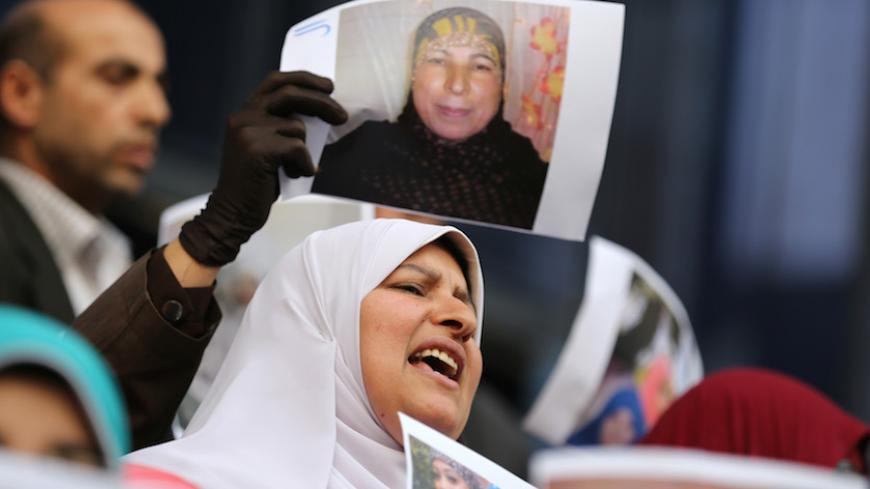 Female relatives of women prisoners shout slogans against the military and the Interior Ministry at an event called "Release Our Girls" during International Women's Day in front of the Press Syndicate in Cairo, March 8, 2016. - REUTERS/Mohamed Abd El Ghany

Mahienour el-Massry is an Egyptian political activist and lawyer who is well-known for employee rights advocacy and for taking part in the January 25 Revolution and June 30, 2013, demonstrations. She is one of the first activists who helped uncover the facts surrounding the killing of Khaled Saeed — the young Egyptian whose death in police custody is widely cited as helping spark the 2011 revolution.

On May 20, 2014, the court upheld a decision to sentence Massry to prison under the protest law for “demonstrating without permit and assaulting security forces,” for protesting during the trial of those accused of killing Saeed on Dec. 2, 2013.

On June 26, 2014, while Massry was in prison, the committee of the Ludovic-Trarieux International Human Rights Prize announced its decision that Massry be awarded the 2014 prize. Massry was released from prison in August of this year. In an interview with Al-Monitor, Massry spoke about her experience in prison.

Al-Monitor:  How much time did you spend in prison?

Massry:  I was arrested for the first time during a demonstration related to Khaled Saeed on Dec. 2, 2013. A six-month jail sentence was confirmed on May 20, 2014, for protesting, assaulting security forces and causing damages. I was arrested for the second time in 2015, during a protest in front of the Ittihadiya Palace, and I was sentenced to 15 months in prison, which I spent in Damanhour prison and Qanater prison, under the law on public assembly.

My parents asked me to flee the country and travel, but I had an ethical quandary about not letting Hasanein pay the price alone. Back then, he was a kid who provides for his family and would not be found innocent, even though he did not participate in the demonstration.

After serving my sentence, my protest and revolutionary activity were focused in Cairo, in order for me to be away a little bit from the Alexandria officers who know me. Yet after participating in the demonstration in front of the Ittihadiya Palace, in protest against confirming the decision to imprison the founders of the April 6 Movement, Ahmed Douma and Mohammed Adel, I was arrested once I set foot in Alexandria.

I was the only political prisoner in Damanhour prison in Alexandria, which prompted the head of the investigations unit to talk about equality between political and criminal prisoners. Then he ordered to move me to a cell for public funds offenders, which I thought was a cell for corrupt businessmen. Yet I found out that it is a cell for female inmates who have no provider.

Al-Monitor:  How were you treated in prison?

Massry:  The way I was treated depended on the mood of the head of the investigations unit. The number of prisoners was lower the first time, while it was higher the second time. The prison cell was small, ranging between 4 to 6 meters [13-20 feet], accommodating 18 female prisoners. Our number reached 30 prisoners sometimes. We had one bathroom, and our stuffs were hung to a nail inside the room. There were no beds in Damanhour prison, unlike the Qanater prison. The design of the political prisoners’ cell, which I entered along with others the second time, was very similar to al-Aqrab prison’s cells. They have no ventilation and water cuts were ongoing.

Al-Monitor:  Did you do anything in response to these inhumane prison conditions?

Massry:  Yes. I filed many complaints against water cuts, but the police commissioner took the issue personally. Yet the reasons behind the ongoing water cuts differed. At times, it was to punish the inmates, and sometimes it was due to financial problems between the Interior Ministry and the water authority. Someone had once explained that the prison administration resorts to this practice because the Damanhour prison is underground and when the water level rises many cells are flooded, which is logical for me. At the end of the day, the complaints were useless.

The medical negligence in Damanhour prison reached critical levels. We were subjected to verbal insults and bad words when asking for a physician by pounding on doors. One day, an inmate gave birth in the prison cell.

Things are stricter at Qanater prison, where I was placed in the political prisoners’ cell, which was known as the ‘Brotherhood’s cell.’ The prison’s administration does not respond to the inmates’ demands. We went on a hunger strike to claim our rights, but they were not met. One day, a fire broke out in the cell and the administration did not assist us, because it was a holiday. We put it out by ourselves and two inmates were burned.

Al-Monitor:  What about the law stipulating your rights, including the right to health?

Al-Monitor:  Did the regime try to suppress you in prison?

Massry:  Things were kind of going fine with me in the Damanhour prison. The entry of books, the gazette and private newspapers such as Al-Masry Al-Youm and Al-Shorouk was permissible.

Once, during a cell inspection, which is one of the worse experiments, the officers came in to conduct a surprise inspection of the beds and all personal stuffs to forcibly take what they already allowed to enter the cell. This time, they discovered my personal notebook that includes my daily observations and is similar to my diary in prison. Fast forward, they called on me and demanded that I refrain from taking notes of facts that include accusations of the prison officers.

Al-Monitor:  How was your relationship with the other female inmates?

Massry:  The relationship evolved over time. They called me ‘the Brotherhood inmate’ in the beginning, as a general classification of any political prisoner. When the presidential elections were held and Abdel Fattah al-Sisi was elected, the prisoners had great hopes in the regime and the president. Their favorite song back then was ‘Tislam al-Ayadi ya Jeish Bladi’ [Blessed are your hands, my country’s army], which became famous after July 3, 2013.

Sisi’s mottos, which have not been implemented, had started to be put to the test and the arbitrary arrests were ongoing under the pretext of preserving [the country’s] security. Yet the security situation was not under control outside [prison].

Al-Monitor:  Did you meet in prison any of those who had been subject to forced disappearance?

Massry:  I met a number of forced disappeared persons in Qanater prison, including Hiba Rifaat, who is accused in the attorney general’s incident [assassination of Attorney General Hisham Barakat] and who remained disappeared until the state security services investigated with her and she was moved to Qanater prison, without her parents’ knowledge. I also met Sarah, who is accused in the bombing of the Embassy of Niger. They were tortured and threatened of being raped and of arresting their first-degree relatives, until they made false confessions.

Al-Monitor:  How do you perceive the situation in the country’s politics now?

Massry:  It is not excellent at present. The military regime has wreaked havoc across the country. Therefore, change has become difficult. There was no such oppression under the Brotherhood rule that I opposed, however.

Al-Monitor:  In case the presidential elections are held in two years, will the revolutionary youth have their own candidate?

Massry:  I can’t anticipate it. A period of two years is too long to predict the stance of the revolution’s youths or satisfaction of the current state with Sisi.