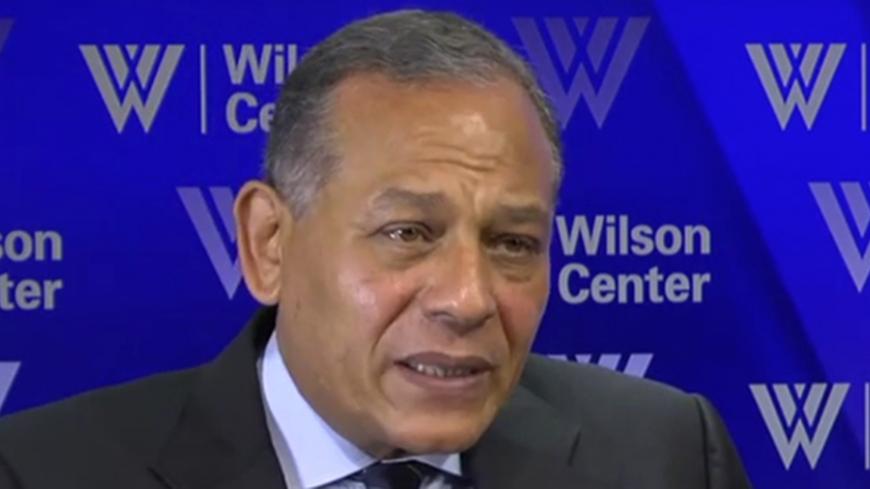 Founder of the Reform and Development Party and nephew of late President Anwar Sadat, Mohamed Anwar Esmat al-Sadat speaks at an event at the Woodrow Wilson Center in Washington, Sept. 13, 2013. - Youtube.com/WoodrowWilsonCenter

CAIRO — There has been increasing media coverage of the so-called forced disappearances in Egypt. Many young Egyptians have fallen victim to arbitrary arrest under the protest law, and some have been detained without their parents being informed of the arrest or their whereabouts.

Al-Monitor interviewed parliament member and head of the Egyptian parliament's human rights committee Mohamed Anwar al-Sadat, who won by a landslide over his opponent, Ayman Abu al-Ella, a candidate of the Free Egyptian Party and the Egypt State Support Coalition. Sadat laid out the committee’s plan to address several contentious issues, in particular amending the protest law. He said the body is preparing to visit prisons and holding meetings with the parents of the disappeared.

Al-Monitor:  What legislation will the committee put forward regarding human rights?

Sadat:  According to the constitution, the main legislation that should be passed includes the transitional justice law, the church construction law and the formation of an anti-discrimination commission [called for in Article 54]. We are also working on issuing legislation related to organizing the work of the National Council for Human Rights, the national electoral commission and the civil associations law. All these are priorities for the human rights committee, and perhaps other committees will take part to expedite work on these pressing laws.

Al-Monitor:  How would you assess the performance of the current human rights council?

Sadat:  At first, the council had a modest performance, but in its last year it took positive stances vis-a-vis human rights, freedoms in prisons and forced disappearances. Its performance under the current circumstances is good, and the law would give it several competencies that would help it do a better job.

Al-Monitor:  With the arrest of many youths under the new protest law, will its amendment be up for discussion again?

Sadat:  Yes, several members of the human rights committee, among others, and I believe that it is necessary to amend this law to reduce the sanctions imposed on protesters. We will examine the possibility of amending it during the first session, which is scheduled to end in two months. If we fail to do so, it will be among the top priorities during the second session.

Al-Monitor:  What is your take on the Interior Ministry's behavior toward journalists in Egypt, especially after the latest raid on the [Journalists'] Syndicate on May 1?

Sadat:  I support the freedom of the press and respect for citizens’ rights and dignity. I support the Interior Ministry’s implementation of the law, but I think both parties were mistaken. Unfortunately, this clash was the last thing we needed. They should have used common sense.

Al-Monitor:  Do you support the Egyptian journalists’ demands for the dismissal of the interior minister after the raid on the syndicate?

Sadat:  I think this does not have to be the solution to the problem. Another interior minister might come along and adopt the same line of action. I think the interior minister is not the problem. It is rather the police mentality and way of life that requires re-examination and more discipline. We cannot rely on a security mentality to address political issues, as this role is reserved for the legislative and executive authorities that seek to solve crises through dialogue and discussions.

Al-Monitor:  Will the human rights committee cooperate with the defense and national security committee to put forward a bill that would restructure the Egyptian police?

Sadat:  Of course, as the defense and national security committee is the one responsible for discussing this legislation with the human rights committee.

Al-Monitor:  Forced disappearances have been on the rise lately in Egypt, with the Egyptian security apparatus arresting citizens arbitrarily without notifying their parents of where they are being held. Will the committee open this file?

Sadat:  The forced disappearance issue is one of the committee’s top priorities. It will address this issue with the National Council for Human Rights [NCHR], which played a major role in this regard recently. The NCHR and the Interior Ministry have had extensive correspondence on this topic, and we will explore its content in addition to documenting such cases. The security apparatus should disclose the facts it has in this regard.

Security sources notified me about detainees who are held for investigation, amid parents’ claims of forced disappearance. Moreover, the Interior Ministry has documents asserting that some youths joined Islamic State affiliates like Wilayat Sinai in Cairo or Syria, among other countries where IS exists. Their parents know nothing about their fate, and they think their children have been forcibly disappeared.

As a human rights committee whose parliamentary members were elected by the Egyptian people, we will work with concerned parties to reveal the truth and expose it to the people at home and abroad.

Al-Monitor:  What are the committee’s measures to address this issue through the parliament?

Sadat:  Hearings will be conducted with the parents of some forcibly disappeared individuals in the presence of representatives from the Interior Ministry and the national security apparatus to find out the truth. This will happen in cooperation with the NCHR, and we will hopefully come up with written recommendations.

Al-Monitor:  What will happen with these recommendations?

Sadat:  The recommendations will be submitted to the presidency, the Justice Ministry, the Interior Ministry and the public prosecutor’s office, and perhaps other sovereign parties will participate since this issue is related to Egypt’s national security.

Al-Monitor:  The situation of jails is another human rights issue. Will the committee send a delegation anytime soon to Egyptian prisons that house youths and Islamists?

Sadat:  We will definitely carry out field visits to jails to check into their conditions, the situation of the prisoners and their rights including health care, good nutrition and a clean living environment. We will also ensure they are enjoying their right to engage in activities. Field visits will allow us to take a close look at all these conditions. The committee also includes former police officers who worked in prisons and who have a vision of improving prison conditions. Their opinions will be taken into account.

Al-Monitor:  What do you think of the way prisoners who are detained for political reasons are treated?

Sadat:  I have no idea what their situation is, but through field visits, we will find out whether there is maltreatment or bad service. Each prisoner should enjoy the same rights regardless of his political affiliation.

Al-Monitor:  When will these visits happen?

Sadat:  As soon as we are done with approving the committee’s plan of action and its final goals we will begin our field visits, probably in two weeks.

Sadat:  I always repeat that funding is not a crime. As long as it is granted under the state’s supervision and with its approval, it remains legal according to the constitution and international treaties that Egypt has signed. But it is important for the state to make sure that the funding serves activities that are in its interests and that this funding is granted through legal channels — banks, that is — to fulfill its purpose.

Besides, the money that funded organizations — be they associations or shareholding companies that are funded by the World Bank or United Nations — receive is monitored by the Accountability State Authority. All this is acceptable and must be encouraged by the state.

All these organizations play a role in villages and provinces and offer health, leisure and education services that are not provided by the government.

Al-Monitor:  Should there be legislation defining the work mechanism of civil society more strictly to pave the way for a greater margin of state control?

Sadat:  The goal behind the new legislation is to encourage civil society organizations and liberate them, but at the same time, it gives the state the right to be reassured over the activities of Egypt’s international community.

Al-Monitor:  The Egyptian parliamentary delegation that traveled to Italy last month to discuss the murder of young Italian student Giulio Regini did not come back with a positive outcome. Is the committee playing a new role in this issue?

Sadat:  First let me assert that the delegation’s visit was important, but it hasn’t reached any solutions on the ground because the Italians aren't budging from their position. They are demanding that the Egyptian government reveal the truth about what happened, and the human rights committee here is concerned with this issue. It will meet with some leaders in the security apparatus to find out the real dimensions of the story. It will also meet with local organizations that have additional information to complete the picture. These visits will be followed by a visit to the Italian parliament. In case of mistakes or breaches, we must face the truth and clarify it to the Italian side. Perhaps they will understand or reconsider their rhetoric that is escalating by the day.

Al-Monitor:  You previously talked about the security services intervening in holding elections for chairs of the parliamentary committees. After winning your committee seat by a landslide, with 38 votes as opposed to nine votes for your competitor, do you still have the same vision?

Sadat:  I became head of the committee because the members wanted to elect the most competent candidate. According to my information, in addition to the coordination between the Egypt State Support Coalition and the Free Egyptian Party, a security agency was supporting the candidate they had agreed on.

Al-Monitor:  So you did not ally with the Egypt State Support Coalition?

Sadat:  No, this is out of the question. The Egypt State Support Coalition is trying to find out what went wrong and why their plans failed.