Turkey’s president takes actions that sometimes seem like self-sabotage, like surprising Moscow with his recent statements on the Crimean Peninsula and his decision to complicate Russia’s export procedures. 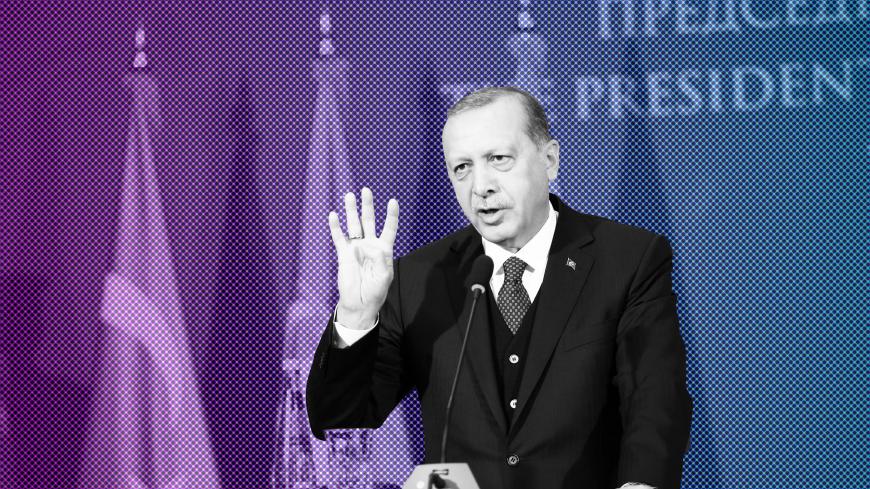 Turkey’s relationship with Russia seems to keep both sides on edge. Today, President Recep Tayyip Erdogan is praising Russia as Turkey’s partner in a new Syrian operation. He is proclaiming that Ankara will proceed with its purchase of the S-400 weapons system from Moscow — something he said was in doubt earlier in the week.

Last week, as Erdogan was visiting Ukraine, he directed a pair of irksome announcements toward Russia, one regarding the Crimean Peninsula and one about new import restrictions on Russian agricultural goods.

Erdogan traveled to Ukraine Oct. 9 for the countries’ High-Level Strategic Council meeting. He also met with Ukrainian President Petro Poroshenko. The sides signed a number of agreements and said they would work to raise the volume of bilateral trade to $10 billion a year, from $3.8 billion currently. Also, Turkey’s leading defense company, ASELSAN A.S., signed a $43.6 million contract to supply a communications system for the Ukrainian armed forces in 2018.

Poroshenko said he was satisfied with the negotiations’ results. “The meeting … has been completed in a very trust-based and constructive atmosphere,” he said during a joint briefing with his Turkish counterpart.

During the briefing, Erdogan assured Poroshenko that Turkey would continue to support Ukraine's sovereignty and territorial integrity.

“We neither did, nor will we, recognize the annexation of the Crimean Peninsula by Russia,” Erdogan said. The Turkish leader also said Ankara will continue to follow the situation of Turkic-speaking Crimean Tatars and thanked Ukraine for defending their rights.

Erdogan’s statements on Crimea were met with visible irritation in Moscow; Russians are very sensitive about the issue.

According to Moscow’s version of events, after former Ukrainian President Viktor Yanukovych was overthrown in March 2014, Crimea voted to secede from Ukraine and rejoin Russia. Russia says Crimean residents made the reunification decision democratically, in full compliance with international law and the UN Charter.

However, Ukraine and the rest of the world, including Turkey, don’t recognize the referendum as legitimate, calling the Russian move an annexation of the peninsula.

It’s not surprising that Russian authorities viewed Erdogan’s statements as unfriendly. Russian Sen. Alexey Pushkov said on his Twitter page that the status of the Crimean Peninsula can’t be altered and doesn’t depend on Erdogan's approval. Sen. Vladimir Jabarov, first deputy chairman of the Federation Council’s Committee on International Affairs, said such statements do not make the Turkish leader look good.

Ruslan Balbek, the deputy head of the State Duma Committee for Nationalities, suggested Erdogan send an official delegation to the peninsula to get an objective picture of what’s happening there.

Not all Russian authorities reacted as harshly. Georgy Muradov, the deputy chairman of the Republic of Crimea’s Council of Ministers, did agree that Erdogan’s statement on Crimea “cannot affect in principle the situation on the peninsula,” but he told Russian media that Erdogan is a flexible man who, when necessary, will successfully change his position.

Russian Sen. Franz Klintsevich, the first deputy chairman of the Federation Council’s Committee on Defense and Security, also said that Erdogan’s position on Crimea is in flux and that it would not interfere with Russian-Turkish cooperation in Syria and on other basic issues.

“Turkey has not yet decided on the Crimean issue” and currently has one foot in each camp, Klintsevich said, emphasizing the importance of bilateral cooperation on the Syrian conflict. Right now there is a rare chance in history when the relations between Russia and Turkey can change the situation in one of the key regions of the planet, he added.

Coincidently or not, on the day Erdogan was in Ukraine, Ankara unexpectedly set new rules for its imports of Russian agricultural products.

According to the new regulations, Russian agricultural exporters will have to obtain special permits from the Turkish trade mission or diplomatic departments to ship to Turkey. Some Russian political experts speculate that the new rules are necessary for Turkey to be able to identify and block Russian imports coming from the Republic of Crimea. Ukraine is seeking a full blockade of the republic internationally.

In practice, however, the restrictions have far more pragmatic goals. Turkey apparently hopes this pressure will prod Russia to lift all remaining sanctions against Turkey so both sides can put an end to the tit-for-tat trade sanctions they have engaged in since Turkey shot down a Russian jet in November 2015.

But the plan may have backfired.

Russian Agriculture Minister Alexander Tkachev said Oct. 11 that Russia will take action and is not going to “turn the other cheek.”

“We did not expect that; on the contrary, the customs regime should be simplified. If such developments continue, we will respond appropriately to imports of vegetables, citrus fruit, tangerines and oranges."