A unified Cyprus seems too much to ask

Despite long and dogged efforts, hopes for a unified island of Cyprus diminish as too many factors seem to favor the status quo. 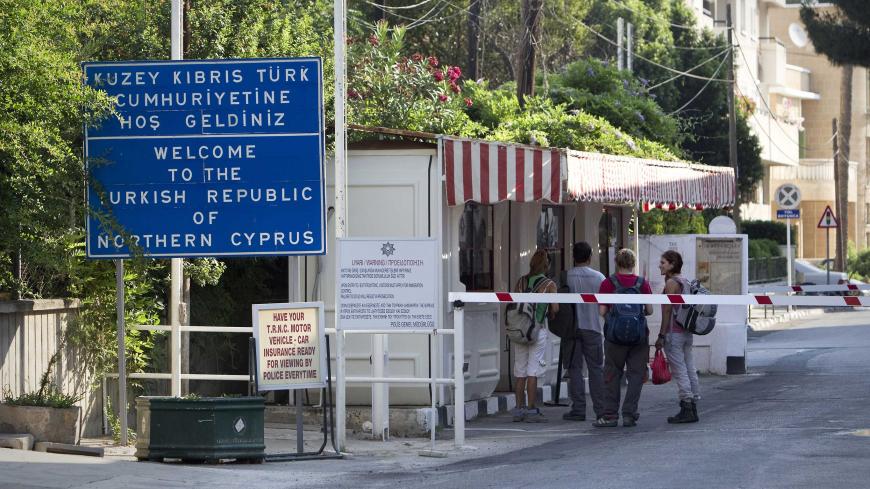 Tourists wait for their passports as they cross to Turkish-controlled northern Nicosia from the Greek side of the Cypriot capital via Paphos Gate pedestrian border crossing, June 28, 2012. - BEHROUZ MEHRI/AFP/Getty Images

Since July, when talks failed — for the 11th time — to generate an acceptable plan to reunify the island of Cyprus, Greek and Turkish Cypriots have been debating how to keep the idea of a bizonal and bicommunal federation alive.

Last week, Cyprus President Nicos Anastasiades announced he would seek his second and final five-year term. His focus, he said, would be to reunite the island. It's a tall order.

On Oct. 1, former British Foreign Minister Jack Straw penned a piece in The Independent declaring stillborn all efforts for an island federation. He was blunt, saying the status quo in the Greek south is simply too comfortable to convince that side to make any concessions. Given that so many rounds of talks have failed to coordinate even basic bicommunal cooperation activities — such as establishing a unified electric grid for the whole island or setting up a roaming agreement for mobile phones — unification has proven a challenge.

On Oct. 3, Tahsin Ertugruloglu, foreign minister of the so-called Turkish Republic of Northern Cyprus, made headlines in Turkey with statements he made at a roundtable at the International Republican Institute in Washington. Ertugruloglu concurred with Straw that the idea of a united island with a federal government is dead. But as the Turkish Republic of Northern Cyprus can't just keep waiting, he told the audience two options are being considered.

One possibility is establishing an independent state. However, since Turkey invaded and partitioned the island in 1974, the Turkish Republic of Northern Cyprus hasn't been recognized by any country except Turkey — though Ertugruloglu says there's been no major effort on the global scene to gain such recognition. To make matters more difficult, in 2004 Cyprus became a member of the EU, but without allowing the Turkish Cypriots to enjoy its benefits.

Ertugruloglu’s second option was to form a strong diplomatic system, like the one shared by Monaco and France, between the Turkish Republic of Northern Cyprus and Turkey, in which Cypriots would delegate defense and foreign policy matters to Ankara yet govern themselves independently on domestic matters.

Although both of these options seem much like the extension of the status quo for Cyprus, Ertugruloglu’s choice of words was rather alarming given the direness of the situation.

How were Ertugruloglu’s comments from Washington received in Cyprus? Sinan Dirlik, a columnist for the Turkish Cypriot newspaper Yeni Duzen, told Al-Monitor that Ertugruloglu’s position as foreign minister is symbolic and had little impact on the negotiations. It is Turkish Republic of Northern Cyprus President Mustafa Akinci who leads the process. Dirlik added: “Ertugruloglu just reiterates the well-known rhetoric of right-wing politics on the island in preparation for the 2018 elections. Yet his words generated a significant uproar here [in Cyprus]. Akinci had harshly criticized the foreign minister, who replied in kind.” Other political parties criticized Ertugruloglu for proposing plans that were never discussed by the parliament of the Turkish Republic of Northern Cyprus. Dirlik said, “Neither Turkey nor the Turkish Republic of Northern Cyprus has any goal of independence or confederation with Turkey as options. To the contrary, all these years of negotiations reinforced the idea of a bizonal, bicommunal federation.”

When asked about the mood on the island, Dirlik conveyed a rather dim picture in which hopes are fading. Yet there are still voices on both sides arguing that a federation would be best for cultural and financial reasons.

Ertugruloglu's controversial statements were mostly ignored by pro-government columnists and social media trolls. At a time when Turkish President Recep Tayyip Erdogan pushes ultra-nationalistic rhetoric, even he must have thought that endorsing Ertugruloglu would be counterproductive. In remarks from different senior bureaucrats in Ankara, Al-Monitor learned that the Cyprus issue, although important, is no longer a priority for the government given the situation in Iraq and Syria. However, foreign companies that are drilling for natural gas and oil at the invitation of Greek Cypriots are a matter of concern for the Turkish side.

Inside Turkey, reactions were polarized. In a TV interview from Diyarbakir province, people of Kurdish origin in Turkey highlighted the double standard the Turkish government held for Cyprus and Kurdistan after the Iraqi Kurds' Sept. 25 independence referendum. One said, “The Turkish government supports, finances and defends a handful of Cypriots to establish an independent state, but here it opposes the rights of millions [of Kurds] to establish their own state.” In the meantime, a handful of ultra-nationalistic Twitter users were posting maps of Cyprus as a part of Turkey. Turkey has 81 provinces and ultra-nationalists are now declaring Kirkuk as No. 82, Cyprus No. 83 and Mosul No. 84. Both Kirkuk and Mosul are in northern Iraq.

Yiorgos Kakouris, a journalist for Cypriot daily Politis, elaborated on the differences in political views presented at the July talks and how they were seen on the Greek side, "with Akinci insisting on finding a new way to negotiate peace, whether that’s partnership or separation; Ertugruloglu insisting that the federal model is dead; and Turkish government officials saying that the approach of Turkey and the north will be decided after the presidential election in the south" in January 2018. "This, the [Greek Cypriot] government spokesperson has said, is an indication that the Turkish side has no clear objective in mind at this point."

He continued: “The official government line regarding the options put out by Ertugruloglu is, of course, that they are unacceptable and that the only option is negotiated reunification. No political power, even the most extreme, has dared to speak of an official partition openly and is unlikely to, despite reports that certain political figures, including the president, have — behind the scenes — considered the scenario of two separate states within the EU. Publicly and privately, of course, everyone denies it.”

Van Coufoudakis, professor emeritus of political science at Indiana University-Purdue University Fort Wayne, provided a different angle that is not addressed in Turkish news. “The two options [Ertugruloglu] advocates are unacceptable to the Republic of Cyprus and do not provide a viable alternative to the present situation. Over the years, Ankara and its Turkish Cypriot surrogates have sought but failed to get recognition of the so-called TRNC [Turkish Republic of Northern Cyprus]. The UN Security Council, in unanimous resolutions [in 1975 and 1983], has found this 'state' to be illegal and has called on the international community not to recognize it," he said.

"European Court decisions consider the Turkish Cypriot 'authorities' to be 'a subordinate administration to the Turkish army.' The international position on the 'TRNC' follows the policy established by the 1932 Stimson Doctrine of not recognizing entities that are the fruit of aggression. This principle has been followed to this day, including the most recent case in Ukraine.”

Could a different model of existence prove useful for the north? Coufoudakis provided a straightforward analysis. “President Erdogan wrongly believes that if some Islamic states recognize the 'TRNC,' the rest of the world will follow, or at least grant the 'TRNC' a status similar to that of Taiwan. Any attempt to seek recognition of the 'TRNC' would mean the end of any hope Turkey may still have for EU accession. The EU will not tolerate secession in one of its country members. Any attempt at recognition will also confirm Turkey's real intentions when it invaded and occupied portions of the Republic of Cyprus in 1974.”

Coufoudakis explained why consecutive talks keep failing. “Any resolution [plan] proposed by UN mediators based on the unprecedented construct of the 'bizonal, bicommunal federation' … will have to be approved by separate referenda. The Greek Cypriots, once again, will reject any formula replacing the Republic of Cyprus with a two-state confederation affirming the result of the 1974 invasion. The Greek Cypriots will never agree to any form of a Turkish guarantee or military presence on the soil of an EU member. Citizens of the Republic of Cyprus have ample evidence of how Ankara and its military control every aspect of life in occupied Cyprus, have seen the consequences of the Islamization of occupied Cyprus and the impact of the illegal Turkish settlers on the original cohesive Turkish Cypriot community and its politics.”

The Turkish government’s silence, along with harsh criticism from other factions of Turkish Cypriots toward Ertugruloglu’s two provocative alternatives, suggest they prefer the status quo to any dramatic action that might be detrimental to the interests of the Turkish side.