After two years in Syria, what’s next for Russia?

Russia and the United States are curious about each other's long-term goals in Syria, and each believes the other has something up its sleeve. 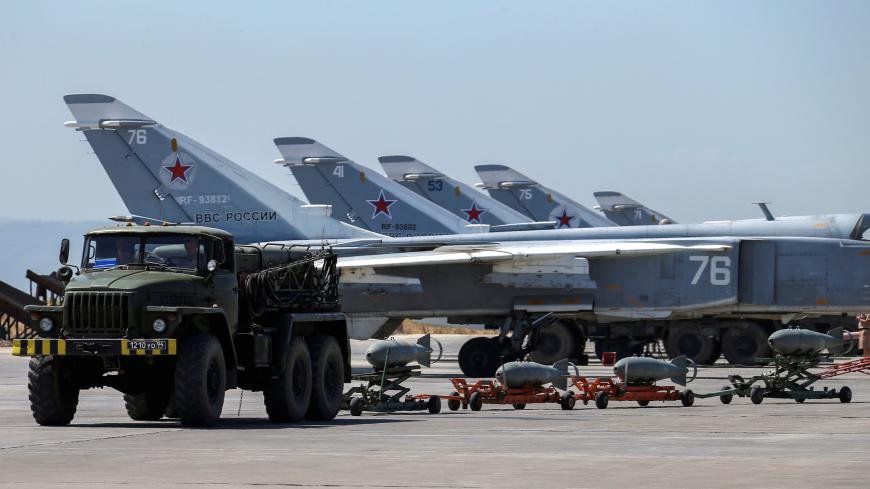 Two years have passed since Russia began its military campaign in Syria. The Russian military has reached this milestone as victors, with reports of liberating almost 90% of the country’s territory from Islamic State (IS) militants. Average Russians do not care much that this accomplishment was achieved through the joint effort of many countries. What they do care about is feeling assured that a final victory is not far off. However, military reports and statements by diplomats imply that the main battle for Syria's future is still to come.

The Russian Defense Ministry regularly reports on operations in Syria, but after Moscow decided in March 2016 to withdraw most of its main forces, access to the figures became rare. Now, as Moscow assesses its time in Syria, the ministry's official publication, Krasnaya Zvezda newspaper, has published some statistics.

Precise figures for Russia's military operational costs in Syria are not available. According to the Russian government news agency Tass, from Sept. 30, 2015, to March 15, 2016, when Russia announced it would reduce its presence in Syria, the war had cost Moscow an average of $2.8 million per day (using an exchange rate of 70 rubles per dollar). Estimates from Russia’s RBK daily business newspaper differ, at $2.5 million daily.

In contrast, the United States was spending about $11.9 million per day on its own fight against IS in Syria and Iraq.

In July, the Yabloko Party — one of the political opposition groups in Russia — released its own estimates, suggesting that in the 17 months since the drawdown, Russia's military costs might have reached 108 billion to 140.4 billion rubles (about $1.7 billion to $2.25 billion, according to the average exchange rate of 62 rubles per dollar for the period).

The Russian Defense Ministry rebutted those claims, saying campaign costs have not exceeded the ministry’s estimates.

The real cost of any military campaign, of course, is the number of human losses. Russian official sources confirmed Oct. 1 that 37 personnel had died, including officers. That figure includes Lt. Gen. Valeriy Asapov, who died Sept. 24 near Deir ez-Zor, and one noncombat loss — a contract soldier who officials said committed suicide at Khmeimim air base in the fall of 2015.

Some other estimates, however, peg the number of dead significantly higher. Reuters estimated Aug. 2 that 76 Russian military personnel and private contractors had died in Syria since October 2015, including at least 40 just this year. The news agency said its estimate might even be conservative and, despite the drawdown, indicates "a significant rise in the rate of battlefield losses as the country’s involvement deepens."

There are more figures, without which the picture of Russia’s military campaign would be incomplete. In its two years in Syria, Russia has tested more than 600 weapons, 200 of which proved highly efficient in performing their set military tasks. Today, most of Russia’s sales contracts are signed for the weapons put to the test in Syria. In 2015, Russian military exports reached $14.5 billion; in 2016 they exceeded $15 billion, and in the first half of 2017 they reached as much as $8 billion.

By the first anniversary of the military campaign in Syria, Russian authorities were trying to prove to citizens that Syria had not become a second Afghanistan, in that the Syria engagement was short-term and cost-efficient. For the second anniversary, Moscow is pointing to victories, though there is a rivalry between Russia and the United States for credit in those victories. The rivalry has been especially noticeable in recent weeks in the battle for Deir ez-Zor, as well as in activity in the de-escalation area in Idlib.

The Russian military has repeatedly accused the US-led coalition of cooperating with militants of both IS and Jabhat al-Nusra, and reproached the US-allied Syrian Democratic Forces (SDF) for their strikes at Syrian troops. Similar statements were issued by the Pentagon following Russia's strikes on SDF positions.

Despite their differences, the United States and Russia have not interrupted their military coordination, which they expect to continue until Syria is rid of IS and Jabhat al-Nusra. The bigger question is what's next.

Last month, Russian Foreign Minister Sergey Lavrov said the defeat of the terrorist groups will be a litmus test for Washington’s true intentions. “Our American colleagues, including [US Secretary of State] Rex Tillerson, vow that in Syria they pursue no other goal but the defeat of terrorists. As soon as it happens, it will become crystal clear whether it is true or whether the US is set on some other political goals we don’t know of as yet."

Meanwhile, Moscow’s own ultimate goals are equally vague. “Strategically, we do not aim at gaining a foothold in the region. Our aim is to fight international terrorism, which poses a threat to Russian national interests,” stated Alexander Lavrentiev, President Vladimir Putin’s special envoy on the Syrian settlement.

The truth of the matter is, Moscow is not going to give up on its military bases in Tartus and Latakia, and Russian companies will hardly be willing to let go of their contracts in Syria. The list of questions Russian leadership is potentially pondering now include: What should the timeline for troop withdrawal be when the terrorists are finally defeated? Who is likely to ensure the observance of peace in Syria? And will Syria become another Afghanistan for Russia if the terrorists take revenge as soon as Russian forces leave?

On the other hand, staying in Syria too long would imply Russia had become a neocolonial empire, an image and role Russia has been doing its best to avoid. Moreover, some of the local residents in Latakia told Al-Monitor that Syrians' attitudes toward Russian troops have become quite ambivalent. The forces are said to be losing popularity even among the Alawites, and the longer they stay in Syria the more negative this attitude becomes.

There is other bad news for Moscow — Russia may have to invest more in Syria’s reconstruction than previously estimated. In this respect, Syrian President Bashar al-Assad's presence raises complications for the long run. When representatives of 17 foreign ministries met last month to discuss Syria, they concluded: "Recovery and reconstruction support for Syria hinges on a credible political process leading to a genuine political transition that can be supported by a majority of the Syrian people."

In other words, money for reconstruction will be allotted on the condition that Assad steps down. Russia does not agree with the plan, but Moscow was not invited to the meeting and is probably going to be squeezed out of other talks on Syria. Yet, as long as the Russian military remains in place, getting rid of Assad will not be easy. The power factor will still be key in upcoming negotiations on Syria's future. But there also will be a sharp increase in the competition — not only from the United States, but also from those who now seem to be on the same side of the fence as Moscow: Iran, Turkey and even China, which did not intervene in the military campaign, but is quite willing to invest in the Syrian economy. Thus, it is important for Moscow to define its strategy in Syria for years to come. Otherwise, all the losses it suffered and all the investments it made will be in vain.