Not much is known about the detention of prominent Turkish businessman and philanthropist Osman Kavala, and the ruling party and its loyalists seem to be building a slander campaign against him in the media. 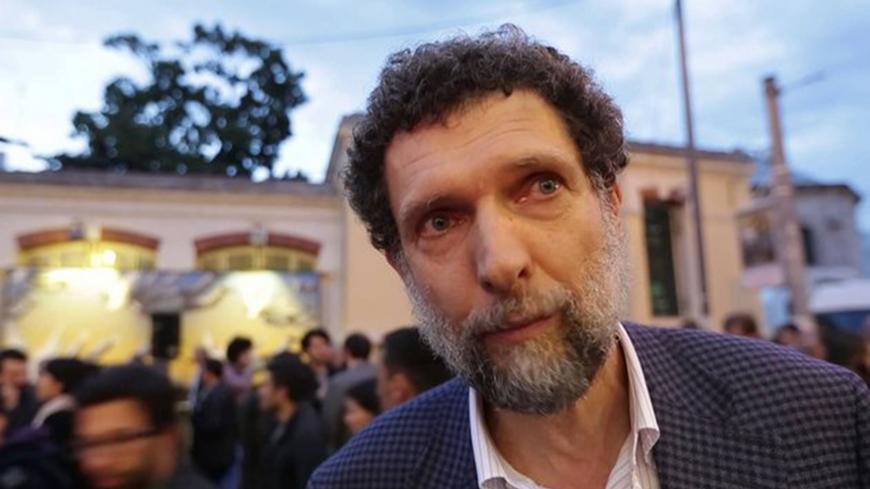 Prominent businessman and philanthropist Osman Kavala, a tireless and generous supporter of civil society in Turkey, is seen in this image posted Oct. 20, 2017. - docu8 News

The veil of secrecy shrouding the detention of Osman Kavala, a tireless and generous supporter of civil society in Turkey, has yet to be lifted since his detention at Istanbul’s Ataturk airport on Oct. 18.

But the slander campaign against the prominent businessman and philanthropist is continuing full blast. Aydin Unal, a columnist for the pro-government Yeni Safak, likened Kavala to Fethullah Gulen, the Pennsylvania-based imam who is accused of seeking to violently overthrow Turkish President Recep Tayyip Erdogan. “It is quite clear that Kavala, just like Fethullah Gulen, is one of the baby-faced, masked as peace-loving, humanitarian-seeming tools collected internally to carry out the West’s operations on Turkey,” he wrote in his column today.

Sources with close links to the government speculate that Kavala’s detention is connected to an ongoing witch hunt in Turkish civil society. Many believe it was initiated by a mix of nationalists and pro-Russian “Eurasianists” in the judiciary and the security services bent on unmooring Turkey from the West. The same circles have been blamed for the flimsily documented terrorism charges, among others, that are being leveled against 11 human rights defenders, including Amnesty International's Turkey chair Taner Kilic and the group’s Turkey director Idil Eser, who will appear in court this week.

At least 62,000 people have been arrested and 111,000 others fired from public service and blacklisted since the July 15 coup attempt. Kavala’s detention, however, marks an escalation. He is widely acclaimed in European circles, particularly for a swath of projects aimed at nourishing trust between Turkey and Armenia.

These colorful and often emotion-filled events are typically hosted in the heart of Istanbul at a cavernous old warehouse formerly used to store tobacco and an elegant 19th century building. Both belong to Kavala. Kavala has also cooperated with the government to help restore ancient Armenian and Greek churches that had been left to decay across Anatolia through Anadolu Kultur, the non-profit through which most of his activities are run.

His plight has prompted a flurry of condemnation worldwide. France’s Foreign Ministry registered its protest, calling Kavala “one of the most important and respected figures of the Turkish cultural scene and civil society.” State Department spokesperson Heather Nauert said Kavala’s detention was a further example of a “very alarming trend” that “chills public debate.”

All of his work is now being used to “prove” his covert cooperation with Turkey’s foes.

The lanky animal lover’s quiet efforts to promote now stalled peace between Turkey and the country’s long-oppressed Kurds are also being manipulated to blacken his name. He is being falsely accused of inspiring the slogan “We will not make you [Erdogan] president” that helped propel the pro-Kurdish People’s Democratic Party into the parliament for the first time in the June 2015 parliamentary elections.

It was prominent pro-Erdogan columnist Hilal Kaplan who fired the first warning shots against Kavala. In an August 2015 column for Sabah, Kaplan claimed that Kavala had close and enduring commercial ties with the Turkish army and notorious mobster Sedat Peker. She omitted the latter’s adulation of Erdogan. Nor did Kaplan mention her participation in Kurdish peace-themed discussions hosted at Kavala's Cezayir Restaurant, to her contributions to a journal he founded or her acceptance of a journalism prize he helped organize.

Kavala refuted the allegations in an article for the now shuttered Radikal newspaper and is believed to have taken Kaplan to court. A fresh attack was launched against him last month in the online portal Yekvucut. The site is affiliated with Bosphorus Global, a public relations outfit Kaplan’s husband Suheyb Ogut helps to run from a waterfront villa on the Bosporus.

The group, whose main purpose is to discredit critical opinions about the government, is thought to have close ties to Erdogan’s son-in-law, Energy Minister Berat Albayrak. Its team of spin doctors is widely rumored to have helped feed the media campaign against former Prime Minister Ahmet Davutoglu, who was forced to step down amid claims he was in league with Gulen — and with Germany, ostensibly because of his German-language schooling.

Erdal Dogan, a prominent human rights lawyer who represents Amnesty’s Eser, reckons that the continued media attacks against Kavala suggest that his detention without charge may be extended by another week, as permitted under Turkish law.

The case of Saban Kardas, who heads the Ankara-based Center for Middle Eastern Strategic Studies think tank, has drawn markedly less attention. Kardas, who was on friendly terms with the government, was detained a day after Kavala at his Ankara home, purportedly in connection with the same investigation.

“All of this needs to be assessed within the broader context of a push to silence all of the government’s existing and potential critics,” Dogan told Al-Monitor. “It kicked off with journalists and elected politicians. It is continuing with a second wave of arrests of civil society activists. The final phase against professional chambers, lawyers, doctors, environmentalists, is yet to come.”