The dark days of Turkey in the 1990s could be creeping back as at least four men have gone missing under similar suspicious circumstances in Ankara since March. 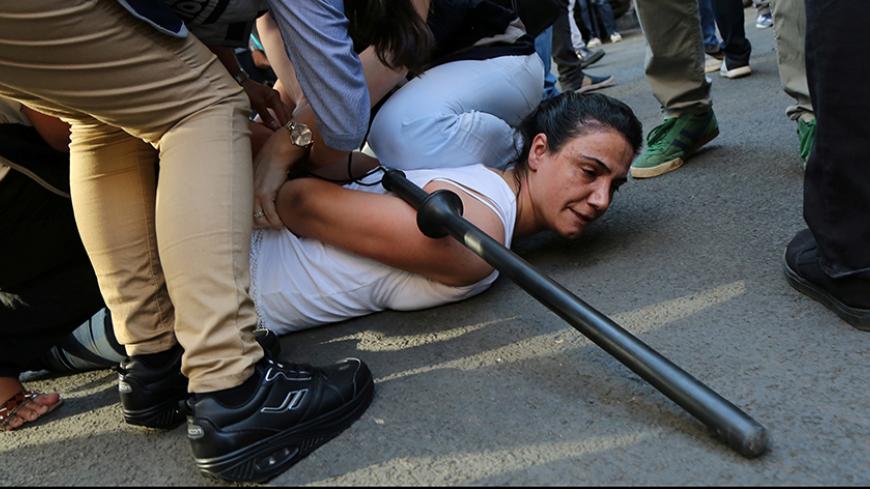 Police officers detain a demonstrator during a protest against the dismissal of civil servants following a post-coup emergency decree in the Kurdish-dominated southeastern city of Diyarbakir, Turkey, July 17, 2017. - REUTERS/Sertac Kayar

Those alarmed by Turkey’s dizzying descent into authoritarianism had found bleak solace in the fact that unlike the 1990s, when the conflict between Turkish security forces and the Kurdistan Workers Party was at its peak, at least the people aren't disappearing or losing their lives in extrajudicial killings.

That may be changing: The New York-based watchdog Human Rights Watch (HRW) has asked the Turkish authorities to urgently investigate what it called the "abduction and possible enforced disappearance" of at least four men in Ankara since March. One of them, a former school teacher, was located in police custody after 42 days. An eyewitness saw men who identified themselves as police nab Onder Asan in April, forcing him out of a taxi and shoving him into a van. His family finally learned of his whereabouts only after a call from the police. He has since remained in custody pending trial for his alleged terror links, which is shorthand these days for connections to Fethullah Gulen, the Pennsylvania-based cleric who is accused of plotting last summer's coup attempt. Asan said he was held in a secret location where he was interrogated and tortured for 42 days. He has filed a criminal complaint.

HRW said the other three, who remain unaccounted for, shared several features. They were either teachers or civil servants and again had been “bundled into a black or dark-colored Volkswagen Transporter van, accounts that are corroborated by security camera footage."

Emine Ozben, the wife of one of the abductees, said her husband had left the house on May 9 to buy bread and never came back. A group of female students present at the scene saw him being hauled away in broad daylight. They rang the police emergency hotline to report the incident but to no avail. Ozben told the BBC that she asked the witnesses why they hadn’t intervened. They responded that one of the assailants, who wore a ski mask, wagged his finger at them threateningly, so “naturally they were afraid.” Ozben broke down in tears as she recounted her story, saying her only wish is that “he is still alive.” Her husband, an academic, was among tens of thousands purged from his institution over alleged ties to Gulen.

The government has yet to respond to separate petitions filed by opposition lawmakers demanding information on the missing.

The recent crackdown on human rights defenders is making such cases harder to document. At least 43 human rights defenders who sought to draw attention to the plight of two jailed hunger strikers were detained on Saturday in Istanbul and remain in police custody. According to Turkey’s Human Rights Association, they include its Istanbul branch chair Gulseren Yoleri and executive board member Dogan Ozkan.

In July, Turkey arrested 10 prominent human rights activists, including Amnesty International’s Turkey director Idil Eser, accusing them on the flimsiest of evidence of plotting to sow chaos. Among them are a German and a Swedish citizen who were training their Turkish colleagues to help carry out their work in the climate of repression cloaking Turkey. The seminar conducted at a hotel on an island off the coast of Istanbul included digital security and tips for coping with stress.

Turkey has been under emergency rule since last July’s coup attempt. In January, the government issued a decree reducing the period police may detain citizens without charge from 30 days to seven. It is allowing detainees early access to their lawyers again. "But these positive measures appear to have been insufficient to curb abuse of detainees in police custody,” HRW said.