The Donald Trump administration has allowed a yearlong deal to pay stipends to the Kurdish militia to expire. 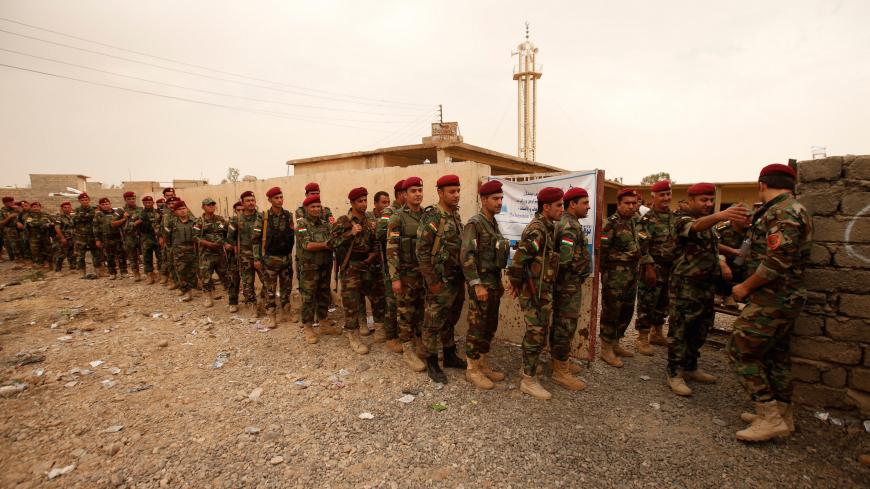 The US government has stopped paying Kurdish peshmerga fighters’ salaries after a yearlong agreement expired over the summer, and there are no current plans to renew it.

Under the deal negotiated by the Barack Obama administration in July 2016, the United States agreed to pay stipends to some 36,000 Kurdish fighters battling the Islamic State (IS) in Iraq. The agreement was expected to be renewed over the summer for another year, but US and Kurdish officials tell Al-Monitor that talks stalled as the Kurdistan Regional Government (KRG) pursued a divisive referendum on independence and the IS presence in the region began to collapse.

“The department does not currently fund stipend payments for the peshmerga,” Defense Department spokesman Eric Pahon told Al-Monitor. “The memorandum of understanding between the Department of Defense and the KRG facilitating stipend support during the Mosul operation expired in July 2017, and the final stipend payment was transferred in early September.”

Peshmerga sources flatly accuse the Donald Trump administration of withholding support because of opposition to last month’s nonbinding referendum. The United States has taken Baghdad’s side in the dispute and refused to recognize the results, which indicate overwhelming support for Kurdish independence.

Pahon declined to comment on what he called “internal business matters.” He said the United States and the KRG did not have “any talks on the table” about renewing the memorandum of understanding for months prior to the Sept. 25 vote, “so the referendum has no effect at this point.”

The Pentagon in May released a budget request for fiscal year 2018 that assumed that the memorandum of understanding would be renewed this past summer. The request for the fiscal year that started Oct. 1 calls for $270 million for peshmerga stipends and $95 million for “sustainment," 26% more than the $289.5 million requested for fiscal 2017 during Obama’s last year in office.

The budget request says the cost estimate for fiscal 2018 assumes the Department of Defense and the Ministry of Peshmerga would extend the memorandum of understanding for sustainment of peshmerga forces involved in achieving key objectives to counter IS. The request said the memorandum of understanding would, in addition to providing stipends, also facilitate Department of Defense "provision of weapons, ammunition, food, fuel, mobility assets, and sustainment support to the peshmerga.”

That May request may be moot, however, now that the memorandum of understanding has expired. Pahon said the budget is “not a static entity” and is expected to go through “tweaks and changes to match current operating conditions” as the counter-IS campaign targets the militant group’s last remaining holdouts in Iraq’s Anbar province.

Regardless, Pahon said the Pentagon continues to support the peshmerga with other forms of “military cooperation and security assistance” such as training and equipment.

“The stipend is not the entirety, or even the bulk, of our support for peshmerga forces fighting [IS],” he said. “We are providing the necessary support to our partner forces, at the approval of the government of Iraq, for ensuring the defeat" of IS.

Congress has also weighed in on the issue. A provision in the House of Representatives’ annual defense bill released in June threatened to cut funding for the peshmerga if the KRG decides to split from Baghdad, a clear signal to Erbil ahead of the referendum.

Separately, the Trump administration authorized a military sale in April worth nearly $300 million to equip two peshmerga brigades and arm them with 36 howitzers and small arms. Sources in Erbil say those weapons have yet to arrive.

Ismail, the Kurdish general, told Al-Monitor he did not remember the last time peshmerga troops received US weapons shipments, and said remaining American-supplied ammunition stocks were “not enough” for the fight against IS.

If the referendum does impact relations between Baghdad and Erbil, the Pentagon worries it could limit the fight against IS at a time when the militant group has lost more than 90% of its self-declared caliphate. In operations over the summer, Pentagon officials said, peshmerga fighters established a defensive line that ensnared or killed hundreds of IS fighters fleeing from Tal Afar.

Experts expect military support to continue to the peshmerga once tensions around the referendum subside.

“There are probably some hurt feelings,” Michael Knights, a Lafer fellow at the Washington Institute for Near East Policy, told Al-Monitor. “I think you would just wait for things to cool off.”