Economic opportunities in the Gaza Strip following the Fatah-Hamas deal could prove beneficial to Cairo, yet the fragile security situation poses potential obstacles. 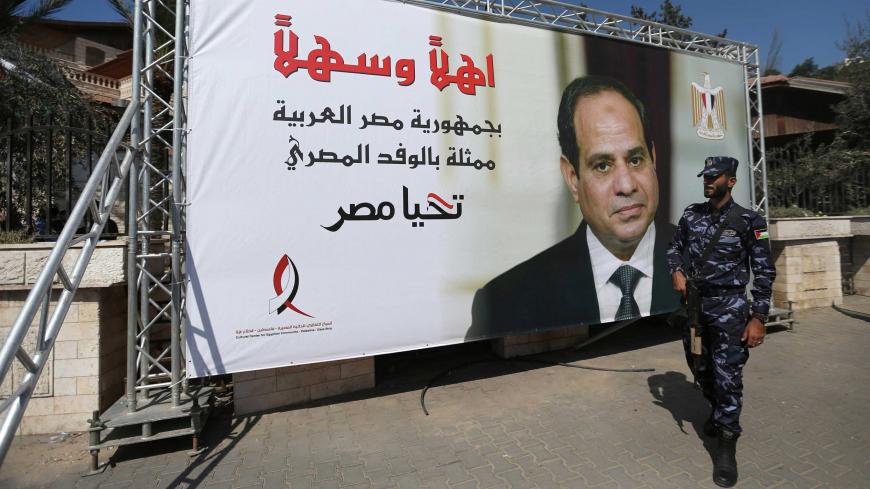 CAIRO — The  Egyptian-brokered reconciliation deal between Fatah and Hamas signed on Oct. 12 could have major economic repercussions for Cairo. The agreement comes after a 10-year-long dispute against the backdrop of Hamas' takeover of the Gaza Strip following its victory in the 2006 legislative elections with 76 out of 132 seats and infighting with Fatah in 2007.

The reconciliation has so far generated positive opinions and forecasts by economic experts anticipating a boost in both Palestine's and Egypt’s national economies. They argue that stability in the Gaza Strip would promote economic recovery and reconstruction, and in light of the low business costs with the adjacent enclave, Egyptian businessmen and companies are most likely to be one of the main stakeholders.

Others downplay the effects of reconciliation on the economy and the flow of goods and people through the Rafah crossing, which remain subject to security controls within the scope of the Egyptian war on terrorism.

Abu Bakr al-Deeb, an Egyptian journalist specializing in economic and Arab affairs, told Al-Monitor, “The Palestinian reconciliation means a stable government that controls all sectors in Gaza. This implies a broad reconstruction process in which the cost component is key. Given that Egypt is adjacent to the Gaza Strip, it would incur the lowest costs if it takes part in this reconstruction process. This is not to mention Egypt’s political and security influence as the reconciliation sponsor.”

He added, “Trade activities will significantly surge in the construction, health and food sectors. The proceeds are estimated to hover around $10 billion in five years. But Hamas is stuck between the hammer of the Israeli siege on Gaza and the anvil of the Egyptian lack of cooperation with it, which prevented it from meeting the basic needs of the Gazan citizens.”

Deeb also expected Hamas not to give in to Iran's and Qatar’s pressure to refrain from economically cooperating with Egypt. It should be noted that Qatar and Iran, Hamas’ main supporters and financiers, have strained political ties with Cairo.

Meanwhile, Hassan Nafaa, the head of the faculty of economics and political science at Cairo University, downplayed Egypt’s economic benefits ensuing from the Palestinian reconciliation.

Nafaa told Al-Monitor, “Economic relations between Egypt and Palestine are closely linked to stability inside Palestine. Any security incident between Palestinians and Israelis could have a snowball effect. The reconciliation between Hamas and Fatah is fragile and faces many obstacles. Any incident, no matter how insignificant, may bring the situation back to ground zero.”

He explained that “although Israel and the United States greenlighted the reconciliation to curb Hamas' domination over the Gaza Strip … disarming Hamas remains their undeclared objective. Hamas will not take this lying down, and any attempt to disarm it may undermine the reconciliation, putting an end to all prospects of political stability or economic recovery.”

Nafaa added, “Under the reconciliation deal, the Fatah-led Palestinian Authority is expected to take over Hamas-run government offices in the Gaza Strip. Then it will see that Hamas has replaced thousands of its staff with staff members affiliated with it. Hamas will never accept the dismissal of its affiliated employees from ministries and government and security bodies. This would make Fatah’s takeover a mere formality, and Gaza’s ministries will remain controlled by Hamas. This could undermine the reconciliation and renew the dispute.”

In turn, Amru al-Gohari, the undersecretary of the parliament's Economic Affairs Committee, told Al-Monitor, “Reconciliation and the end of division among the Palestinian factions would help the Palestinian cause. But talking about a renewed trade exchange between the two countries is very difficult amid high alertness by the Egyptian security forces battling terrorism. The entry and exit of goods and people through the crossings undermines security control, especially in light of the lack of modern devices to detect smuggled goods in containers, whether weapons or [something else].”

The spokesman for the Fatah movement in Cairo, Ambassador Hazem Abu Shanab, told Al-Monitor, “In April 1998, Egypt signed a Bilateral Investment Treaty with Palestine that entered into force in December 1999. However, political developments and the Palestinian division led to a setback in trade relations between the two countries.”

Abu Shanab stressed that the Palestinian imports exceeded $5 billion from Israel in 2016 compared to about $70 million from Egypt. “However, Egypt can top the list of countries exporting to Palestine. The Palestinian consumer trusts Egyptian goods, which offer high quality and competitive prices. This can tilt the balance in Egypt’s favor,” he added.

Abu Shanab explained that the Cairo-brokered reconciliation between Fatah and Hamas allows the Palestinian government to have a presence in the Gaza Strip, paving the way for concluding trade agreements and setting the security controls necessary for facilitating the movement of goods and individuals between the two countries.

He pointed out that the reconciliation is also expected to lead to the opening of the Rafah border crossing, which will promote trade activities between Egypt and Palestine. “This would make Egypt a gate for Palestine toward the Arab region and the world,” Abu Shanab said.

by Murielle KASPRZAK and Joseph SCHMID | AFP | May 26, 2022
END_OF_DOCUMENT_TOKEN_TO_BE_REPLACED