Palestine will witness the birth of the first movement of farmers in the Arab world, which will advocate the rights of Palestinian farmers before Arab, regional and international institutions. 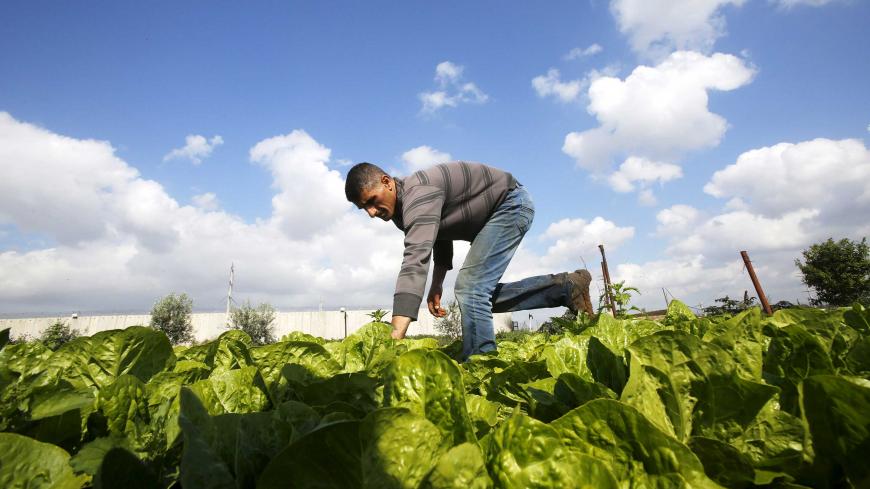 A Palestinian works on his farm close to the controversial Israeli barrier near the city of Qalqilya, West Bank, March 30, 2016. - REUTERS/Abed Omar Qusini

RAMALLAH, West Bank — The Union of Agricultural Work Committees is finalizing preparations for the launch of La Via Campesina-Palestine at a conference in the West Bank city of Ramallah on Nov. 29. Palestine will be the first Arab member of the international farmers movement La Via Campesina, also known as the International Peasants Movement.

La Via Campesina was founded in 1993 by agricultural organizations from different countries around the world as an independent movement opposed to globalization and global capitalism and its monopoly policies. The movement promotes food sovereignty as a political concept that requires sovereignty over land, resources and water, and is based on the right of nations and peoples to exploit their own resources.

La Via Campesina-Palestine relies on the vision of the international movement in advocating sovereignty over food, land, resources and water. It seeks to advocate the issues of Palestinian farmers and claim their rights violated by Israel, such as not being denied control over their own land and water resources.

Fuad Abu Saif, the director general of the Union of Agricultural Work Committees, told Al-Monitor, “The launch of La Via Campesina-Palestine — the first in the Arab world — is vital. Its main role will be to claim, and focus on, the rights of farmers. It will also garner local, regional and international support for this cause. Palestinian farmers are not only struggling under the bad economic situation or poverty, they are also denied access to their rights and are unable to exploit their resources controlled by Israel, amid marginalization and neglect by the Palestinian Authority and its government.”

He explained that La Via Campesina-Palestine will primarily focus on mobilizing political, legal and public support for farmers' issues related to Israel's violations such as expropriation of lands, the expulsion of farmers from their fields, confiscation of water sources and transformation of fields and farms into military training grounds.

Abu Saif added, “We will open a file on the rights of farmers taken away by Israel at the international movement, which includes about 200 million farmers from 100 countries, and we will ask them to foster and promote this cause. This will allow us to benefit from their power to put pressure on their governments.”

According to statistics by the Abdullah Al-Hourani Center for Studies and Documentation affiliated with the PLO, Israel confiscated more than 12,326 dunums (roughly 3,046 acres) of Palestinian land in the West Bank in 2016, a sharp increase of 127% compared with 2015.

Meanwhile, statistics issued by the Palestinian Central Bureau of Statistics on March 22, 2015, marking World Water Day, showed the “Israeli daily share per capita of water consumption was seven times higher than the Palestinian's.” On this same day, Palestinian Prime Minister Rami Hamdallah said in a speech that Israel controls some 90% of Palestinian water resources.

La Via Campesina-Palestine will also focus on the financial needs of farmers. “Farmers will receive financial support and the Palestinian movement will cater to their needs by building agricultural roads and water wells, for instance. Priority will be given to farmers in marginalized areas threatened by the risk of deportation and expulsion by Israel,” Abu Saif said.

He noted that a strong movement of farmers would push the official institutions and supporting international organizations to respond to the demands of farmers and to allocate more financial resources for implementing much-needed projects.

Abu Saif said, “In line with the responsibility of the Palestinian movement toward Palestinian farmers, La Via Campesina-Palestine will address the neglect and marginalization suffered by these farmers as a result of the Palestinian policies, such as low subsidies for farmers and their exclusion from the social security law and other unfair measures.”

He added, “The agricultural sector has been marginalized by the Palestinian Authority. It is unreasonable to allocate only 1% of the general budget to the Ministry of Agriculture and to this sector. This ratio does not allow farmers to stay in the marginalized areas threatened by [Israeli] settlements and does not contribute to raising the contribution of agriculture to the gross domestic product."

Abu Saif said, "La Via Campesina-Palestine will exert efforts with the local authorities and the government to amend the laws in line with the needs of the farmers. For instance, it is inconceivable that the social security law does not cover farmers and that the Palestinian Disaster Risk Reduction and Insurance Fund does not pay any money to farmers affected by severe weather conditions or Israeli measures.”

The announcement of the launch of La Via Campesina-Palestine in November will be the starting point for the activities of the movement and its work in the field across Palestine and the world, and an opportunity for Palestinian agricultural institutions and unions to follow suit.

Ahmad Jaradat, a member of the farmers committee tasked with establishing La Via Campesina-Palestine, told Al-Monitor, "The vast majority of Palestinian agricultural institutions are familiar with international farmers' movement La Via Campesina or are working under its umbrella. La Via Campesina is open to welcome all those who wish to join it.”

Jaradat added, “Following the launch of La Via Campesina-Palestine, dozens of activities and meetings will be held with farmers in the West Bank and Gaza Strip,” noting that a website will be launched for the Palestinian movement and will serve as a gateway to convey messages in various languages and highlight the rights of the farmers and the challenges facing them.