Iraqi Prime Minister Haider al-Abadi has tightened measures against the Iraqi Kurdistan Region following the Sept. 25 independence vote, a moved welcomed by those opposed to the referendum both domestically and abroad. 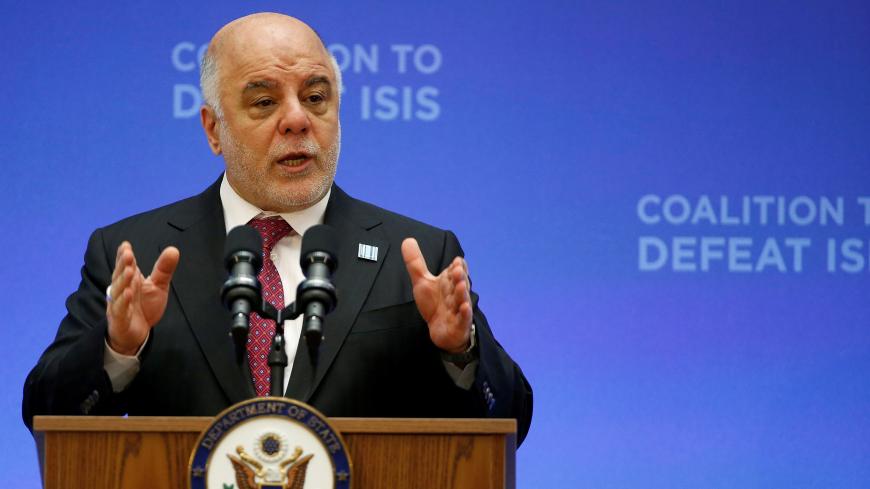 Iraqi Prime Minister Haider al-Abadi delivers remarks at a ministerial plenary for the global coalition working to defeat the Islamic State, at the State Department in Washington, March 22, 2017. - REUTERS/Joshua Roberts

In a meeting with parliament members Sept. 27, two days after authorities in Erbil held a referendum on Kurdish independence, Iraqi Prime Minister Haider al-Abadi said he would impose the rule of federal authority by force in the Iraqi Kurdistan region via the constitution and the law. Addressing Kurdish authorities, Abadi said, “You become my partner in governing Iraq; I become your partner in governing Iraqi Kurdistan. The equation should be like that.” Abadi also warned the Kurdistan Regional Government that he would surprise them with a series of measures against the separatist movement within its government. At the same time, he also announced that he would not take any punitive measures against Kurdish citizens, that he would not accept any assault against them and that he wouldn’t accept any violence against citizens — whether or not they were Kurds.

In tandem with the executive measures, Abadi is attempting to take legal action against Kurdish authorities for holding a referendum that the federal court prohibited. Abadi also is attempting to activate old corruption lawsuits against Kurdish officials, especially one involving Massoud Barzani, the president of Iraqi Kurdistan. On the day of the referendum, the Iraqi Cabinet issued a statement that says, “The council examined the measures to be taken by competent authorities, including the group entitled to reclaim Iraqi funds, to monitor accounts in Iraqi Kurdistan as well as accounts of officials there whose accounts receive deposits of funds for exported oil.” The statement says the public prosecutor would prosecute all state employees in Iraqi Kurdistan who held the referendum and the subsequent measures in violation of the ruling by the federal court.

Kurdish authorities called for dialogue in a calm tone, implying that it may be possible to make concessions to Baghdad on some controversial issues. Najmiddin Karim, the governor of Kirkuk who was dismissed by the Iraqi parliament Sept. 14, said Oct. 3 that Kurds are ready for dialogue with Baghdad. He added that results of the independence referendum are not the main component in the fate of the province. The presidency of Iraqi Kurdistan even expressed its backing of suggested initiatives to resolve the issue. Initiatives include one proposed by the supreme Shiite cleric in Najaf, Grand Ayatollah Ali al-Sistani, who called upon Baghdad and Erbil to give due deference to the constitution to solve the differences among them. The initiative stresses supporting the unity of Iraq and opposing any separatist effort.

When it comes to the conflict between Erbil and Baghdad, an international and regional consensus and intelligent and quiet steps by Abadi seem to have given Baghdad the upper hand. Kurdish authorities, on the other hand, have not found a comprehensive consensus in favor of separation and against Baghdad’s punitive measures.

Referendum results showed that voter participation in some of the main cities such as Sulaimaniyah and Halabja did not exceed 55%, while a relatively large number of voters — including, for example, 22% in Halabja — voted against independence. Overall, more than 72% of the 3.3 million registered to vote turned out.

Kurdish opposition parties — which oppose Barzani, whose presidential term has expired — stood with Abadi on his measures against Iraqi Kurdistan authorities. Sarwa Abdel Wahid, head of the Movement for Change (Gorran) parliamentary bloc, said Sept. 27, “Abadi dealt with the [Kurdish] crisis in a patriotic manner. He acts as a man of state.” Abdel Wahid said that Abadi, through these measures, does not want to target the Kurdish people but rather the Iraqi Kurdistan officials who caused the crisis. She called upon Abadi to expel companies affiliated with Barzani from state institutions in Iraqi Kurdistan and to halt their activities with state ministries. She said the Barzani family owns many companies that implement projects with a number of ministries and governmental institutions in the Kurdistan Region.

Gorran also condemned on Oct. 2 the formation by Barzani of the “Political Leadership of Kurdistan-Iraq," which replaced the Referendum Council and some considered a step toward dictatorship, given that its members were not elected or appointed by parliament. Gorran released a statement that says: “The time was not appropriate for the referendum, and it was organized at this particular time to help [the Kurdistan government] evade having to solve outstanding problems.” The statement was making reference to the suspension of the Kurdistan parliament and Barzani's insistence on staying in power even after his presidency ended.

In a statement Oct. 2, the Kurdistan Islamic Group also criticizes Barzani, saying: “Before holding the referendum, the authorities promised the people of Kurdistan that they will march toward statehood and that the referendum is their first step. Therefore, everyone was waiting for the step after the referendum to restore the prestige and status of the official institutions in the Kurdistan Region and work on holding elections. But instead of that, the Referendum Council was changed to the Political Leadership of Kurdistan-Iraq, which is an illegitimate [institution]."

Hero Ibrahim Ahmed, a senior politician in the Patriotic Union of Kurdistan (PUK), also issued a statement against the recently held referendum, saying: “Despite the fact that the world's great powers, the United Nations and neighboring countries asked us to postpone the referendum because of the inappropriate circumstances, the Kurdistan political leadership (including myself) did not respond to those calls and challenged the whole world and conducted the referendum. … Now, our people are paying the tax of this stubbornness. So instead of evaluating ourselves and assessing the current situation in a realistic and precise manner, [a new, unconstitutional institution] Political Leadership of Kurdistan was formed, which is illegitimate.”

The latest trend adopted by some Kurdish leaders to form Iraqi political entities rather than only Kurdish entities shows that Barzani’s plan to find a national Kurdish front in favor of independence has failed. On Oct. 2, Barham Salih, a veteran leader in the PUK, announced the formation of the Coalition for Democracy and Justice to present a drastic solution for all of Iraq — “Basra, Samawah, Baghdad, Mosul, Ramadi, Erbil and Sulaimaniyah” — to save the people from “state mismanagement, wars, corruption and breach of the constitution and law."