Israeli IT companies have started contracting Gazan engineers to work on projects in a move that will not please Hamas but could improve Gaza's economy. 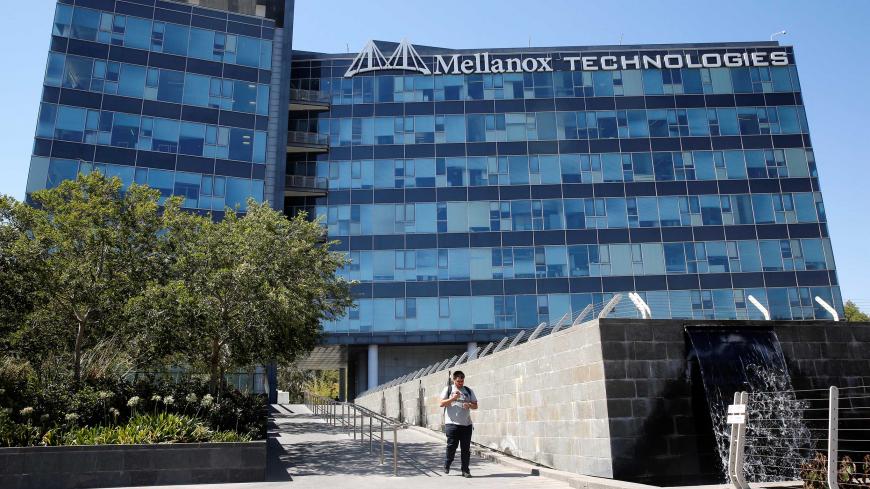 The logo of Mellanox Technologies is seen on the company's headquarters in Yokneam, in northern Israel, July 26, 2016. - REUTERS/Ronen Zvulun

GAZA CITY, Gaza Strip — Palestinians are increasingly joining the programming and information technology (IT) sector, one of the fastest-growing business sectors in the Palestinian economy. Statistics issued by PalTrade in 2016 showed that the annual growth rate of the information and communications technology (ICT) sector is 25% with a market share estimated at $500 million in the West Bank and the Gaza Strip.

Meanwhile, a Sept. 20 report by the Times of Israel cited the French news agency AFP as saying that Israeli tech giant Mellanox — which makes technology that connects computers, databases and servers — employs 10 workers in a Gazan programming company. AFP chose not to name the company for security reasons. Those 10 people work for both companies.

Hamas fears that the Israeli intelligence service would exploit the Palestinians' need for work and lure them into collaboration through fraud, extortion and intimidation.

A number of programming companies in the West Bank, most notably ASAL Technologies, which is based in Rawabi, have been working with the Israeli side in the field of IT since 2012. According to Reuters, about 70 engineers from the West Bank are working with Israeli companies.

Yasser al-Bayouk, an electronic expert and the representative of Alfa Net wireless internet service provider in southern Gaza, told Al-Monitor, “The Israeli companies’ contracting of programmers from Gaza comes as part of Israel's efforts to take advantage of the Gazan human and IT resources. The Gaza Strip is home to a distinguished elite of the most important programming and IT engineers across the country. These engineers have a high level of expertise. The Israeli blockade of Gaza in mid-2007 somehow led many students to major in programming and digital technology, implement individual projects and make individual achievements that earned awards from international institutions.”

Meanwhile, an official source in the Hamas government in Gaza told Al-Monitor on condition of anonymity, “The competent authorities in the government do not know about this business between the Israeli programming companies and Palestinian companies from Gaza.”

The source stressed, “The Israeli side is trying to promote such reports to put the Hamas government in Gaza in a weak position given that it prohibits any commercial activity between Palestinian companies from Gaza and Israeli companies. This would make it seem like Israel achieved a breakthrough in creating a working environment between Gazan and Israeli companies.”

Hassan al-Madhoun, the managing director of the Engineers Syndicate in Gaza, told Al-Monitor, “There are more than 12,000 engineers in the Gaza Strip, including 5,000 ICT engineers, while about 800 telecommunications engineers graduate yearly from four universities in Gaza.”

He added, “There are about 250 IT companies operating in Palestine, about 130 of which are located in the Gaza Strip and employ about 2,800 software engineers. However, the unemployment rate in the Department of Telecommunications Engineering is about 44%.”

Bahaeddine al-Aawaj, the manager of the programming department at Fusion Co., told Al-Monitor, “The opening of the Israeli market to Palestinian companies in Gaza is important for the IT and programming sector in the Gaza Strip. The Israeli IT sector ranked second in the world, and workers in this sector earn high wages at a time when there are thousands of unemployed Gazans in this field. In other words, such contracts will reduce the unemployment rate and increase the engineering experience in this field regardless of the Israeli political position.”

Aawaj added, “It does not make sense for Israeli companies to look for software engineers in India and South Korea at a time when there are a lot of engineers in Gaza who are fully prepared to work in this field in the event that political conditions improve. Therefore, such contracts would play out in favor of the Gazan economy in the medium term.”

Ending the internal division between the West Bank and the Gaza Strip would allow talks about a political settlement between the Palestinian Authority and Israel, which stopped in 2014, to continue.

Maher Tabbaa, the director of media and public relations at the Gaza Chamber of Commerce and Industry and the executive manager of the Palestinian Smart Soft company, told Al-Monitor, “Programming and IT engineering in Gaza is one of the economic sectors that have been marginalized the most by government agencies since the establishment of the Palestinian Authority in 1993. This is due to the Palestinian government's focus on traditional activities such as the agricultural and industrial sectors out of its belief that such sectors keep the wheel of the Gazan economy moving.

Tabbaa added, “Both the Chamber of Commerce and Industry of Gaza governorate and representatives of the private sector have been calling on government agencies since 1993 to develop programs aimed at financing digital infrastructure projects in Gaza so that programmers and engineers could work in an appropriate environment without being forced to work with Israeli programming companies that would seek to exploit their need for work in order to make financial gains worth hundreds of millions of dollars annually.”

It is still too early to gauge the economic gains that Israeli companies would make out of contracting Gazan programmers and whether the Hamas government would allow such contracts to develop in the future.