Amid the rejection of the two main parties, opposition parties in the Kurdistan Region are calling for a so-called government of national salvation. 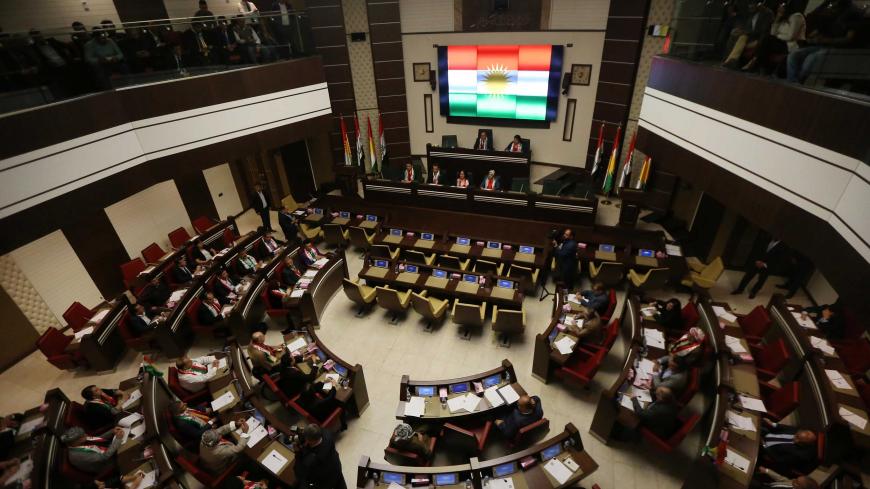 Two days later, the head of the Coalition for Democracy and Justice, Barham Salih, surprisingly presented a proposal to form a transitional government “capable of overcoming the problems resulting from the referendum, one that is legitimate, earns the confidence of the Kurdish citizens and conducts dialogue with Baghdad.”

After the Kurdistan parliament met Oct. 24, the parliament’s term was extended for eight more months until the general elections are held. Amid widespread opposition to this extension, the Coalition for Democracy and Justice, the Movement for Change and the Kurdistan Islamic Group called for dismantling Kurdistan’s presidential institution and forming a provisional government through the parliament. In their statement, the parties suggested “a road map to confront the crises, preserve the achieved gains, correct the course of the political process and normalize the situation in Tuz Khormato, Kirkuk, Khanaqin and the other disputed areas.”

This comes at a time when Iraqi Kurdistan President Massoud Barzani announced Oct. 29 that he is resigning Nov. 1, distributing his authorities between the parliament, the prime minister and the judiciary system. Soon after Barzani's announcement, several offices of the Kurdish opposition parties, namely the Patriotic Union of Kurdistan (PUK) and the Movement for Change, were attacked by pro-Barzani groups. In addition, some parliamentarians from the opposition parties were attacked in the parliament by angry protesters.

This Kurdish political action coincided with the outbreak of fierce battles Oct. 26 between peshmerga forces and Iraqi forces on the border of the part of Kurdistan Region that is under influence of Barzani's Kurdistan Democratic Party (KDP).

Meanwhile, Prime Minister Haider al-Abadi said from Tehran, “The nullification of the referendum held in the Kurdistan Region of Iraq as well as the commitment to the constitution” are two essential conditions for the resumption of dialogue between Baghdad and Erbil.

Abadi’s visit to Tehran followed a visit to Turkey on Oct. 24 that, according to Reuters, was aimed at developing bilateral relations and maintaining the unity of Iraq by controlling KRG border points in cooperation with Iran and Turkey.

Asked about the feasibility of the interim government, Mohamed Ali, the head of the political chamber in the Movement for Change, told Al-Monitor, “The KRG has proved its failure on more levels than one, but it can still assume its responsibility and resign.”

Without mentioning the obstacles facing this project, he said, “Once the government resigns, we could then discuss the ways and means of forming a government of national salvation, this being the best way to get out of the current phase and start a dialogue with Baghdad.”

Abdullah added, “It is time to hand over this government to a new leadership capable of paving the way for free and fair elections all the while engaging in a dialogue with Baghdad.”

Shwan Rabar, the rapporteur of the Kurdistan Islamic Group leadership council, told Al-Monitor, “It is true that this situation needs a government of national salvation to lead this phase, but such an act needs the approval of the KDP and the PUK as well as the support of foreign parties.”

In the same context, Hawjin Omar, a member of the board of the Kurdistan Islamic Group, told Al-Monitor that the goal of a government of national salvation “would be to promote the institutions of Kurdistan again, start dialogue with Baghdad and prepare for the upcoming elections.”

But the problem of the opposition parties is their inability to withdraw from the current government amid a lack of a clear vision about the mechanism of action of a government of national salvation that they are calling for.

The spokesman for the KDP, Hoshyar Siwayli, told Al-Monitor, “The five main political parties in Iraqi Kurdistan are part of the KRG, including the Movement for Change, but they have not yet withdrawn from the Cabinet. The best way to move forward is to develop a program for the next eight months to meet the current challenges.”

While the official position of the PUK is to reject the idea of forming a government of national salvation, leading party member Farid Asasard told Al-Monitor, “The union has not yet taken a position on the transitional government. And parties have to sit together. If a transition government is a good step [toward solving the current problems], then the opposite infers the continuation of the crisis. My personal opinion is that the current government should resign because otherwise it may be one of the reasons behind the Iraqi government's reluctance to engage in a dialogue with the region.”

Aram Rifaat, a veteran professor at Uttara University in Malaysia and an expert focusing on Iraqi affairs, told Al-Monitor, “Even if a government of national salvation is formed, its chances of success would be very weak in the absence of a nonpartisan national military affiliated with the said government in Kurdistan. Also a weak government cannot engage in a dialogue with Baghdad because the core of the Kurdish demands is the areas cut off from Kurdistan, and when the government of Iraq was at its weakest, it did not implement Article 140 of the constitution — let alone right now, when it is at its strongest.”

However, developments show that the ongoing political dispersion in Kurdistan and the lack of consensus on any mechanism to face the post-referendum phase and its recent repercussions may put Erbil in a weak position in any future dialogue with Baghdad.