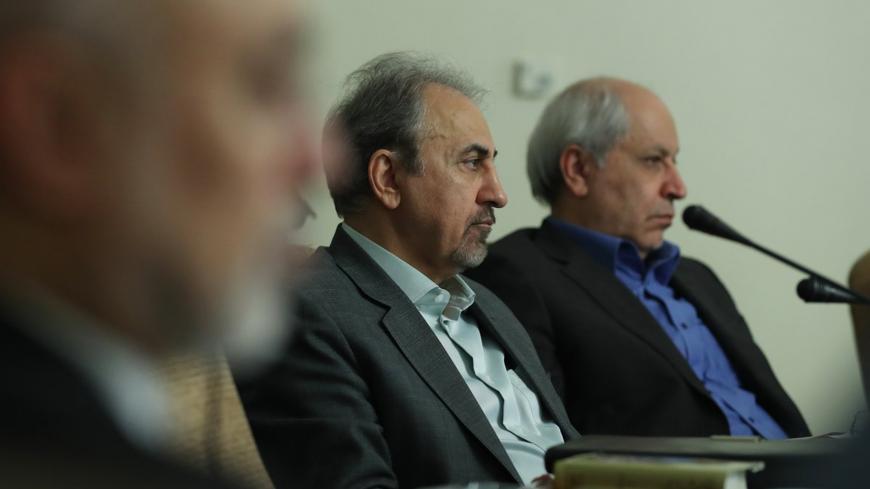 Less than two months into his tenure as the new mayor of Tehran, Mohammad Ali Najafi is already facing serious challenges. The Reformist politician took over the reins from conservative Mohammad Bagher Ghalibaf, who held the post for 12 years (2005-2017). Ghalibaf’s mayorship came to an end in late August, but managers loyal to him at the Tehran municipality seem to be refusing to take new orders and have thus made the situation somewhat difficult for his successor.

After much back and forth, Najafi formally took office Aug. 27 upon the decree of Interior Minister Abdolreza Rahmani Fazli. The former education minister was unanimously elected to the post by the Reformist-dominated Tehran City Council following the May 19 village and city council elections, which were held in parallel with the presidential election.

The declining financial situation in the municipality made headlines even before Najafi took office. According to some media outlets, the municipality did not even have the ability to pay the salaries of its employees. As a first major step to rectify the situation, Najafi ordered on Sept. 25 an immediate suspension of the practice of issuing so-called holograms to contractors as a way of settling municipality debts. Anyone who violated this directive was to be dismissed from the municipality.

The hologram system, created by Ghalibaf and his team, is a type of credit that the municipality had awarded to contractors to settle its increasing debts. The practice involved selling licenses to builders, allowing them to construct trade or residential units that were over or above the lawful limits imposed by national regulations. The builders would then pay any fines associated with these constructions through the hologram system — a practice that had greatly increased in recent years.

Selling licenses was only one part of the hologram system, and it allowed contractors to continue their activities in any area where the municipality was in charge of issuing permits.

While attending Firefighters Day ceremonies on Sept. 26, Najafi touched on some of the financial problems the municipality was facing and said, “We are aware that the budget allocated to the fire department is small. However, at the moment, we are facing serious financial limitations and are not able to increase the budget for this department. Right now, we have a 90 trillion rial [$2.63 billion] debt to contractors who have already completed and submitted their projects.” Many of these growing debts were due to the use of the abovementioned and unaccounted-for holograms.

The day before, Najafi had announced that the municipality’s total debt was much higher than this, standing at 300 trillion rials (about $8.79 billion). This is while last year, the Tehran City Council had approved a budget of 130 trillion rials (about $3.81 billion) for the current Iranian year, which began on March 21. Najafi also pointed to the satisfaction of city dwellers and said, “According to an opinion poll by the Ministry of Culture and Islamic Guidance, the municipality scored nine out of 20 in terms of people’s satisfaction. This shows there are problems. On the other hand, I have said that a manager without a plan is a manager without a report card. We have now realized the need for change in the municipality’s management. The methods and management practices that have so far been adopted in Tehran are no longer sufficient for meeting the needs of this city.”

Meanwhile, Iran’s Principlist movement has been very critical of Najafi’s performance. On Aug. 29, two days after his formal endorsement by the interior minister, the hard-line daily Vatan-e-Emrooz warned Najafi about changing managers by what it called “bus loads” and referred to the changes made at Hamshahri, the most popular newspaper in Iran — which is published by the municipality — as an example.

On Sept. 6, Mashregh, another influential conservative outlet, unleashed a wave of criticism at Najafi’s appointments, saying an elderly home was being established at the municipality, hinting at the ages of the appointees.

On Sept. 12, Alef, the key outlet for Iran’s moderate Principlists, pointed to Najafi’s mayoral appointments for Tehran’s 22 districts while describing his choices as being full of problems, lacking the necessary executive background and being old in age.

At the same time, Najafi’s orders have not been welcomed by the internal structure of the municipality. Entekhab, a website close to Tehran City Council head Mohsen Hashemi, wrote on Oct. 2, “Najafi is facing the serious problem of autonomy in the municipality. His ultimatum to suspend the issuing of holograms is also a major ultimatum to those managers who are still living in the Ghalibaf era.”

However, it seems Najafi’s work is much more difficult than this. In a Sept. 27 decree, the Tehran mayor strictly emphasized that all nontransparent financial and technical dealings be halted and any agreement that does not have the signature of the district mayor himself be considered null and void. This measure would ultimately limit Ghalibaf-era managers from adopting any unilateral measures. Despite Najafi’s efforts to create financial transparency and end any behind-the-scenes corruption or rentierism, changing the middle structure or the general approach of a municipality, which had 135,000 employees under Ghalibaf, is proving to be very difficult.

As such, given that Najafi not only has to address a plethora of current challenges but also the debts accumulated during Ghalibaf’s time in office, it is clear that he faces a tough road ahead.