Iran’s pressure on Kurds could backfire

Having spent major energy on trying to prevent the independence referendum in Iraqi Kurdistan, Iran should be cautious about its next step toward Erbil. 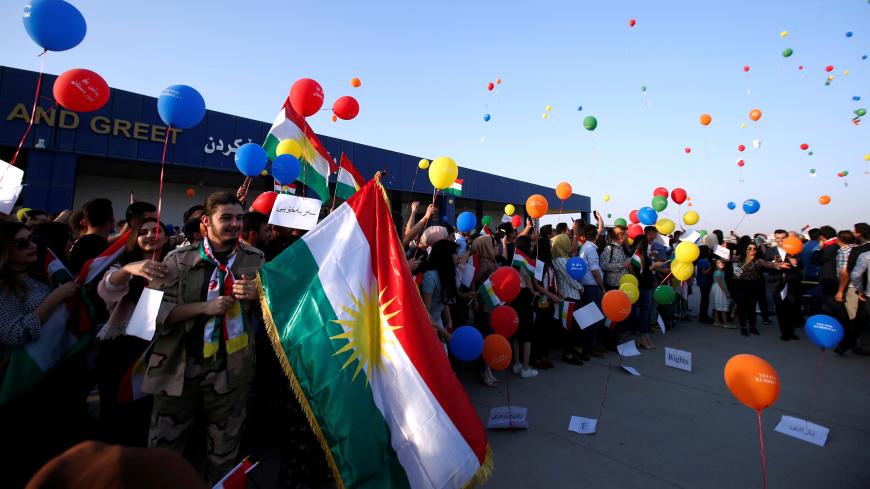 Iran devoted enormous energy to try to prevent Iraqi Kurds from holding their Sept. 25 independence referendum, accusing the Kurdish leadership of recklessness and endangering the stability of the region. Having failed in that endeavor, officials in Tehran are now at a loss as to what punitive measures they can realistically take to punish the Kurds without causing further instability on their doorstep.

As the pressure mounts on Iraqi Kurds following the plebiscite in which nearly 93% of voters cast ballots in favor of seceding from Iraq, Iran as a historical ally of the Iraqi Kurds appears to be hesitant to take extreme measures against its western neighbor, fearing further instability that could easily spill over into Iran's own Kurdish areas. Nonetheless, Tehran has taken some half measures against the Iraqi Kurds, seemingly mainly for domestic consumption.

Tehran imposed fuel sanctions on Sept. 30, flights from Iran to the two main airports in Iraqi Kurdistan have been suspended and the Iranian armed forces are engaged in joint drills with the Iraqi military on the Iraqi Kurdish border. Iranian officials have also met with their Turkish and Iraqi counterparts to reportedly take some joint measures against the Kurdish administration in northern Iraq.

But Iran cannot afford to alienate the Iraqi Kurds, who are currently an important security, political and trade partner and a historical ally of Tehran. “Historically, Iran has had better relations with the Kurds than other countries,” said Ebrahim Rahimpour, the Iranian deputy foreign minister for Asian and Pacific Affairs. “We hope that they stop at this referendum and demonstration of people’s sentiments.” Rahimpour implies that Tehran can live with the referendum if the Kurds do not take further steps toward independence, and he believes that the pace of events is so fast that it is difficult for Tehran to predict what is going to happen.

The Iranian parliament’s national security and foreign policy commission held an extraordinary session Sept. 27 behind closed doors to discuss the Kurdistan referendum. Representatives of the Foreign Ministry, Intelligence Ministry, Quds Force were present, as was Ali Shamkhani, the secretary of the Supreme National Security Council. “Iran does not recognize the referendum for Kurdistan independence, and he [Shamkhani] discussed the territorial integrity of Iraq and mentioned measures that should be taken by our country and regionally,” said Behrouz Nemati, the spokesman for parliament’s presiding board. Nemati also attended the meeting. “However, our measures are mostly dialogue oriented … there are problems with trade and exporting oil from the Kurdish areas, and we believe it should be resolved through diplomacy,” Nemati said.

For decades, Iran has propped up regional alliances and proxy forces to do its bidding outside its borders; Islamic Revolutionary Guards Corps commanders often boast about the level of security that exists in Iran as one of their biggest achievements. The last thing Iran wants, given the American presence in Iraq, is a security threat from thousands of Iranian Kurdish peshmerga forces stationed on its western border that could be used by the United States and other regional foes against Tehran. The referendum in Iraqi Kurdistan created a wave of demonstrations and celebrations across the Kurdish region in Iran that caused alarm in Tehran, which deployed thousands more troops to keep the area peaceful. “Qassemlou Qassemlou, your path will continue,” shouted a crowd in the city of Sanandaj in Kurdistan province, referring to the secretary-general of the Kurdistan Democratic Party of Iran who was assassinated by Iranian agents in Vienna in 1989. Iran fought a bloody war against Kurdish peshmerga forces in the 1980s, and Iranian officials realize the potential for unrest in the country’s Kurdish region. Despite arresting a large number of Kurds who participated in the demonstrations, Iranian security services were careful not to kill any protesters. "Two-thirds of the army was bogged down in Kurdistan," said Maj. Gen. Hussein Hassani Sadi on Sept. 24, referring to the nascent Islamic Republic’s conflict with Kurdish militants in the 1980s.

The regional dynamics and the suspicion with which Iran sees the Turkish role in Iraq and in the region also play crucial roles in the way Iranian officials calculate their policies. Tehran has helped its main ally, Syrian President Bashar al-Assad, to survive six years of civil war despite the best efforts of Turkey, the West and the Sunni Arab world to oust him. On top of Hezbollah in Lebanon, an indispensable regional ally, Iran has three more important relationships: the Houthis of Yemen, the militias in Syria and the Popular Mobilization Units in Iraq — most of whom are loyal to Tehran. Iran is in a strong position in the region and does not need to be involved in another conflict.

Despite rhetoric of mutual cooperation against the Kurds by Tehran and Ankara, the two countries have a history of suspicion and betrayal. In the 1980s, Turkey indirectly assisted the Saddam Hussein regime against Iran by allowing large quantities of oil to be exported from Kirkuk to Ceyhan and from there to the international market, allowing Saddam to buy more weapons to fight the Iranians. In the 1990s, Turkey and Iran were in a bitter rivalry during the Kurdish civil war, during which Turkey established several military bases in the Iraqi Kurdish region, increasing its influence with the Massoud Barzani's Kurdistan Democratic Party, the main ruling party in Iraqi Kurdistan.

As such, any unnecessary economic or security pressure on the Kurds could backfire on Tehran. It would likely alienate the Kurdish public — who backed the referendum overwhelmingly — and also jeopardize Tehran’s influence with its main ally in the Iraqi Kurdish region, the Patriotic Union of Kurdistan.