Turkey claims 'no need' for US, EU as Western ties deteriorate

After a week of sparring with the United States, Turkish President Recep Tayyip Erdogan has accused European allies of undermining Turkey and dared them to walk away from EU membership talks. 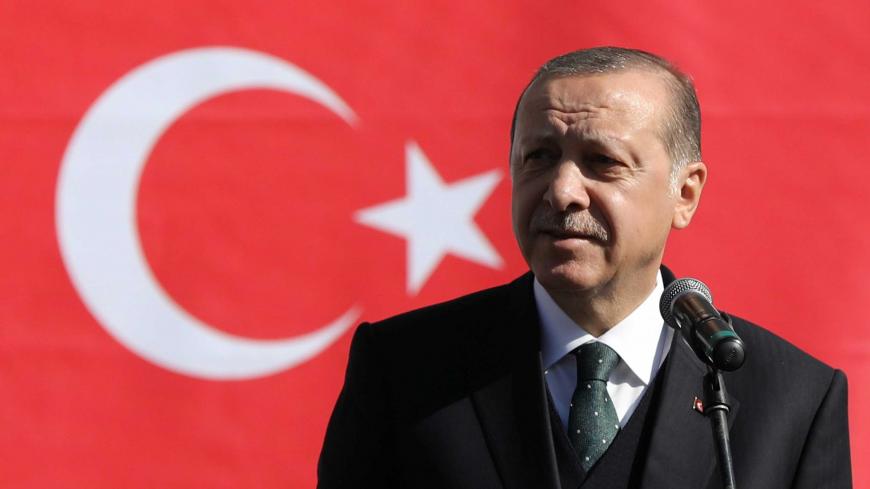 Turkish President Recep Tayyip Erdogan looks on as he stands next to Serbia's President Aleksandar Vucic (not pictured) during their visit to Novi Pazar, Serbia, Oct. 11, 2017. - REUTERS/Marko Djurica

Even as tensions with the United States continue to churn, Turkey has turned its ire on European partners, with President Recep Tayyip Erdogan accusing Brussels of double-dealing and daring it to unilaterally end Turkey’s decadeslong membership bid ahead of a summit this week.

Relations with the United States hit a nadir after Washington suspended non-immigration visas in Turkey on Oct. 8 following the arrest of a second consular employee. Turkey responded in kind, and Erdogan spent much of last week blasting Washington. “We are not beholden to you,” he thundered.

Then Erdogan lashed out at the European Union, which Turkey has long hoped to join, angry that he is hit with “a new assault every day.” Erdogan accused both the EU and the United States of speculative attacks on Turkey’s economy and using Kurdish militants to undermine the country in an address of provincial leaders of the ruling Justice and Development Party (AKP) on Oct. 13.

“Those who are unable to bring Turkey to its knees politically, socially and diplomatically appear before us with a new game,” he said. “Europe continues to stall, but we remain patient. You will be the ones to leave the table, not us. If you are honest, make your statement and let’s finish this. We have no need for you,” he said, going on to add that the need must be mutual.

Indeed, Europe is Turkey’s biggest source of direct investment and its main trading partner. US and European aircraft use Turkish air bases to fight the Islamic State, and Turkey’s army, the second-largest in NATO, was long a bulwark against Iranian and Russian influence.

But Western capitals have questioned Turkey’s loyalty as its foreign policy, especially on Syria, appears to align more closely with Moscow and Tehran’s, as well as its commitment to human rights amid a clampdown on civil society in the wake of a failed coup last year. For its part, Turkey is fuming over US support for Kurdish rebels in Syria, widely seen as linked to militants who have waged war against Turkey.

“From a cultural and political standpoint, Erdogan thinks the EU and the US are detrimental to his long-term ambitions,” Aaron Stein, a senior fellow at the Atlantic Council, told Al-Monitor. “He’s also in a rhetorical cul-de-sac [in which] it is easier to deflect attention from his own faults if it appears the international community is against him.”

Erdogan’s taunting comes ahead of this week’s EU summit, at which European leaders are expected to discuss the strained relationship. Germany, the EU’s biggest member with the most clout, is outraged over the detentions of at least 11 of its citizens for “political reasons,” including two journalists and a human rights activist, in Turkey’s post-coup crackdown, and Chancellor Angela Merkel said last month membership talks with Turkey should end.

The Turkish leader may also be trying to sway party members uneasy with an overhaul of the AKP ahead of the 2019 elections or the post-coup crackdown that has persisted for 15 months to close ranks.

“Turkey’s foreign policy is viewed as a resource to address the needs of domestic policy,” Ilter Turan, professor emeritus of international relations at Bilgi University in Istanbul, told Al-Monitor. Pointing out grievances abroad, he said, “puts the strife he is leading inside on the back burner. It can be assessed as an uncomplicated political tactic.”

In a sign of conciliation, a US State Department delegation is due to hold talks in Ankara Oct. 17. Deputy Prime Minister Bekir Bozdag said Oct. 15, “Turkey has no intention of withdrawing from the [EU] process,” which Ankara formally began in 2005 but has concluded only one of 31 negotiating chapters.

But in his speech, Erdogan revived criticism of the EU for failing to honor its pledge to scrap visas for Turks and deliver a full 6 billion euros ($7 billion) of financial aid in exchange for Turkey stemming irregular migration flows to Europe.

Erdogan also said that Europe and the United States were seeking to divert Turkey’s focus and energy away from regional matters, perhaps a reference to his military’s latest incursion into northern Syria, agreed upon with Iran and Russia, Turkish adversaries for centuries.

Despite a half-dozen high-profile meetings, Erdogan and his Russian counterpart Vladimir Putin remain at odds over agricultural exports and a missile defense system Ankara wants from Moscow. Confusion persists about whether Turkey, an outspoken critic of the Syrian government, could switch sides.

“If the EU is a goal for Turkey, that entire policy has collapsed. If managing relations with the United States is a goal, that too has collapsed," said Stein. "If you peel back the facade with Putin, you have disputes. Erdogan has run Turkish foreign policy into the ground. I have never seen Turkey this isolated.”