How Egypt’s opposition is countering Sisi ahead of presidential vote

The sentence issued against Egyptian lawyer Khaled Ali, who intends to run in the 2018 presidential elections, comes after opposition factions announced the launch of talks to agree on a consensual candidate to run against President Abdel Fattah al-Sisi. 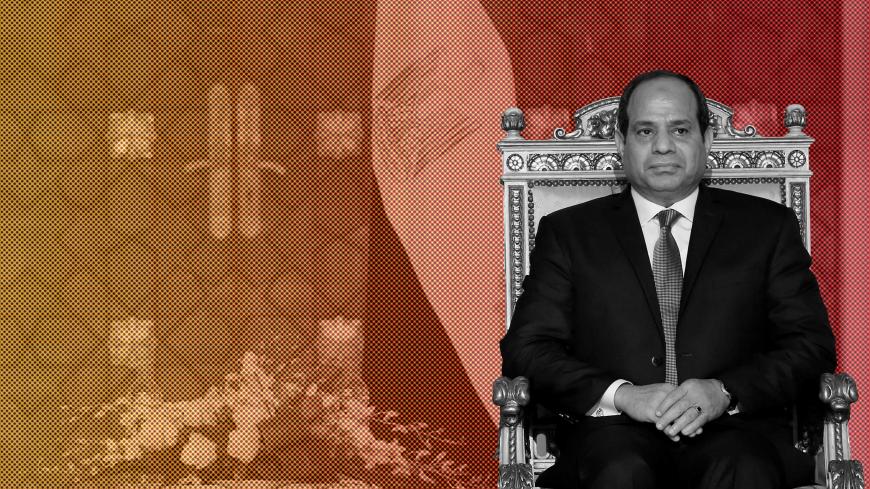 CAIRO — An Egyptian court of misdemeanors in the Giza governorate sentenced on Sept. 25 prominent human rights lawyer and potential presidential candidate Khalid Ali to three months in prison after being found guilty of offending public decency.

Ali swiftly responded, saying the case was fabricated. Following the sentence, he wrote on his Facebook page, “When we addressed the Egyptian issue of Tiran and Sanafir, we knew we would have to pay for it.”

Ali became well known after he succeeded on Jan. 16 in obtaining a ruling that nullifies the agreement ceding sovereignty over the Red Sea islands of Tiran and Sanafir to Saudi Arabia. However, the transfer was later approved by parliament in June of this year.

“The ruling completely ignored the defense; the lawyers were allowed to present neither arguments nor technical reports to prove video manipulation,” said Ali, noting that he will challenge the ruling issued against him after the release of a video in which he appears to be making a hand gesture deemed offensive to public decency. The video was originally taken following the issuance of the Tiran and Sanafir verdict, as Ali was celebrating with a crowd of his supporters who carried him on their shoulders.

In this context, Amnesty International said in a Sept. 25 report that Ali's conviction was politically motivated as he is considered the top contender of President Abdel Fattah al-Sisi for the 2018 presidential elections.

Ali had hinted at his intentions to run for office in an interview with Reuters on June 7.

This ruling “is a clear signal that the Egyptian authorities are intent on eliminating any rival who could stand in the way of President Abdel Fattah al-Sisi’s victory in next year’s elections. It also illustrates the government’s ruthless determination to crush dissent to consolidate its power,” the Amnesty statement read.

According to law experts, if Ali is convicted in a final judgment for a dishonorable crime, he will be prevented from exercising his political rights; he cannot run for parliamentary, presidential or other public office in accordance with the Egyptian Penal Code.

Hamdeen Sabahi, the founder of the Egyptian Popular Current and a former presidential candidate, announced during an interview with BBC's program "Bila Kouyoud" ("No Restrictions”) on Sept. 10 that there was ongoing dialogue between political factions to agree on a candidate to go against Sisi.

The Strong Egypt Party, led by former presidential candidate Abdel Moneim Aboul Fotouh, announced Sept. 25 its support for “any efforts to build a national assembly of true opposition forces and public political figures from various affiliations to work on … confronting the current regime’s policies of corruption and tyranny.”

Aboul Fotouh expressed his solidarity with Ali in a Sept. 26 tweet, writing, “We are all witnessing the remarkable performance of Khaled Ali in defending the islands of Tiran and Sanafir, so we are not surprised that he is being punished.”

Sisi, a former army commander, is widely believed to be seeking a second term and running for office next year.

Masom Marzouk, a former assistant foreign minister, said that an opposition front will be announced within the next few days and will include many parties of the democratic current and various public figures.

Marzouk told Al-Monitor over the phone that the opposition is considering suggesting a presidential candidate but it is yet to agree on a name, and that it hasn’t been able to reach a final decision on whether or not to take part in the next elections.

Marzouk said, “Announcing the opposition front will only be the starting point. We seek to form a popular base as we try to develop a flexible formula for consensus in order to save Egypt. We will submit dossiers and a comprehensive program of public opinion clarifying and rectifying the situation of education, health, social justice and transitional justice, as well as reconciliation, administrative reform, refining laws, restoring Tiran and Sanafir, and reorienting the foreign compass in order to ensure Egypt's position and independence.”

He pointed out that coordination within the opposition is in its final stages, after which a unified vision will be presented to the citizens.

Marzouk also noted the pressure and security threats facing the opposition, explaining that the Egyptian media is controlled by the regime and does not allow different opinions, But he said they are “prepared to confront this as a national duty” of theirs.

Amnesty International said May 24 that the Egyptian authorities had intensified their crackdown on opposition activists ahead of the upcoming presidential elections and arrested between May 19 and May 23 at least 36 people in 17 provinces who are affiliated with five opposition parties and youth political groups. Many were arrested following comments they had made online regarding the elections.

In the same context, journalist Abdullah al-Sinawi told Al-Monitor over the phone that the current facts do not indicate that the upcoming presidential elections will be fair and democratic, noting that the political atmosphere in Egypt is poisoned.

He believes the absence of fair conditions for the competition between the candidates will ultimately make the elections a formality, with no signs of democracy whatsoever.

Sinawi denounced the regime-affiliated media attacks against the opposition’s political action, stressing the need to open the public domain instead of facing terrifying scenarios.

According to Ammar Ali Hassan, an independent expert in political sociology, the opposition's attempts to meet once again provide an opportunity for political discussions and create an opposing opinion to confront and pressure the current authority.

Speaking to Al-Monitor, Hassan said that the upcoming presidential elections is an opportunity for the opposition to present itself and make a name for itself on the political scene.

Hassan fears the upcoming elections would be restricted and there would not be much room for freedom. This is particularly true since Sisi took it upon himself June 29 to appoint the heads of the judicial bodies, who in turn are selecting the members of the independent High Elections Committee — thus the committee will be biased to the current regime.