As the Islamic State and its affiliates are forced out of Syria and Iraq, their recent bank robbery in North Sinai province indicates they might be turning to targets in Egypt to refill their coffers. 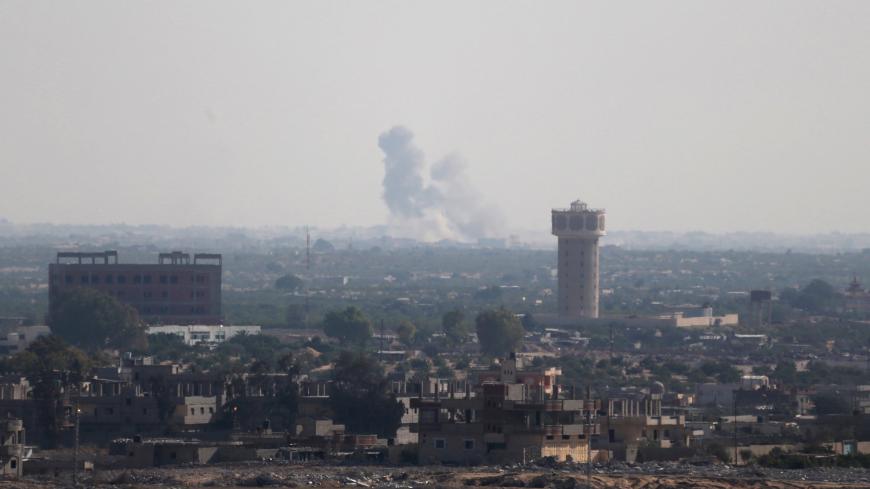 A series of deadly terrorist attacks in Egypt's North Sinai province have citizens fearing even worse violence is to come.

The most recent attack came Oct. 16 in the province's capital, el-Arish, when the Islamic State-affiliated Wilayat Sinai robbed a bank, leaving eight dead and taking $1 million (17 million Egyptian pounds). Among the dead were three policemen and five civilians, including the bank guard. Officials said 16 other people were injured and one person was taken hostage.

Hassan al-Shorbaji, an el-Arish resident, told Al-Monitor he was about 100 yards from the bank. "I was surprised to see masked men holding automatic shotguns," he said. "Some of them were carrying anti-tank [rocket propelled grenade launchers] and standing at the roadside."

The men spread out, firing on nearby security stations at the city council building and an outpost securing St. George Church.

Ahmed al-Kashef, another eyewitness, told Al-Monitor, “People felt fear and panic. Some of them managed to escape while others were stuck inside shops or on roads when the shooting intensified. The masked men controlled the city center for about 40 minutes without security forces intervening or making any attempt to close in on them.”

The bank is near a security zone that is so closely monitored that civilians can barely move around the area without being subjected to strict security measures. This raised questions about how the terrorists managed to control the bank and downtown area for so long, and get away so easily.

A researcher on Sinai and armed groups’ affairs spoke with Al-Monitor on condition of anonymity. He described the operation as the first in a series of potential robberies of financial institutions or shops to fund the Islamic State (IS) and Wilayat Sinai, which are engaged in an ongoing war with the Egyptian army.

He added that Wilayat Sinai is facing a financial crisis and is unable to meet the needs of its soldiers because IS has been dealt heavy blows in Syria and Iraq. IS is also being hurt financially by the Palestinian reconciliation declared Oct. 12 in Cairo.

The researcher said, “Wilayat Sinai received financial support from smuggling merchandise through [Palestinian] tunnels to certain areas in Gaza that support IS ideology. … Hamas interfered and stopped the funding after the reconciliation and rapprochement with Cairo, and tightened security measures on the borders. Hamas also pursued some individuals who were proven to have ties with Wilayat Sinai.”

He noted that the success of the bank robbery will probably make Wilayat Sinai confident enough to launch more operations once it spends the $1 million — which will barely last six months. The group also could branch out to other parts of Egypt and other types of lucrative targets: jewelry stores, money exchange offices and vehicles transporting money between cities or governorates.

But the most dangerous factor, he said, is that Wilayat Sinai does not care about civilians. The group now considers all those who did not pledge allegiance to them “infidels.”

But how did the Wilayat Sinai terrorists succeed in implementing the operation in el-Arish and retreating safely? The researcher answered, “IS always relies on collecting information and good training, unlike the security forces, which follow a military routine that is inconvenient for the circumstances of the war on terrorism, not to mention their sluggishness at times.”

He added, “The security forces in Sinai are unable to review the circumstances the organization is going through so they can put pre-mptive deterrence plans in place for any potential scenarios.”

It appears Wilayat Sinai managed to rob the bank in large part because its militants camouflaged their intentions by shooting at military targets and clashing with soldiers in different areas. Meanwhile, five militants snuck into the bank and killed anyone who might have interfered, then kept shooting to scare civilians and employees and prevent any obstruction.

Although security officials in Sinai did not comment on the incident to the media, some soldiers admitted their fears to eyewitnesses, with whom Al-Monitor spoke, that Wilayat Sinai might have planted bombs on the roads. Residents are wondering why the security forces didn't pursue the militants outside the city as they escaped.

Other recent attacks include the targeting of a checkpoint in Sheikh Zuweid, also in North Sinai, just the day before the bank robbery. At least six security officers were killed. IS claimed responsibility for that attack as well as one Oct. 12, at a military outpost just outside el-Arish, that killed six soldiers.

The situation on the ground in Sinai indicates that the worst is yet to come. Wilayat Sinai seems bent on increasing operations, including those targeting civilian areas and roads in el-Arish, the most populous city in North Sinai, with around 180,000 citizens.