With Trump set to announce a new, hard-line strategy on Iran today, lawmakers are advancing more sanctions on Tehran and its proxies. 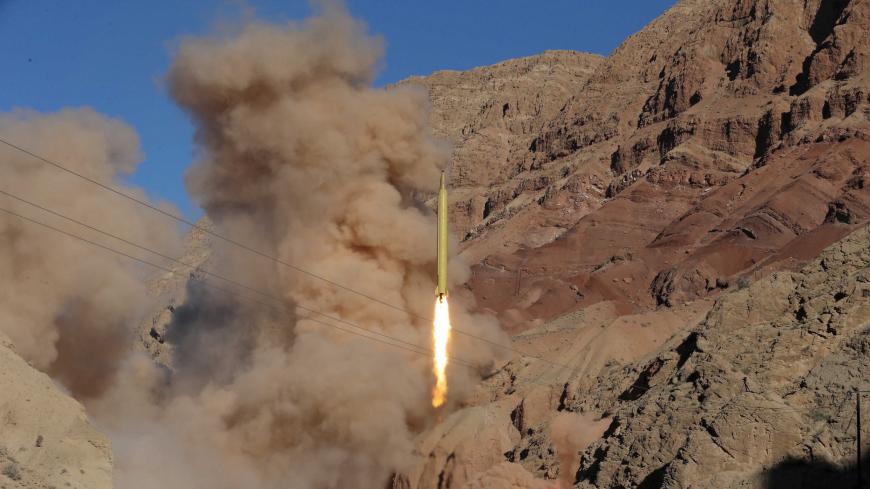 A ballistic missile is launched and tested in an undisclosed location, Iran, March 9, 2016. - REUTERS/Mahmood Hosseini

Congress is pushing for a new round of sanctions on Iran’s ballistic missile program while demanding that the Donald Trump administration implement the sanctions the president signed into law in August.

The House Foreign Affairs Committee moved ahead today with a new round of sanctions on Iran’s ballistic missile program, paving the way for a vote on the House floor. The move comes as Trump is widely expected to announce a hard-line Iran strategy Friday even as he stops short of pulling out of the 2015 Joint Comprehensive Plan of Action (JCPOA).

Rep. Eliot Engel, D-N.Y, the top Democrat on the committee and one of the original co-sponsors to the Iran Ballistic Missiles and Sanctions Enforcement Act, said the new bill was “pretty similar” to the one that became law in August.

However, Kenneth Katzman, an Iran sanctions expert with the Congressional Research Service, noted that Royce’s bill would expand upon the existing law by sanctioning entities with assets outside the US for supporting Iran’s ballistic missile program.

“Those could potentially affect companies who are designated even if they do not have US-based assets,” Katzman told Al-Monitor. “It can affect a foreign company even if that company doesn’t have any US-based property.”

As of this morning, Democrats who support the bill were voicing their frustration that Trump had still not implemented the latest round of Iran sanctions from the Countering America’s Adversaries Through Sanctions Act, which Trump signed into law in August.

Later in the day, however, Trump delegated the authority that the departments of State, Treasury and Homeland Security need to begin implementing the Iran sanctions in the law ahead of the rollout of his new Iran strategy tomorrow.

The House voted earlier this year 419-3 and the Senate 98-2 to pass the Countering America’s Adversaries Through Sanctions Act, which marked the first congressionally mandated sanctions on Iran since the landmark nuclear accord. The law also imposes financial penalties on Russia for its support of the Bashar al-Assad regime in Syria, its invasion of Ukraine and its interference in the US election last year, while also targeting North Korea for its nuclear program.

While the law required the Trump administration to begin implementing most of the sanctions on Russia by Oct. 1, it did not set a timeline for the sanctions on Iran and North Korea. And even though the Trump administration began implementing some of the Russia-related sanctions at the end of September, Sen. Ben Cardin, D-Md., the top Democrat on the Senate Foreign Relations Committee and John McCain, R-Ariz., a frequent Trump critic, issued a statement Wednesday denouncing the administration’s failure to meet the Oct. 1 deadline.

“The delay calls into question the Trump administration’s commitment to the sanctions bill which was signed into law more than two months ago, following months of public debate and negotiations in Congress,” they wrote. “They’ve had plenty of time to get their act together.”

Cardin and McCain had previously penned a letter to the president to “request that the Departments of State and Treasury provide us with a briefing on the administration’s overall implementation plan with respect to Russia.”

Cardin and McCain further wrote that they “also plan to engage your administration separately on the sanctions regimes against Iran and North Korea.” The White House did not respond to Al-Monitor’s inquiry about its timetable for implementation.

Meanwhile, Rep. Ron DeSantis, R-Fla., added an amendment to Royce’s bill during today’s markup that would give the president 60 days to submit a plan for how he plans to implement the sanctions in the Royce bill as well as those from the previously passed bill.

The Trump administration further irritated Engel and other House Democrats by holding a classified briefing on Trump’s new Iran strategy for Royce and a small group of House Republicans. The administration held another classified briefing on Iranian compliance with the deal today and CBS reported that Secretary of State Rex Tillerson is making the rounds on Capitol Hill to brief lawmakers ahead of Trump’s certification decision.