At a time when many economic sectors in Turkey are struggling, the health tourism sector has boomed, attracting hundreds of thousands of foreigners eager to get medical treatment and plastic surgeries for cheap. 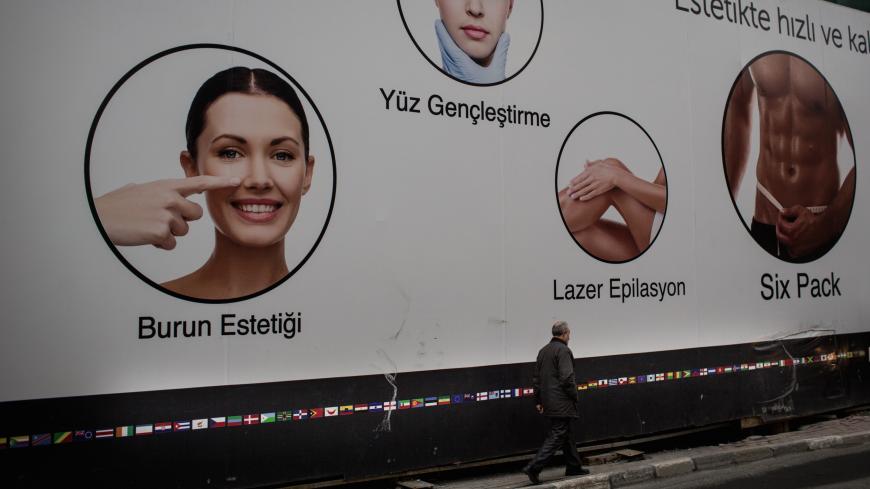 A man walks past a billboard promoting medical treatments at the luxury Esteworld Clinic on Feb. 15, 2017, in Istanbul, Turkey. - GETTY/Chris McGrath

ANKARA, Turkey — The Turkish surgeons’ mastery in giving women “Brazilian butt lifts” has become a new source of hard currency for the Turkish economy. The Realself website offers the list and contacts of Turkey’s 20 most famous plastic surgeons in this realm.

More and more TV stars seem to go under the knife to get the “Brazilian butt lift.” Keen to rectify bodily flaws and feel better, women and men alike are looking for surgical solutions, boosting the health tourism market by the day.

In recent years, Turkey has progressed remarkably in the sector. From hip and breast augmentation, vaginal and penile surgeries, hair transplantation and dental implants to cancer treatment, organ transplantation and gender reassignment surgeries, Turkey is a rising star in the health tourism field. Turkish medical centers offer standards on par with, and sometimes even higher than, their counterparts in Europe and the United States, but they usually bill patients half, and in some cases, a third of what the procedures cost in Western countries. Hence, the growing foreign demand for surgeries in Turkey.

A number of British celebrities from popular TV series and reality shows have made the tabloid headlines after traveling to Turkey for various plastic procedures — from Brazilian butt lifts and lip enhancements to breast and vaginal surgeries. Abi Clarke, Chloe Khan, Chanelle McCleary, Lateysha Grace and Jemma Lucy are some of the popular names that have gone under the knife in Turkey in the past several months alone, paying sums of no more than 45,000 Turkish lira (roughly $13,100).

Though the celebrity makeovers excite interest mostly in the tabloid press, they still contribute to promotion and publicity.

Founded in 2005, the Turkish Healthcare Travel Council (THTC) has grown fast to include 317 members — hospitals, clinics, thermal and medical spa centers, and assistant facilities — as well as 144 network offices in 85 countries, which, it says, makes it the largest health-care association in Turkey and the world. In 2013 at Monte Carlo, the THTC initiated also the creation of the Global Healthcare Travel Council and “cemented its place as a global contender in the healthcare industry,” the THTC website reads.

According to the THTC, 54 private Turkish hospitals — employing some 150,000 health-care professionals, including more than 15,000 physicians — have been accredited by the Joint Commission International (JCI), representing a fifth of all JCI-accredited hospitals in the world.

Cakmak noted that while Europe’s population is aging, many governments have slashed by half the money they allocate for elderly care, which is pushing senior citizens to look for alternative health-care destinations. Turkish health-care entrepreneurs have now turned to investments targeting the elderly segment of Europe’s population, which has reached about 125 million, he said. Pointing to the field of oncology, he added, “Today we have 15 large hospitals above world standards working in the oncology field alone. Thanks to those investments, Turkey is becoming one of the [international] centers of cancer treatment.”

According to figures cited by the THTC president, 746,000 medical tourists traveled to Turkey in 2016, providing revenues of $5.8 billion for the sector. The bulk of the sum — 90% — came from medical treatments and the rest from plastic surgery procedures. In the first half of 2017, the number of medical tourists stood at 359,683, a 7.6% decrease from the same period last year, but revenues were 21.4% up at $3.4 billion. The figure was expected to reach at least $7.5 billion by the end of the year.

While the number of tourists holidaying in Turkey fell sharply last year, those who came for hair transplants, for instance, increased by 4.7%. In 2016, foreigners who traveled to Turkey for hair implants and plastic surgeries alone numbered about 377,000 and paid some $715 million for the procedures.

Dentistry is another area that stands out in the health tourism drive. Bekir Okan, the head of Okan Holding and the board of trustees of Istanbul’s Okan University, said that Turkey is on par with the United States and Europe in this field, and even ahead in some dental procedures. Stressing that the university has invested more than $150 million in its dentistry faculty and affiliated clinics and research hospitals, he told Al-Monitor, “Our technological infrastructure is well above Western standards. We are using the newest technology. People from various countries are coming for treatment to our hospital in Mecidiyekoy [in Istanbul] — not only from the Middle East and Europe, but even from the United States. That is because treatment prices are cheaper than in the West, while the treatments are above Western standards. We intend to offer also accommodation for patients coming for dental implants. … It is a system in which hotels will profit as well.”

A 2016 Health Ministry report, titled “Turkey’s Health Tourism Vision,” describes Turkey as a regional and international heavyweight in health tourism, noting that the World Health Organization commends the development of the sector.

According to Murat Isik, the head of Turkey’s Export Development Center, the country has become the third top destination in health tourism after the United States and Germany. He puts the target at $20 billion in revenues for 2023. The head of the Ankara Chamber of Commerce, Gursel Baran, is even more ambitious, arguing that Turkey has the potential to generate as much as $50 billion per year from health tourism.

Turkey’s health system may be earning billions of dollars from foreign celebrities and the well-to-do, but it often struggles to meet the needs of its own. In one recent incident, a pregnant woman perished along with her unborn baby in the mainly Kurdish town of Cizre in late August because the local state hospital lacked a gynecologist to take care of her ailment and was short on ambulances to send her to a bigger hospital.

No doubt, the headway in health tourism comes as a refreshing development at a time when gloom hovers over many sectors of the Turkish economy. Yet the country’s deteriorating image — tensions at home and abroad and escalating spats with Europe, especially Germany — are threatening to hit this emerging sector as well. Although Russians, Middle Easterners and Central Asians dominate Turkey’s medical tourist portfolio at present, the country seems on track to become a preferred destination for Europeans and Americans, thanks to lower prices and quality services. Yet if Turkey maintains its current political path, it may find itself increasingly isolated internationally, which will bear negatively on the preferences of medical tourists as well.