Trump talks up peace prospects with Netanyahu at UN meeting

The US president made a stirring case for Middle East peace at his UN debut with Netanyahu, but the Israeli leader steered the conversation back to Iran. 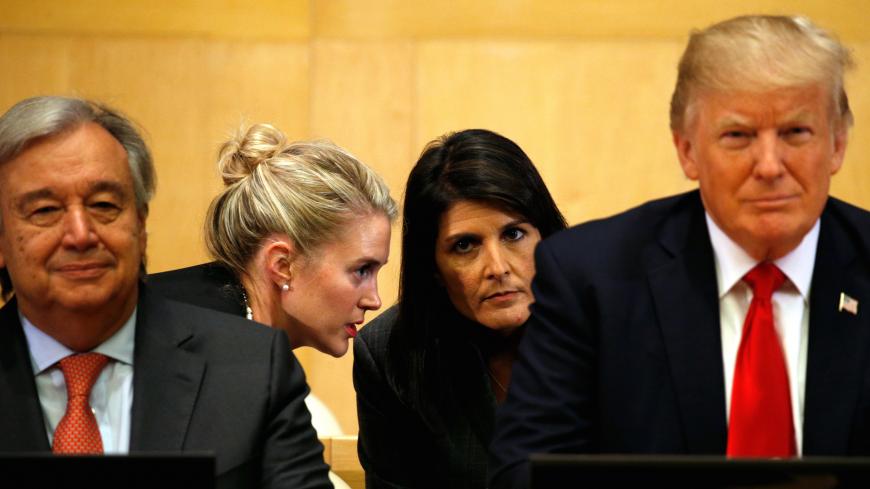 US Ambassador to the UN Nikki Haley (2nd R) receives information, as US President Donald Trump and UN Secretary-General Antonio Guterres participate in a session on reforming the United Nations at UN Headquarters in New York, US, Sept. 18, 2017. - REUTERS/Kevin Lamarque

NEW YORK — US President Donald Trump made a buoyant case for Middle East peace today at the UN, the start of a weeklong opportunity to showcase his vaunted dealmaking skills on the world stage.

Israeli Prime Minister Benjamin Netanyahu, in his first bilateral meeting on the margins of the UN General Assembly, quickly sought to shift the conversation back to the two men’s shared dislike of the nuclear deal with Iran.

“Peace between the Palestinians and Israel — it will be a fantastic achievement,” Trump said. “We are giving it an absolute go. I think there's a good chance that it could happen.”

“I actually think with the capability of Bibi and, frankly, the other side, I really think we have a chance,” Trump added, using a common nickname for the Israeli leader. “So we're working very hard on it. We'll see what happens.”

Netanyahu for his part extolled the strength of US-Israeli relations under Trump’s leadership, giving peace prospects with the Palestinians a backseat to a hard line on Iran.

"I look forward to discussing with you how we can address together what you rightly call is the terrible nuclear deal with Iran and how to roll back Iran's growing aggression in the region, especially in Syria,” Netanyahu said.

As Netanyahu pressed Trump to take a more aggressive stance on Iran, other world leaders were urging the US president not to walk away from the 2015 Joint Comprehensive Plan of Action (JCPOA). French Foreign Minister Jean-Yves Le Drian, speaking ahead of Trump’s meeting with French President Emmanuel Macron this afternoon, stressed that fully implementing the Iran nuclear deal would be critical to stopping nuclear proliferation and maintaining international credibility as the world tries to address other nuclear threats like North Korea.

“It’s essential to maintain it to prevent a spiral of proliferation that would encourage hard-liners in Iran to pursue nuclear weapons,” Le Drian told journalists in New York today. “France will try to persuade President Trump of the importance of this choice.”

Le Drian’s comments highlight how this year’s General Assembly gathering has become a venue for world leaders trying to press Trump to uphold international agreements. The US administration has notably displayed deep ambivalence and internal conflict about the Iran nuclear deal and the Paris climate accords.

Secretary of State Rex Tillerson is expected to have his first encounter with Iranian Foreign Minister Mohammad Javad Zarif Wednesday evening at a meeting of the eight-member Joint Commission overseeing JCPOA implementation in New York. Ahead of that critical encounter, political directors from Iran and the six world powers that negotiated the 2015 deal are scheduled to meet Tuesday afternoon.

The Trump administration last week once again extended sanctions relief to Iran as called for by the nuclear deal. But now an Oct. 15 deadline mandated by Congress looms, requiring Trump to decide whether to certify that Iran is still complying with the deal and that sticking with it is in the US national interest. If Trump opts not to certify, Congress can choose to fast-track the re-imposition of sanctions waived under the deal in exchange for Iran rolling back its nuclear program.

Trump, asked today by a reporter if he planned to stay in the Iran nuclear deal, would not commit either way.

Regardless of how he ends up coming down on the deal, Trump is expected to take a harsh line on both North Korea and Iran at his debut address to the UN on Tuesday, US officials said. They suggested his speech would urge the rest of the world to take a bigger role in confronting shared global threats, a central theme of Trump’s presidential campaign.