After three years of being banned by the Islamic State, soccer returns to the city of Mosul, yet facilities remain in dire need of repair. 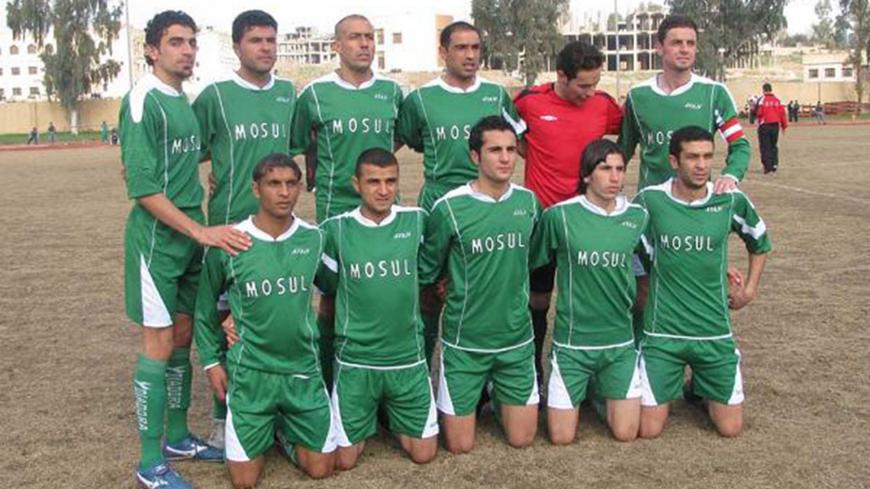 MOSUL, Iraq — Three years after the world’s most popular sport was banned in Mosul by the Islamic State (IS), soccer has returned to the city the terrorist group had claimed as its capital.

A soccer game between Mosul FC and the Ninevah police soccer team was held Aug. 29 in the liberated city of Mosul, on a field damaged by shelling and surrounded by dilapidated buildings, bleachers in disrepair and a few fans.

Nashwan al-Hamdani, a resident of Mosul, told Al-Monitor, “Seeing this feels strange. We have not had a soccer game here in three years.”

When IS took control of Mosul on June 10, 2014, it imposed sanctions on anyone who played soccer. These included the death penalty, which was the fate of six children.

Forty days after the liberation of Mosul, the semi-official game between the two teams took place at the University of Mosul rather than in Mosul FC’s stadium because a large part of the latter had been destroyed during military operations.

The game was not the first to take place following the city’s liberation; local teams had already started playing on smaller fields in destroyed neighborhoods.

“This is Mosul FC’s first game after IS took over the city in 2014, and it sure will not be the last,” Ahmed Al-Huraithi, the club’s media manager, told Al-Monitor.

A number of Mosul FC’s stars participated in previous competitions over the past months with smaller local teams in preparation for the big game.

Security officers and government officials in Mosul expressed their desire to support the comeback of sports and believe the game is the first of many post-liberation soccer games to come.

But soccer has not yet been able to regain the active status it had before IS took over Mosul because the city is still suffering from lack of services amid difficult humanitarian conditions. Mosul FC has yet to rejoin an Iraqi professional soccer league.

A number of Mosul FC team members and other players from the city met a few weeks ago with Iraqi Football Federation head Abdul Khaleq Massoud and talked to him about the need to support the city’s club. According to Huraithi, they received “positive promises” from him in this regard.

Athletes in Mosul are waiting for damaged or destroyed stadiums and sports facilities to be restored after IS used them as headquarters or as military training sites.

Mosul FC coach Mohammed Fathi told Al-Monitor, “The Iraqi government needs to save the infrastructure of the club and soccer facilities. Sports, and soccer in particular, must return to the city.”

As most of the soccer sports establishments are located in the western part of Mosul, a large proportion of them have been damaged, including the Mosul Sports Club. The damage to the half of the city located west of the Tigris River — known as the "right bank" locally — was greater than on the opposite side.

Ahmed Ghoussoub, a member of the media department at the Iraqi National Olympic Committee in Ninevah province, told Al-Monitor, “Only 40% of soccer facilities in the city of Mosul are in good enough shape to operate.”

Those in charge of organizing the semi-official game are looking to set up more games in the coming period to help soccer make a comeback in a city that has been deprived of sports for years.

It may be difficult, however, to reconstruct all sports facilities in Mosul over the next few years. The city, which is 80% destroyed, will need more than $1 billion to rebuild its basic infrastructure. Sports facilities may not be considered a priority here.

Regardless, the people of Mosul will play soccer all around the city, as local teams will turn rubble and ruins into their very own fields.

Meanwhile, Mosul’s athletes wish to see their city club playing again at the national level and regain a prominent position among popular clubs. If Mosul FC plays in the Iraqi Premier League with the big teams, its players would have a great opportunity to be discovered.

But Fathi regrets the current situation of the Mosul Sports Club and how IS has ruined it. All he wishes is to see his team “play in the Iraqi Premier League in Mosul FC’s stadium.”