The Turkish media is abuzz with the story of a secret agreement between the Kurdistan Regional Government and Israel to resettle Jewish Israelis of Kurdish origin in Iraqi Kurdistan after the independence referendum, and some quarters are taking the news as an indication of US support for Kurdish independence. 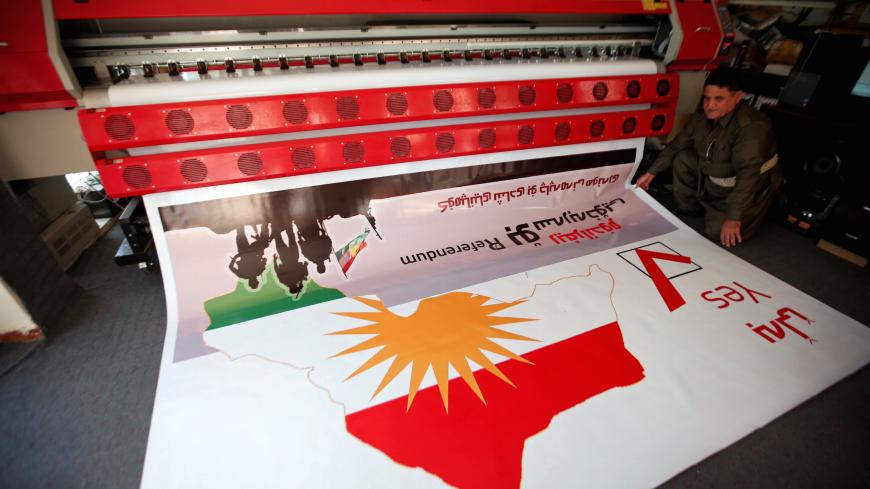 Several Turkish media outlets reported Sept. 13 that Kurdistan Regional Government President Massoud Barzani had reached a secret agreement with the Israeli government. The alleged deal involves the settlement of Jewish Israelis of Kurdish origin — a community of some 200,000 people — from Israel to the KRG after the independence referendum on Sept. 25.

Pro-government newspapers Yeni Akit and Aksam ran stories on their websites attributed to a magazine called “Israel-Kurd,” allegedly based in the KRG, that Israel will repatriate Kurds living in Israel to northern Iraq should Kurdistan become independent. The news website Internet Haber ran the news under the headline, “Barzani’s game revealed! Insidious Kurdistan plan.”

Another important pro-government outlet, Yeni Safak, commented that it may be Barzani, not Israel, who hopes to attract the 200,000 Jewish Kurds to Iraqi Kurdistan. Yeni Safak reported, “It is said that Massoud Barzani, who received support only from Israel during the referendum process, plans to strengthen his hand … with help from Kurds of Jewish origin who have prominent positions in Israel.”

The sensational if hard-to-believe story came amid another Turkish media blitz directed at Israel. Former Deputy Chief of General Staff of the Israel Defense Forces Yair Golan said at a Washington think tank Sept. 10 that the Kurdistan Workers Party (PKK), which has been fighting Turkey for independence and autonomy since 1984 (and is considered a terrorist organization by the United States and the European Union), is “not a terrorist organization.” Turkey’s Islamist news outlets agreed that Golan’s supportive remarks on an independent Kurdistan constituted “Zionist” support for the PKK. Interestingly, not a single Turkish media outlet covered Israeli Prime Minister Benjamin Netanyahu’s Sept. 13 announcement refuting Golan's words, Netanyahu’s labelling the PKK as a “terrorist organization” or criticizing Turkey for not recognizing Hamas as a terrorist group.

In all fairness, as other Al-Monitor writers have pointed out, prejudice against Jews or outright anti-Semitism in Turkey is not confined to the country’s religiously conservative government or its supporters in the media. Secular folks and even Turkish pop stars often say hateful things about Jews or Israelis.

Of course, Turks are not the only ones with a skewed understanding of Jewish and Israeli actions and motivations. Iraqi Kurds themselves hold strange notions about Israeli support for their independence. As we approach Sept. 25, more ordinary Iraqi Kurds express hope that Israeli officials’ statements in support of an independent Kurdistan bodes well for their putative state. Iraqi Kurds think that, given the powerful Israeli and Jewish lobbies in the United States, Israeli support for an independent Kurdistan basically means US backing for Kurdish independence. Some Iraqi Kurds think, if Israel and the United States are with Kurdistan, who can stand against us?

Yet many people in Iraqi Kurdistan and around the region are ignoring not only that the United States opposes the KRG’s independence from Iraq, but also that the Americans worry the independence referendum could upset the regional balance. Washington has refrained from criticizing Barzani or the Sept. 25 referendum so not to offend its Kurdish peshmerga allies that are putting up an effective fight against the Islamic State in Syria and Iraq.

Interestingly, despite the press circus, Turkish officials hold views similar to the Americans' when it comes to the KRG. Despite the dangers that Kurdistan’s independence may pose for Turkey (especially if it emboldens the PKK to stage more attacks), the Turkish government remains focused on maintaining its political, commercial and energy ties with Barzani and the KRG.