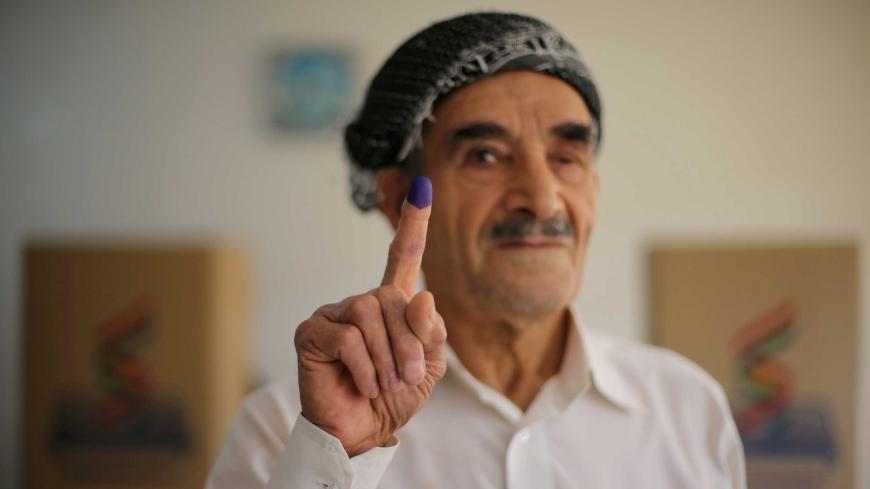 A man shows his ink-stained finger during the Kurdish independence referendum in Erbil, Sept. 25, 2017. - REUTERS/Ahmed Jadallah

Iraqi Kurds headed to the polls Sept. 25 to vote on an independence referendum despite continued strong opposition from neighboring Turkey and Iran, the broader international community and the Iraqi central government in Baghdad. Iran had long made its opposition to the referendum known, although how exactly Tehran would respond remained in doubt. It seems that the first step has been taken with the closing of Iranian airspace to the Iraqi Kurdistan region.

“With the request of Iraq’s central government, all Iranian flights to Sulaimaniyah and Erbil as well as flights passing through our airspace to the Kurdistan region have been suspended,” said Kayvan Khosravi, the spokesman for Iran’s Supreme National Security Council, on Sept. 24. He said the council had held a special meeting on the referendum and Baghdad's request.

“Hasty decisions by some of the officials of Iraqi Kurdistan limit Kurd's power to act through constructive dialogue in Iraq’s government and pose challenges to the security of Kurdish people and the country of Iraq,” Khosravi further remarked. The referendum, he added, “poses serious challenges for the region.”

The vote on independence was the top story in the majority of Iranian newspapers. Both Reformist and conservative papers took a critical stance on the vote. In Iran, the division of Iraq is viewed within the broader context of the possible further disintegration of Middle Eastern states. That Israel, Iran’s biggest foe in the region, has supported the independence vote, has played no small part in Tehran’s calculus.

Comments by an adviser to Iraqi Kurdistan President Massoud Barzani to Al Jazeera discussing the need for Israel’s continued support was the top story in the hard-line Kayhan, whose editor is appointed by the supreme leader, Ayatollah Ali Khamenei. The article asserted that the referendum and a future independent Kurdistan will “create a link” with Israel and that this relationship will be a “fatal blow” to Barzani. The article also noted that ahead of the vote, a number of Kurdish demonstrators had carried the Israeli flag alongside the Kurdish flag in northern Iraq.

The newspaper Iran, the official daily under the supervision of President Hassan Rouhani's administration, condemned the referendum in two front-page stories. One of the articles, by the analyst Majid Kousha and headlined, “One Referendum and an Endless Crisis,” held that despite the referendum, “Turning Kurdistan into an independent country is still very far off.” Kousha wrote that with the Islamic State in retreat, the vote could plunge Iraq into more war, especially over the fate of disputed Kirkuk, which is controlled by the Kurds and also has significant Arab and Turkmen populations.

Kousha noted that the vote on independence is not just a domestic issue, but could spark further fighting among Kurds and the central governments in Syria and Turkey, which could lead to a broader regional war. Iran has a Kurdish population, but they have not experienced the same level of violence as Kurds in Turkey and Syria have in recent years.

The Kurdish referendum was preceded by a flurry of diplomatic contacts and phone calls. Rouhani and Turkish President Recep Tayyip Erdogan conversed on Sept. 24, during which, according to Rouhani, they stressed the importance of Iraq’s territorial integrity. The Iranian president also spoke with Iraqi Prime Minister Haider al-Abadi. Barzani told reporters on Sept. 24 that he had in the preceding days met with Qasem Soleimani, the commander of the Islamic Revolutionary Guard Corps' Quds Force.